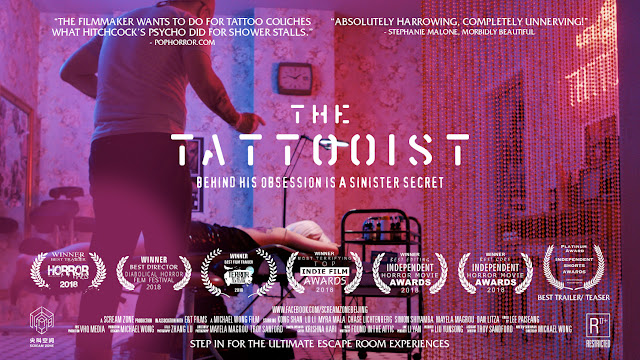 Malaysian director Michael Wong's The Tattooist is a micro short, coming in at just over a minute long. Rather than tell a cohesive story it acts more like a trailer for a bigger idea. Obviously with such a short length this isn't going to be the longest review.

A tattooist (Wang Yanhu) is known for his stunning work, however he has a dark side to him. For those who receive his best work are drugged and imprisoned in a Hostel style torture palace. Admittedly I got the plot not from the short itself, but by the accompanying blurb, though the trailer does a great job of showing this divide.

Starting off is a sweep through a clean and sterile tattoo parlour, jaunty music by Found In The Attic plays as we see the artist working on a girl. Then with a break with what seems to be the film footage burning up a quick succession of edited scenes of carnage play out in an art house style way. People screaming in cages, someone about to get a hammer to the face, a girl being dragged down a hallway by her hair. Then suddenly we are pack in the parlour, the jaunty music starts back up as the camera slowly pans away from the joyfully dancing artist.

I really liked the divide between the two disparate scenes, between the peacefulness of the attractive parlour to the Hell like dark and dank bloody rooms. For having no dialogue at all (unless you count screaming as dialogue) this makes its intentions clear, and the music alone adds so much character to this. It shows that even with such a small running time it is possible to really get an idea across, The Tattooist really is a fun little ride.