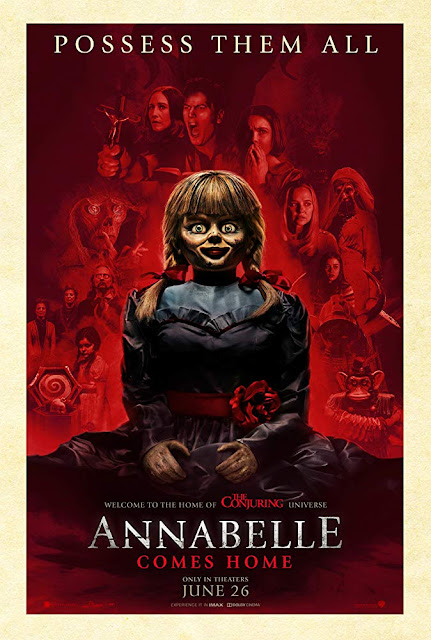 It turns out there was an installment of The Conjuring multiverse that I managed to miss (The Curse of La Llorona), not sure how that happened, I remember consciously not going to see it but no idea why! So Annabelle Comes Home (directed by Gary Dauberman) is the seventh in the series, the third film in the Annabelle series, and the sixth one out of the lot that I personally have seen. So obviously Annabelle started off as a spin off to The Conjuring. Annabelle was a misfire for me, though that is due to me expecting something different to what we actually got. I imagined a doll running around causing mischief, instead it is a demonic spirit that causes typical Paranormal Activity/Insidious style goings on. The prequel to this - Annabelle: Creation fared better as I knew what to expect. Now with Annabelle Comes Home we have a sequel to the mini story told about the doll in The Conjuring.

It is 1969 (allegedly) and is one year since the paranormal investigator couple Ed (Patrick Wilson - The Conjuring, Insidious) and Lorraine Warren (Vera Farmiga - The Conjuring, Godzilla: King of Monsters) have take possession of the cursed doll known as Annabelle, which, as Lorraine explains in the prologue (in which the couple are nearly killed by a runaway truck) is a beacon to spirits. The doll is kept in a locked room in the basement of their home in which everything evil they have defeated over the years is kept. Anyway the couple decide to head away on a trip and leave their young daughter Judy (Mckenna Grace - The Haunting of Hill House) in the care of teenage babysitter Mary Ellen (Madison Iseman - Goosebumps 2: Haunted Halloween). If that had been it then things would have turned out fine, however Mary's best friend Daniela (Katie Sarife - Supernatural) decides to visit the pair and it turns out she has an ulterior motive. Having recently found out about exactly what the Warrens do she has decided to find a way into their collection room to have a look around. In the process she ends up releasing Annabelle from the locked cabinet the doll had been kept in, and soon the Warren's house has turned into a place no one in their right mind would want to be... 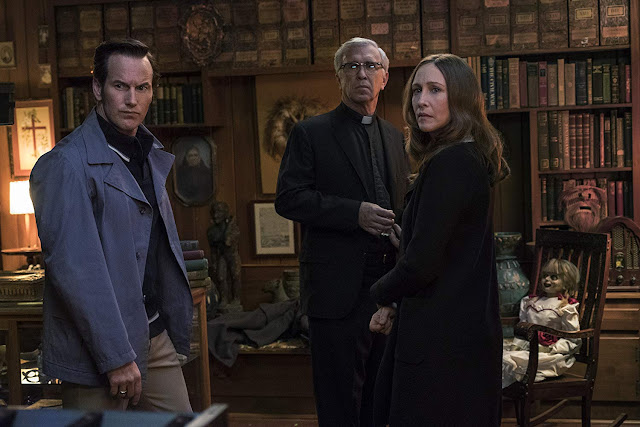 Here at The Rotting Zombie I am all about lazy comparisons, and so to sum up this film it is basically that part in Ghostbusters when the Ecto Containment Unit gets shut down, and all the ghosts and ghouls escape, made into an entire film, but localised to a single dwelling. This also then makes it fit easily into my second comparison, that this is kinda like Thi13en Ghosts due to the amount of key spirits wandering around the hallways. For a film with 'Annabelle' in the title, and with a trailer that featured her heavily it was actually a nice surprise to see the doll wasn't actually in this too much. Sure she is an essential part, and is a catalyst for everything that occurs but she was just one of many spirits here. The doll looks as creepy as ever, and has some nice enough moments (including a part where her shadow starts changing into that of a demon) but she was hardly the highlight. Obviously she features a lot in the finale, and I have to say I did really like how this all ended.

Maybe my favourite moments of this were the sections set in the collection room. It was great to see so many objects, many of which I could imagine getting their own spin off films. There is a cursed wedding dress that makes its wearers go psychotically angry, cursed samurai armour, cursed ancient coins. Basically everything in that room is cursed, and so during Daniela's initial exploration when she is touching seemingly everything I was waiting with baited breath for the horror to begin. Even for a semi-casual fan such as me though it was jarring to see the music box from The Conjuring appear in this room when it is very apparent this movie is set before the Warren's would have even got hold of that damned thing! The favourite object here for me was an old TV that shows events from exactly 30 seconds in the future, it led up to perhaps the creepiest moment here. The whole house has a decent design to it, I guess my complaint being how dark the film as a whole is. Different to the other films this takes place over a single night, but the Warren's house is ill lighted at the best of times so leads to plenty of murky moments. 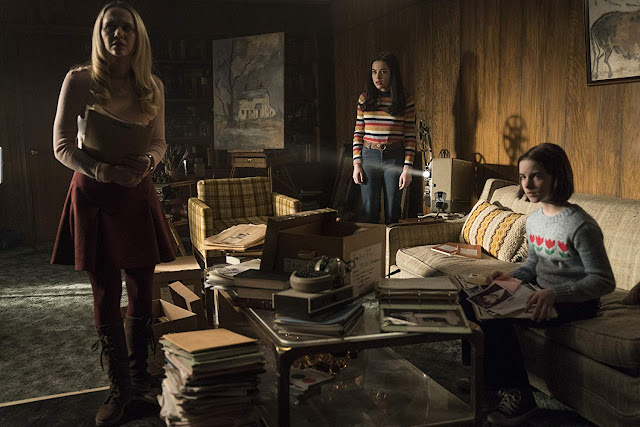 I liked all these different spirits doing their different things, even if it had a slight Goosebumps vibe to it. My problem was that due to where this movie took place in the timeline I just knew absolutely nothing bad would happen to any of the characters. If anyone had died here then I am sure the Warren's would have mentioned in one of their films set later in the timeline, about the time a bunch of evil spirits got let loose in their home and killed a bunch of people! So the stakes are low despite all the horror unfolding on screen. Which brought me to another issue. It is blatantly obvious something very wrong is occuring, yet the characters all seem to be in their own personal denials about the situation. Judy has her mother's gift of being able to see the dead, and so puts down her experiences to that. Daniela doesn't want the others to know she had been snooping and so keeps her mouth shut. And Mary just seems to shrug off her own moments (such as the TV, a tape player, and a record player all mysteriously turning on). It led to a growing feeling of frustration that the film wasn't hurrying up and getting to the exciting part of the horror stepping into the limelight.

When Annabelle Comes Home finally gets going it was entertaining enough. I liked that this was a whole team of evil spirits as opposed to just the doll, and I liked Grace's character of Judy in particular. Other elements were not as welcome, such as the inclusion of comedy character Bob (Michael Cimino) whose subplot about being chased around by a ghostly werewolf was always treated as a comical interlude. I also felt there were a few too many jump scare moments, one of which got me, but the rest could be seen coming from miles away. Always a lazy way to try and scare the audience (though it must have been working as the lady sat in front of me walked out about two thirds through). I have never been a crazy fan of this series, but they are still fun enough to see if you don't expect the world. Despite a lower score than some of the other entries this really wasn't a bad film, it just followed the format a little too closely.