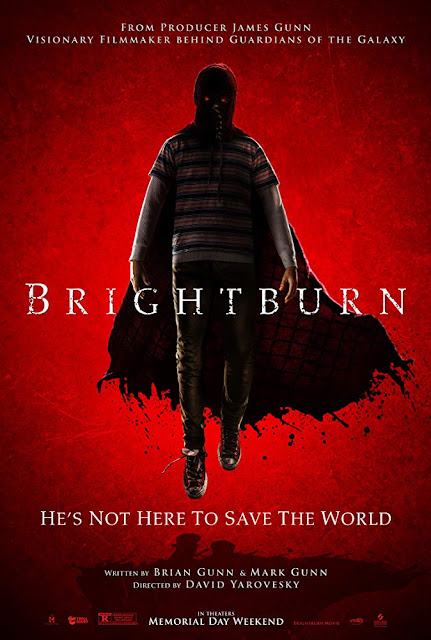 From the very first moment I heard of Brightburn (directed by David Yarovesky) it sounded like something really interesting. The films plot came from the one single thought - what if Superman had been evil? Due to the intense similarities to that hero this feels like an 'elseworlds' origin story. I love superhero movies, so having that concept twisted into something that was genuine horror appealed to me.

Tori (Elizabeth Banks - The Hunger Games trilogy) and her husband Kyle (David Denman - The Office) desperately wanted a child, and so when a strange meteor crashlands on their farm bearing with it a baby boy they decide to raise him as their own, rather than report this to the authorities. Twelve years later and the boy, that they named Brandon (Jackson A. Dunn - Avengers: Endgame) is celebrating his birthday. However it is at this time the craft that brought him to Earth starts to send out a signal that reveals to Brandon what his true purpose in life is, as well as reveals the very special, and very dangerous powers he has... 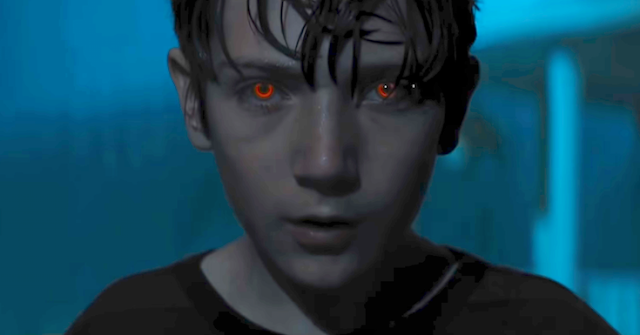 What I loved about Brightburn was her far they go with the idea of an evil Superman. This is very much an origin story, taking place around Kansas so there is focussed on the one small area of the world. I liked how bleak and dark this was, once the plot starts moving there are no moments of levity. The awakening of Brandon's powers can be seen as a contrast with becoming a teenager. Where before he was bright(burn) and happy, he has changed into someone sullen and rude, who just so happens to be able to melt peoples faces off with eye beams. Usually creepy kids irritate me no end, The Prodigy earlier in the year being a prime example. Here though Dunn gives a one note performance that works. Once he has awakened he realises he is literally better than everyone mentally and physically and acts with a disdain for one and all. While he does make excuses and tries to hide what he has become there is no fake emotion to go with that. He seems almost sociopathic in that there seems to be little understanding for the consequences of his actions. On the flip side of that though I could never really tell if the intention was that Brandon did care about some of the characters here, at least a little bit, or if even those closest mean nothing to him anymore. The other actors all do fine jobs also, as is usually the way the growing up of Brandon is shown via a quick montage and so you never really get a proper sense of his parents love for him. It was great to see Matt Jones (Breaking Bad) as a side character, he did comic relief well.

So the meat of Brightburn is Brandon's anti-superhero moments where he uses his powers for evil. Superspeed means he can be in two places at once, both at a remote camping trip with his parents, and stalking the girl from his class he has taken a shine to. His super strength is used against those he sees as doing him wrong, such as crushing the hand of someone, or picking up a truck and crushing its driver. There are some great moments here, not all of which were spoiled in the trailers. I especially loved the last death in this movie, it was a stunning moment with the perfect cinematography. These deaths are all held up with really gruesome special effects. Three in particular really stood out - a character who gets a shard of glass imbedded in the very centre of their eye, a character whose jaw gets utterly broken, and the previous mentioned eye beams through head. These all looked brutal, and are joined with various bloody painful looking wounds that are helped by the nasty sound effects of victims laying on the floor gurgling their last painful breaths. 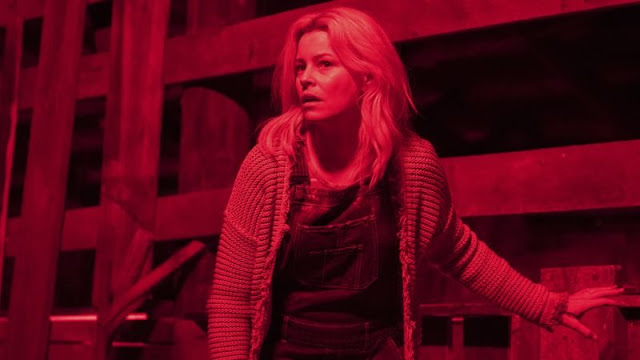 With old slasher films you would get the trope of the killer seemingly able to teleport around off camera, the Friday 13th films in particular did this a lot. With a flying maniac who can move at super speed this concept makes a lot more sense. Seeing Brandon hovering outside a window wearing his creepy woolen mask, and then having a character who saw this turn around and the kid is standing right there works so well. You get the unique horror of wandering how anyone at all could hope to defeat such a being, someone who is impervious to all damage and who has the maturity of a teenager. A lot of the horror comes from this fact, helped by some good moments such as discovering the twisted notebook Brandon keeps. I also really liked how this ended, this sets up a traditional finale with callbacks to earlier moments in the film, it all seemed very predictable, but then the rug is pulled out from under you and for me personally it went somewhere I had not expected.

I enjoyed Brightburn, sometimes dark and bleak is a bit too much, but here, with Brandon being the antithesis of hope it plain worked. I liked how the horror and superhero genres were melded together, how they used the characters young age and factored it into his change. It was also fun how they put some humour into the end credits, a great cameo by Michael Rooker (The Walking Dead, Guardians of the Galaxy) giving the most direct comparison from this to DC. It is perhaps not as unique as it acts like it is, I was often reminded of Chronicle (that did a similar thing but in a found footage fashion), but far preferred this. I wouldn't go as far as to say this is a stone cold classic, it is full of characters making dumb decisions, but it has enough good moments to be worth a watch.

Posted by Daniel Simmonds at 06:57