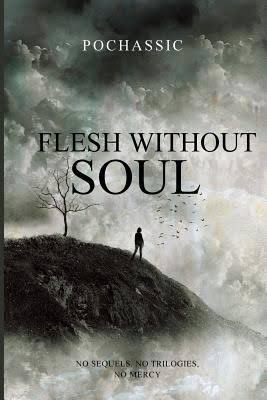 Everytime I come to review an eBook I say pretty much the same thing; that I built up such a ridiculous backlog over the years that I am working my way backwards through it, as I figure the earlier authors and companies have given up on me. So that is how I came to be reading Pochassic's zombie novel Flesh Without Soul that I received a copy of way back in 2016. While it has taken me a long time to get around to it, it is something I am familiar with due to the enticing email header that catches my eye every time I go into my emails -  'a zombie apocalypse with a sequel proof ending'.

Pizza shop owner Kara is invited to go see her brother Michael who lives in a commune outside of the small town she lives in. Once there she is unexpectedly attacked and captured. It turns out Michael is in fact the crazed leader of a cult. He has created an airborne virus that turns its victims into ravenous ghouls, and that his followers have already gone out into the world and released it. At first Kara thinks all the news reports she is being shown are part of an elaborate plot by her brother to brainwash her, but it soon comes to dawn on her that what she is witnessing is actually the end of the known world...

Flesh Without Soul is one of the stranger zombie novels I have read, and I think a lot of that is both due to its pacing, as well as its relatively short length (clocking in at 166 pages). There were also a few character shifts throughout that gave the book a bit of a disjointed feel to it. There was overlap, almost like the baton was being passed on, but it felt like there wasn't really a primary protagonist, and after the first one there wasn't really much development with them. It was interesting in that the majority of the book takes place well away from all the action, taking place as it does in a Doomsday bunker. This gave a unique angle of passively watching the unfolding chaos without any particular threat.

This worked as by the time characters get out into the actual world and witness the destruction the insanely fast virus has caused a lot of the action has occurred. We get introduced to Kara's sister Jane who off page has already survived a series of climatic zombie battles, and then later on there is a time jump that was slightly jarring. While these shifts in focus create gaps in the flow of the overall story it was fun that we, the readers are the only ones carrying on the knowledge of what has come before and so we appreciate the huge mistakes characters make, which they themselves are blind to. In terms of the pacing, it is around 70% if the book that takes place in and around the bunker, then 10% for the middle section, before the final 20% that occurs after the time jump.

So how about the zombies here? These are described almost like the ones in World War Z in that they appear in waves. Due to an impossibly ridiculous reaction by the governments of the world that I won't spoil (stupid as all Hell, but does make for an entertaining situation), the undead appear via rivers, the descriptions of the rivers being flooded with thousands upon thousands of rotting walkers made for some exciting moments. There are a mix of running and traditional slow moving zombies and there is a really neat twist later on in the novel that shows the story from the undead's point of view. Kind of like what David Moody did with his Hater series of books. This last part was pretty cool and explains a lot about the aberrant behaviour of the ghouls.

Flesh Without Soul was an exciting read, and it did have some good ideas going for it. For me it had the feel of a fever dream. Events happen so fast that it was at times a bit hard to keep up, characters got left behind just as they were getting interesting, and while it is a brave decision to write that way it was done a couple times too many for my liking. Going back to that original email header though, this is certainly zombie apocalypse with a sequel proof ending, and an ending that in my mind is perhaps the best moment to be found in this novel.