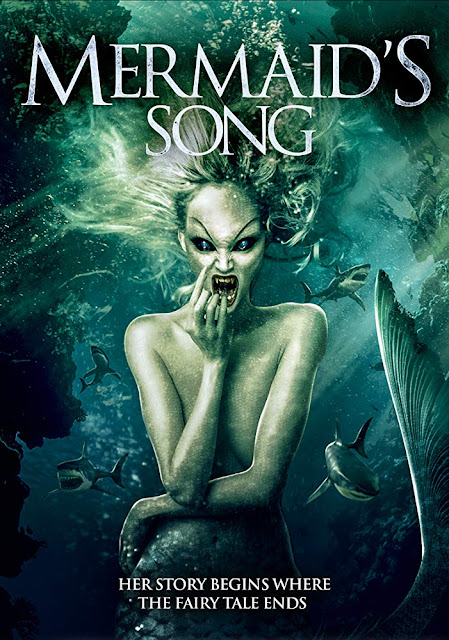 Mermaid's Song (originally titled Charlotte's Song) is a Canadian indie horror from director Nicholas Humphries (Night of the Living Dead Mexicans, The One That Got Away). It is set out as a homage to Hans Christian Andersen's The Little Mermaid and acts as a twisted sequel to that classic story.

This takes place in 1930's Oklahoma and is about a young teenage girl, Charlotte (Katelyn Mager - Supernatural, Percy Jackson: Sea of Monsters) who unknown to herself is actually a half mermaid/half human. Her father, George (Brandan Taylor - Supernatural, Bate's Motel) runs a club in which his daughters perform, but which has fallen on hard times ever since the suicide of his wife some ten years past. A local gangster called Randall (Iwan Rheon - Game of Thrones, Inhumans) offers to help George with his finances, but his involvement leads to things getting worse for the family. 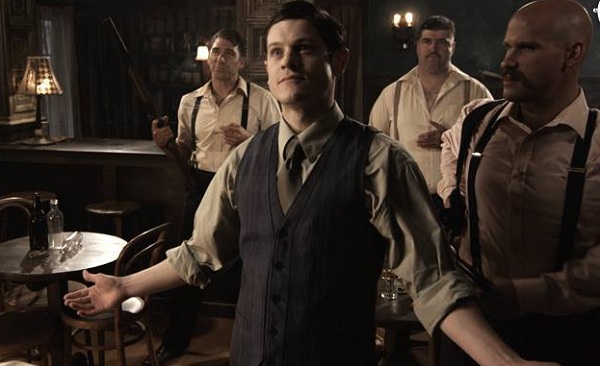 So, not much really happens at all in Mermaid's Song, and nearly the entire film takes place within the home of Charlotte. Despite this I never found myself bored with what was going on, I was entertained despite some issues I had. The illusion of being the 1930's was helped a lot by the limited location, as well as the costume designs, and the music itself which became a real highlight. The plot is limited in its scope. On the one hand you have the human side of the story that sees George seemingly forced into pimping out his daughters on the orders of Randall. On the other side you have a subplot about Charlotte discovering the powers she holds. For a film about a mermaid it was interesting how this more fantastical part was relegated to the smaller storyline.

While the plot is not anything major it is helped by some great choices of actors. First of all Mager shines as the teenage hybrid. Despite her young age the actress manages to be a compelling lead who carries with her a sorrowful presence. You could say there isn't really much to her character, yet she carried the film well. Rheon had the best part here, his Randall had a scene stealing playful malice to him that made everytime he appeared a highlight. Another good character was George's friend Tim (Steve Bradley - She Who Must Burn). He only had a limited appearance but he had an intensity to his performance. Then there is George who is just the worst. He is played competently by Taylor, it is more his character that is an absolute weasel. It is hard to imagine how he could have won the heart of the mermaid in Andersen's story, a complete fall from grace. Highlights of his cowardly nature include him telling some goons they should cut off his daughters finger rather his own when he is being taught a lesson, and at another point shooting someone close to him dead without a single sign of regret. He is a terrible human! 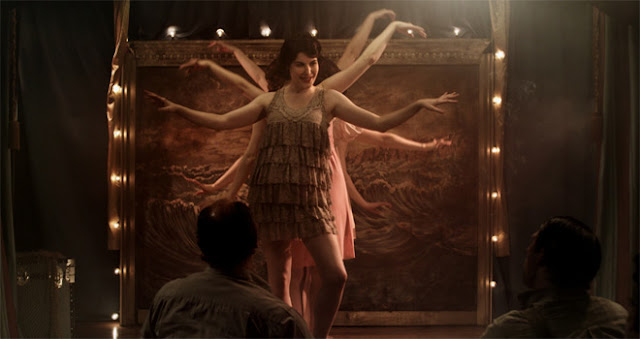 At times I felt Mermaid's Song might not even be a horror, but it definitely has some moments. Basing my knowledge from the Disney cartoon there is an Ursula type character, complete with monstrous tentacles at one point. Then you have the transformations of Charlotte that occur in two key scenes, including the action packed finale that channels Carrie 2: The Rage (the second time in a week I have mentioned that film oddly enough). Within the context of the film mermaids are able to brainwash people with their singing that at a base level allows them to envision their greatest desire. This feeds into the plot with Charlotte's singing drawing large crowds to the club. The song and dance moments are the most fun parts here with some great little tunes. The make-up design for the creature is decent enough, though special effects centre on extreme close-ups and so imagination is needed to create what was gone for. In terms of the directing it was fine enough, but the enclosed claustrophobic building the majority of the movie takes place in means there were no shots that felt all that exciting.

Mermaid's Song didn't do anything that was bad, and even elevated itself from being plain average. Some of the plot elements were a little fuzzy and it sometimes felt the limitations of the budget could be seen on screen. While this wasn't an amazing film I did like the sense of the time it was set in. I found myself caught up in the story enough that I didn't feel like it was an hour and a half wasted. Mermaid's Song was due to be released by High Fliers Films on 8th July.

Posted by Daniel Simmonds at 01:38