The Rotting Zombie's Round-up of Horror News for July 2019 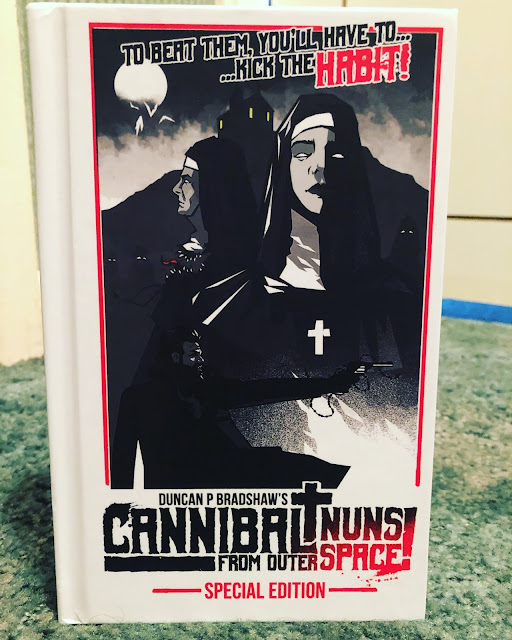 I'm writing this on a wet Tuesday evening. I love the rain, and it sure is preferable to the heat we have been having lately. As it dropped through my letterbox just the other day, I will start my saying Duncan P. Bradshaw's latest novel Cannibal Nuns from Outer Space! came out last week. His previous books of his I have read (Class Three, Class Four: Those Who Survive, and Chump) were all funny, as well as full of clever ideas so I assume his latest book I shall also love.

The video game Call of Duty: Black Ops 4 has had a new map released for the Zombies mode. It is called Alpha Omega and is technically a remastered version of Nuketown Zombies. However that original map is just a tiny portion of this reimagined one that now includes streets around that original map, as well as a huge underground bunker area. As well as the many zombies enemies here also include Lightning Hounds (electrified versions of the normal Hellhounds), Nova 6 Bombers (mutated version of the Nova 6 Crawlers), and Jolting Jacks (another variant of the Crawlers, these ones able to shoot lightning balls.

New horror film Clown Motel: Spirits Arise features a performance from Beauty in The Suffering of their song 'Reveille' which takes place during a key scene. The film came out June 4th in the USA, and released in the UK on July 29th. It is about a group of ghost hunters that accidentally meet up at an abandoned motel that is said to be haunted by the souls of deceased clowns. The movie features Ari Lehman (Friday 13th), Tony Moran (Halloween), Martin Klebba (Pirates of the Caribbean) and Chalet Brannan (Cyborg X).

Unveil the Strength (featuring former members of Five Finger Death Punch, Sacred Mother Tongue, Invidia, Flatline, Devolved, and Stratovarius) have released the music video for their single 'Hell's Never Over'. It originally premiered on Heart Support which is a place designed to bridge the gap for mental health in a relatable way that people and music fans can connect with.

Dark Wave trio Johnathan/Christian have released a new album titled Dark Hallways, and it is now streaming worldwide. This features seven songs dealing with themes 'of loss, uncertainty and the realisation of true vulnerability'. It includes interpretations of Pink Floyd's 'Nobody Home' and Kate Bush's 'Running Up That Hill'. The groups music is based on 80's Goth, Dark Wave and Romantic Death Rock.

In final music news for this month new Seattle Industrial band, Dracula Party have released a video for their song 'Trick or Treat' that is taken from their debut EP 'The Devil Wears a Mask'. The video was directed and edited by Dracula Party vocalist/lyricist, horror filmmaker Byron C. Miller (The Anatomy of Monsters). He wanted the video to feel like a modern successor to the Giallo films of the 1970's.

Hex Studios have announced news of their latest project For We Are Many, this is a demon themed anthology featuring  emerging filmmakers from around the world. This is to contain 13 shorts and features a host of horror icons such as Eileen Dietz (The Exorcist), Nicholas Vince (Hellraiser), and Laurence R. Harvey (The Human Centipede II). Each story is based on a different demon, from the succubus to a Native-American demon that drives its victims to cannibalism. More information can be found at the Kickstarter page.

Another Kickstarter of note that is currently running is for horror film Walking Against the Rain. This is a monster movie set six months after a biblical plague has swept the world. Two strangers set out across the barren landscape in an attempt to find each other. This is to be directed by Scott Lyus (Order of the Ram, Silently Within Your Shadow). This is near the end of its campaign (which it has achieved), so to find out more and get in a final pledge check out the page here.

Shooting has wrapped on Kill Giggles that looks set to turn the table on clowns by having them be the target of a serial killer, rather than them be the aggressors. 148 scenes were shot over a period of 20 days in 36 locations. This stars Michael Ray Williams (Watch If You Dare) and Ellie Church (High on the Hog, Headless), and also features Vernon Wells, Felissa Rose and Judith O'Dea.

The official teaser trailer for found footage horror Human Hibachi has been released by Cerrito Productions. The synopsis being that a movie intended to be sold on the black market in Japan was taken by the authorities. The footage follows two couples whose birthday celebrations at a Japanese owned restaurant take a turn for the horrifying. The limited premiere for this is due in October later this year.

Frolic Pictures are set to release 20 new rare grindhouse double features on DVD. I have mentioned Frolic before and admit it is down to the great film titles that I do include them in my news post. So the double features are as follows: Game Show Models/CB Hustlers, Guess What We Learned in School Today/Poor Pretty Eddie, The Alchemist/The House by the Cemetery, Metamorphosis/The Uranium Conspiracy, Star Pilot/UFO Target Earth, Night Train to Terror/Legacy of Blood, The Thirsty Dead/The Vampire Happening, The Witches Mountain/Crucible of Horror, Haunts/The Hanging Woman, A Bell From Hell/Delirium, King of King Island/Gappa the Triphibian Monster, Keep My Grave Open/The Ghost Galleon, Funeral for an Assassin/Funeral Home, Deadtime Stories/Deadly Harvest, Cathy's Curse/Virus, Love Me Deadly/Mama Dracula, Lord Shango/Isle of the Snake People, Bail Out/The Big Fight, and last but not least Panic/The Forest. Phew, that was a long list!

In final news a new trailer has been released for Off Grid. This is a 23 minute supernatural post-apocalyptic thriller starring James Cosmo (Game of Thrones), Alison Steadman (Orphan Black), and Marc Baylis (Coronation Street).