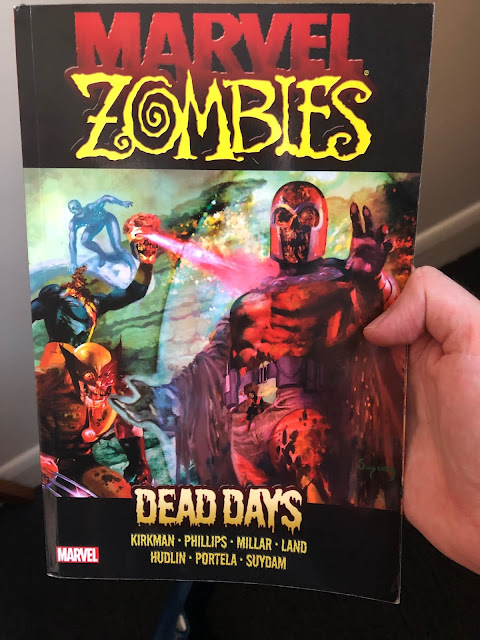 As may become apparent, I am on a bit of a Marvel Zombies kick at the moment, working my way through the parts of this long series that are contained in graphic novels. I started my reading of this with Marvel Zombies vs. Army of Darkness. Dead Days is more of a tricky beast though. The actual comic Dead Days was released in 2007, however the book Dead Days is made up of quite a few different zombie related stories that were released over a period of a few years. Due to this sometimes this book can have a bit of  a disjointed feel to it.

Starting off with the titular Dead Days itself then. This is a prequel to the whole Marvel Zombies series. I expected it to show the actual outbreak but instead it begins with a variety of top tier super heroes already infected, going on to show the spread of the virus to others, most notably the Fantastic 4, the X-Men, as well as the main undead cast of Marvel Zombies. This was written by Robert Kirkman, who of course is the writer of The Walking Dead. As I said in a previous review I enjoyed how this matches up with other stories going on. The best example being Spider-Man who tells M.J and Aunt May that he was attacked by Colonel America which matches up with that actual attack we see in Army of Darkness. This whole comic takes place during the events of Army of Darkness.

The next big story here is made up of Ultimate Fantastic 4 issues #21-23 and takens place between the end of Army of Darkness and the first Marvel Zombies book. In another reality there is no undead apocalypse, this versions Mr Fantastic has been working with a version of himself from a different reality to construct a device that can transport people between dimensions. Little does he know that it is all a trick by zombie Mr Fantastic to get his ghouls a new world to devour. Realising too late what is actually going on he must work together with some unlikely non-infected allies from zombie world to remedy his huge error. All this dimension shifting stuff makes my head fizz, but it was a pretty cool story. Due to Dead Days being a compilation there are plenty of references to events and people that I had no clue about. 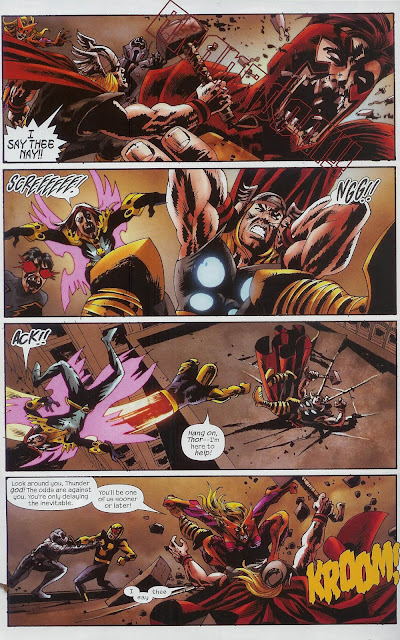 Next up is Ultimate Fantastic 4 issues #30-32 which serves a sequel to the previous story in the book, and takes place not long after Marvel Zombies 1. In the alternate dimension the zombified Fantastic 4 have been kept imprisoned by the non infected Fantastic 4. A event that was started in a story in between issue #23 and #32 means that the dimension jumping device that had been created might just be needed in order to save this world. This was another good story, at least on the zombie side of things. However I felt there was quite a bit of knowledge missing, and I found interactions between characters, such as Doctor Doom and Fantastic 4 to be a bit confusing.

The final story is made up of issues #28-30 of Black Panther and sees yet another reality. Black Panther, Storm, The Human Torch and The Thing from the mainstream Marvel reality find themselves transported through time and space to a Skrull planet, just as the surviving super zombies of Marvel Zombies 1 arrive to consume it. This was the weakest of the stories, mainly being that being from the main Marvel reality there was no chance of the heroes being in any real danger. Add to that that the super zombies are as intact as they can be when Marvel Zombies 2 begins and this is a low key story with zero stakes. Also I didn't really like the more cartoony art style here, everything was a bit too bright and colourful for my liking.

I'm glad I read Marvel Zombies: Dead Days, and it is cool how everything links up. However as a stand alone title it doesn't hold up, it only works within context of the greater series. Even with a page of text in between the stories explaining what has happened this still feels like large parts of the plot are missing. This becomes a nice side piece, but I wouldn't say it is essential reading.

Posted by Daniel Simmonds at 11:38