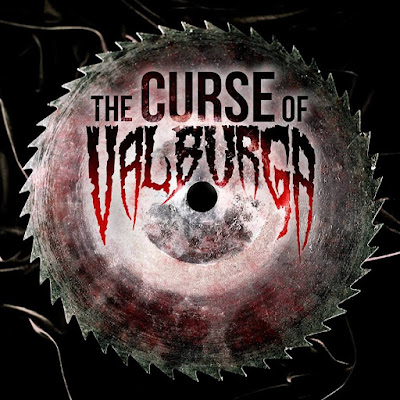 I think it was back in April of this year that I first mentioned the comedy horror The Curse of Valburga. The film is from director Tomaz Gorkic, whose first debut feature length Killbillies was said to have been Slovenia's first ever horror film. Like that, this too is set in Slovenia, though exchanging the vast mountains of that one for a dilapidated mansion, about as opposite as you can go in terms of setting.

Hoping to make some easy money, Marjan (Jurij Drevensek - Killbillies) comes up with a plan with his brother Bojan (Marko Mandic) and a mutual friend to scam tourists by giving them a fake tour of a mansion with a sordid past in Valburga. The mansion was said to once be home to bloodthirsty Baron Valburga who was brutal to the peasants he ruled over, and rumoured to be the cousin of Count Dracula. The plan seems to be working, with Marjan turning up at the property with an eclectic bunch of tourists that include among them goths, drunks, pornstars and criminals, all of which have ulterior motives for joining the tour. It is once they are in the mansion that things begin to go wrong, a family of cannibals happen to live in the basement, and they see the group as easy food...

Much like Wicked Witches that I saw the other week, The Curse of Valburga is stupid, switch your brain off at the door fun. Characters are not much more than stereotypes and do little to endear themselves. There isn't really a main protagonist, maybe Marjan who certainly gets more screen time than any other. For all this lack of meat I was surprised how long it takes for the action to begin. There was a nice twenty minute prologue of Marjan and his brother and friend drinking in a bar, then it is around forty minutes in the horror begins in earnest. There were a few little subplots going on, such as Vasily (Luka Cimpric) hoping to make a porn film, and a man hoping to find a mythical object said to be able to summon a demon. None of the side plots were too involving, and the main story just has people running around the vast empty mansion trying to find a way to escape.

There is a lot of death here, and eventually it becomes satisfying to watch. Initially with the first few kills they happen off camera, one in particular I found frustrating as a character is killed, but it is not even shown how they got killed, they just start spraying blood and fall over dead. Then there is a severed head which looked very fake. As the film picks up pace the kills get more gory, blood isn't something that is lacking here. From someone getting their foot trapped in a bear trap, to plenty of kills via a strange contraption that shoots buzzsaws, the bodycount is satisfyingly high. Saying all that there isn't much interaction between the antagonists and the victims, mainly it is just running away.

The villains of this don't really do much, I did like the design of the main one, a German helmet wearing masked man. The others don't do much other than crawl around on all fours and sneer. There is a reason giving for their living in the mansion which was nice, but it did feel like a bit of an exposition dump by having one of the cannibals randomly decide to tell a victim their history (even if that particular actor put in a great performance. There is a lot of swearing here, and dialogue is in a variety of languages, including English, German, and Slovenian. This is all helped with subtitles that were adequate, but prone to the odd spelling error. There is a lot of black humour mixed in here, nothing that was laugh out loud but it was consistent. Personally I enjoyed the drunk couple who acted as audience, always in the background drinking from cans, watching all the horror happening to the other characters in passive amusement.

The main element that lifted Killbillies for me was the beautiful setting. In comparison the empty, dusty mansion was a bit lacking for me due to some pretty sparse set dressing. Saying that it had some nice moments in terms of filmmaking, such as a great looking last scene. With a cast of mostly unlikeable idiots, a wafer thin plot, and not too much variety in the method of the kills The Curse of Valburga was regardless an entertaining movie.

Posted by Daniel Simmonds at 09:59