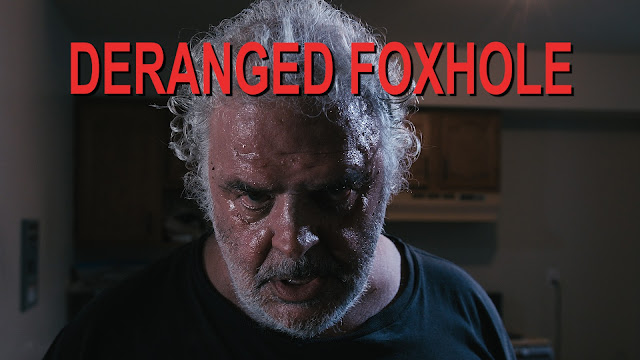 Deranged Foxhole is a short 16 minute horror film from Dave Sweeney, who wrote and directed this, as well as playing a character here. While not perfect there are some great casting choices, and it is full of nice cinematography and camera work.

Darlene (Jolie Curran) turns up at the apartment of Johnny Delmonico (John Calavanico) looking for her estranged father Jimmy. Johnny tells the girl he no longer lives there, and then invites her in for drinks. Wanting to find out more about her dad Darlene heads in. Later more people show up at his apartment, all with their own agendas.

The quality of the filming in this short was something that I appreciated from beginning to end, the shots are nicely framed, and I loved the lighting, that is used to best effect when showing the glistening sweat on the face of the slobbish Johnny. In tandem with this is the great soundtrack that complimented every scene it was in. From the chilled ambience while Darlene and Johnny are talking in his kitchen, to the more John Carpenter esque urgent beats of the more action orientated sequences, this was all very good stuff.

Calavanico was perfect for the lead role of the unhinged Johnny, from his very first appearance there was something notably off with his character, his presence made him the focal point of all of this. The other actors range in quality with most of them doing good jobs, in particular Nicholas M. Garofolo as the Detective stood out for me. In terms of the actual story here this was enjoyable, but the format of various people appearing at the apartment couldn't help but make this feel a little bit disjointed. I liked where this ended up going, as bananas as it was, but personally think some makeup, or effects should have been used to indicate dead characters as their appearance was all a little bit too crisp and clean.

Deranged Foxhole was a well made short that had quite a few good things going for it, from the perfectly cast main character, to the professionalism of the camera work, and the lovely score, this all unified for an enjoyable little film.

Thank you for your positive review. Your criticisms were well taken and fair. I wish I had more time and money to produce this but overall I was pleased as were you! Dave Sweeney

It was well made, with some great casting, thanks for sending it my way Dave!

And Anonymous - I'm glad you agreed with a lot of what I said :)

I came across this film and read the review so I watched this film. I found Johnny, Calavanico, a twisted well played character. Also the detective, Garofolo, in the fight scene with creepy Johnny was well played and filmed. This is worth the 16 minutes to watch this horror.

A lot of people seem to agree those two actors had the best scene.

Agreed. Fight scene is the best part of the film.