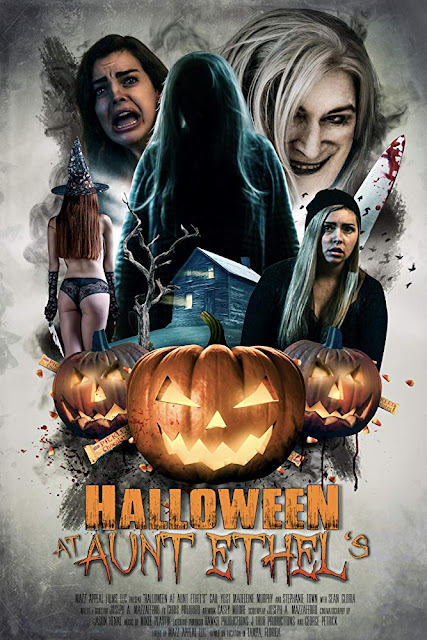 Halloween at Aunt Ethel's is a comedy horror film written and directed by Joseph Mazzaferro (Scathing). After a decent enough start I had hopes this might actually turn out to be good. However with a plot lacking substance, humour that mostly falls flat, and too much unnecessary archaic titillation it soon becomes clear this couldn't become anything really worth watching.

Best friend high schoolers, Melissa (Madeleine Murphy) and Mandy (Stephanie Town - Phantom Flyer) are walking home one day in October when Mandy starts talking about a local woman known as Aunt Ethel (Gail Yost - Anne). There is an urban legend in the area saying decades ago the old woman murdered her entire family, and that every Halloween she kills and eats anyone who dares trick or treat at her house. Melissa thinks the story is ridiculous, but it turns out to be true, and this Halloween Aunt Ethel has her sights set on the girl...

The best part of this entire movie is the prologue, so it was all downhill from there. It is established straight away that Aunt Ethel is in fact crazy, after she is shown killing two teens with an axe. This horror is quite comedy orientated but can come across as not funny, and at worst even a bit awkward to sit through. A lot of the jokes come from the Aunt Ethel character who attempts to be a wise cracking slasher in the vein of Leprechaun (it even features a terrible rap performed by the cast that plays over the end credits, much like Leprechaun 5: In the Hood did). For all the jokes here I can only think of one that worked for me, that of a trick or treating father and son deciding to skip Aunt Ethel's house when they hear screams coming from there during the finale. To the films credit though there isn't really many sex jokes, and bodily function jokes are absent altogether, these are often the most low brow type of jokes these type of films often include. It is also good that the comedy doesn't really get in the way of the action, there are moments here played for horror exclusively.

The story didn't have a lot of meat on the bones, there are late twists that provide motivation for the protagonists, but the way the story progresses didn't feel too smooth. Aunt Ethel's motivations are the most under developed, it being suggest she is cursed, yet what the curse could actually entail is never explained, making some story beats fall very flat. Coincidentally this is the second film in a row I have seen where the protagonist is forced to do something bad in order to save their own skins. The character of Aunt Ethel wasn't the best, she never comes across as very intimidating, mostly irritating. The scenes where it shows her hanging out at her house alone where always a chore to sit through. There are a few kills through this, but only really two that looked good, mostly characters are either killed off screen, or they are so sudden as to not be that interesting to see. On the plus side the few kills that are actually shown have decent special effects to them, aside from a terrible looking 'severed penis' prop. 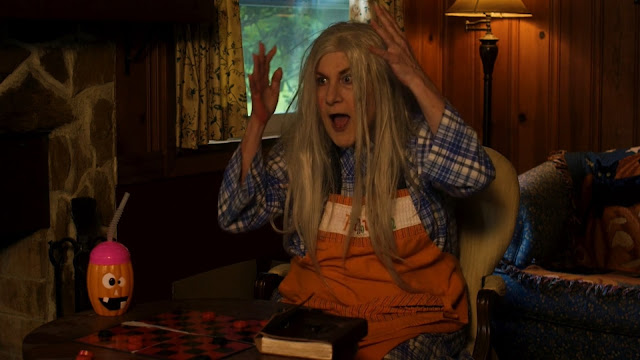 The way characters are treated felt very old fashioned, with the young female cast members in particular getting a rough ride. There is a third female friend of the two main characters who only seems to be in the film to walk around her bedroom topless, not really adding anything. Then Mandy features in a sex scene played for laughs that has her too on camera topless. Even the 'final girl' Melissa doesn't escape being sexulised with a shower scene giving this character the opportunity to walk around topless. It all felt so antiquated, not helped by the camera which often centres on the breasts of characters. This could have possibly worked as a homage to films from past decades, but this never felt like it ever was aiming for that, it just felt a little directionless in how it was all put together. I will say that this had some stylish moments, I liked how characters are introduced by having their names put up on screen next to them in a Quentin Tarantino way, and the CGI calendar marking off the days to Halloween was also decent. There was one shot at a party (that of course features an obligatory dancing montage) that impressed me, Melissa's boyfriend kissing a random girl in the background while all other characters in the shot are frozen in place to draw attention to this betrayal.

I would be lying if I said I had had high hopes for Halloween at Aunt Ethel's, but going from the prologue I at least thought this would be full of entertaining kills. Instead this struggles to impress, from the bland, nonthreatening antagonist, to the underdeveloped story, I felt this was just not that well made. Halloween at Aunt Ethel's was due for release on 21st October thanks to High Fliers Films.