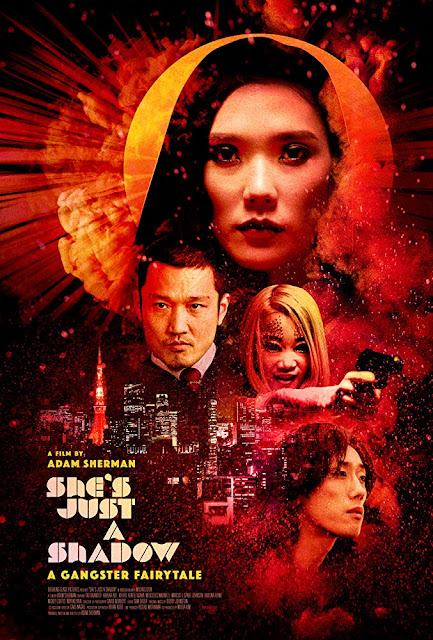 She's Just a Shadow is a Tokyo based crime thriller from director Adam Sherman. It really isn't horror based, but there were enough interesting elements here that I wanted to check it out. From blood drenched scenes to a sick serial killer, and almost art house style montages this sounded like something a little bit out there. But would it be too much style over substance (abuse)?

There are several storylines all revolving around a Tokyo gangster, Red Hot (Kentez Asaka), his partner Gaven (Kihiro), and his girlfriend Irene (Tao Okamoto) who is the head of a ring of prostitutes. As they struggle to defend their turf from a rival gang led by a man named Blue Sky, Gaven torn between two lovers fantasises about escaping from his life of crime, while Irene in a loveless relationship dreams of controlling the city. Meanwhile in the background a perverted serial killer sets his sights on Irene as his next victim. 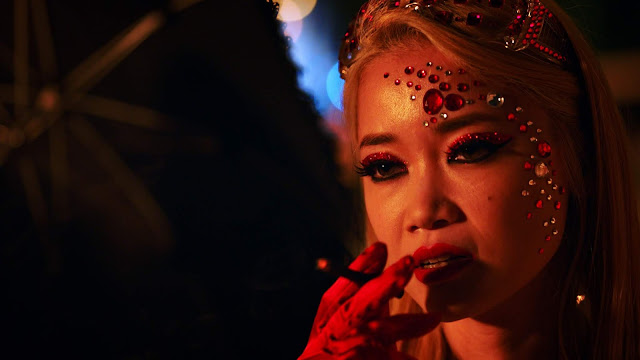 There really wasn't much plot here despite how many different plates are spinning. The majority of the characters spend most the film snorting copious amounts of cocaine and drinking heavily. This decadent lifestyle was draining to watch, with no end of montages of naked females doing crazed coke binges. In fact, with the exception of Irene nearly every female character here spends most of their time completely naked. It makes sense in that they are prostitutes, but on the flip side, outside of some stylish scenes there isn't too much going on. The heavy and often serious dialogue would like you to believe this is deep, but the sometimes corny script turns the lines into a whole lot of nothing. As far as I could tell everyone was miserable due to the way they are living their lives, but no one is that concerned about really making an effort to change it.

This looks great at least, with some nice cinematography, and a huge amount of blood that the camera always lovingly fits in. This starts as it means to go on with the serial killer tying a naked woman to a train track, before pleasuring himself while watching an approaching train arrive. There are some nasty scenes throughout, from physical and sexual abuse, to the aftermath of gun battles, and an early scene featuring a load of gang members getting slashed to death. Some of the best shots in the film featured the core cast slowly walking together as a unit down the streets of Tokyo. It seemed like there was a late decision to try and turn this into a Shakespearean tragedy with the majority of the cast ending up dying in various ridiculous ways. At least one of these was done as a purely comedic skit that culminated in a character getting hit by a truck and then flying off screen to the accompaniment of a Wilhelm scream. There was sometimes a tonal dissonance with bits like this that seemed opposite to the more serious nature of the rest of this. 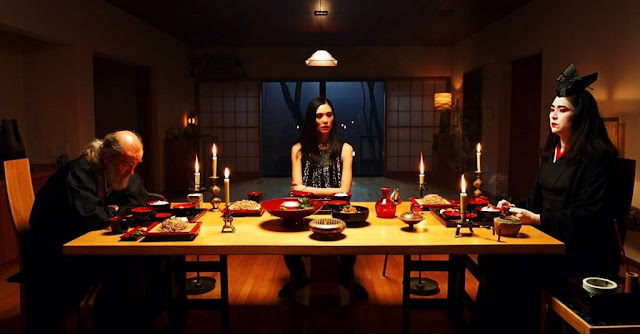 Visually this was arresting, from dream sequences, to stylised battles, and an often dreamlike tone in general. For me though the lack of any real character to root for let this down. The main characters of Red Hot, Gaven and Irene are all hardly likeable, Red Hot turning more psychotic throughout, while Gaven who could have been the films heart instead just comes across as a bit of a bland wet blanket. It felt like Irene's assent to primary protagonist came about a little bit too late in this two hour movie. The acting in general can be patchy with some actors obviously a lot better than others.

I found She's Just a Shadow to be a film I wanted to get fully involved with, but a weirdly wafer thin plot, and a mediocre script meant that often I just couldn't be able to. Visually this can be quite strong at times, despite far too many pre-sex montages of naked females messing around with other characters. At least there is a huge amount of blood here, and some nice little action sequences, but I left the film kind of glad it was over with. She's Just a Shadow comes to VOD and DVD on October 22nd thanks to Breaking Glass Pictures.