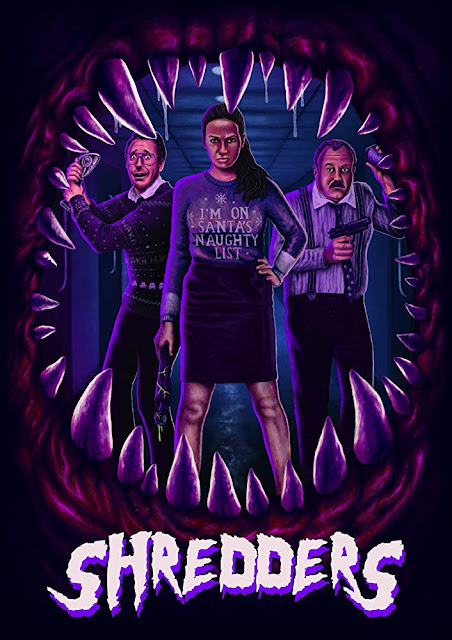 This past weekend was quite a lazy one for writing blog posts, thankfully though I had a lot of short films waiting to be watched for review, and so I bumped comedy horror Shredders up the chain a bit due to being just under eighteen minutes long. This was directed by Darren A. Furniss, and written by Michael James Dean (the director of Already Dead), who also co-stars here as one of the three main characters.

During an office Christmas party there is an outbreak of lethal murderous creatures, which leads to Stan (Dean) and boss Richard (Darren Ruston - Already Dead) barricading themselves in his office. Soon they are joined by fellow survivor Peggy (Sophie Mensah - Yesterday) who comes up with a plan for the three to avoid the monsters and escape the office block.

From the very start there is a sense of urgency to this, with the outbreak already in full swing. There is no explanation given which adds to the comedy elements that often work so well here. The comedy seemed very British with the humour mostly coming from the humourous interactions between the three characters. An early example being Stan and Richard barricading a door with a heavy desk, only for it to be revealed that not only is the door a sliding one, but the desk itself is on wheels. This absurdist humour runs throughout and always worked well due to how straight faced everyone acts, with a descent into out of place small talk during down time (such as when one of the characters asks Peggy what her plans for Christmas are while they are riding a lift). Characters never over react unless called for, and their calm interactions in the face of insanity was well done. Of the three the character of Peggy is the straight one, being the catalyst to bring the plot forward outside of the initial room. As such Mensah doesn't get that many funny moments, but the duo of Stan and Richard make up for that.

I really liked the feel of this, and I liked how it was filmed. Despite this being about killer creatures (named 'Shredders' due to apparently 'shredding' their victims) you never actually get to see them. There is one early part showing the silhouette of a creature through a clouded window, and later one glimpse of a creature at the very end of a long hallway. It is left up to the actors to react to these creatures who are nearly always off screen, done by the camera pointing at the characters, or later on, by the camera staying inside a lift as the characters go off screen to do battle. This really worked in saving on cost, surprisingly well in fact. The set design is sparse, but the amount of Christmas decorations everywhere was effective, as was the amount of screaming occurring from off in the distance. I guess any complaints I had was the slightly underwhelming end, and just a couple of the jokes falling slightly flat.

Shredders was a short that exceeded my expectations, it is very well made with some well lit locations, good music, and dialogue that was more funny than it should be due to the performances of the leads. All in all a great comedy horror that really leans into its strengths. Shredders will be available online on October 31st.

Posted by Daniel Simmonds at 05:10