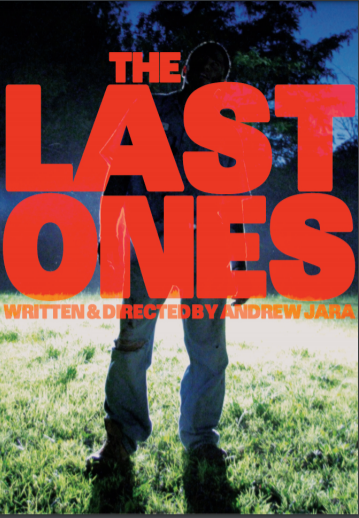 When I started this blog over 11 years ago it was dedicated to all things zombie. Over the years that focus shifted to include horror in general. So every time I get an actual zombie film to review I always feel a bit of excitement. It has been quite a while since I last saw one and so went into Andrew Jara's The Last Ones hoping for great things. From a brief bit of research it seems this was originally released in 2010 under the title Last Days, then it was re-released in 2017 in an edited shortened form, and with a switch from colour to black and white.

A deadly virus sweeps the planet that kills the majority of people it infects, some of those infected return back to life as flesh hungry ghouls. During the early days of this apocalypse gruff survivor Michael (Algernon D'Ammassa - The Cellar Door) comes across naive John (Mark Ocegueda) at his family home and they decide to team up. Nine months later and the pair are living a simple, if repetitive life at John's house, convinced they are the last ones left alive. By night Michael patrols outside the property, always on the hunt for the walking dead, by day the pair keep up maintenance of the generator at a local store, and attempt to grow food in their garden. One day while at the store John stumbles across a new survivor, a woman called Karina (Marcelle Bowman - Dark New World) and decides to bring her home. This leads to the last days of the pairs relatively idyllic existence, as she brings with her world changing revelations... 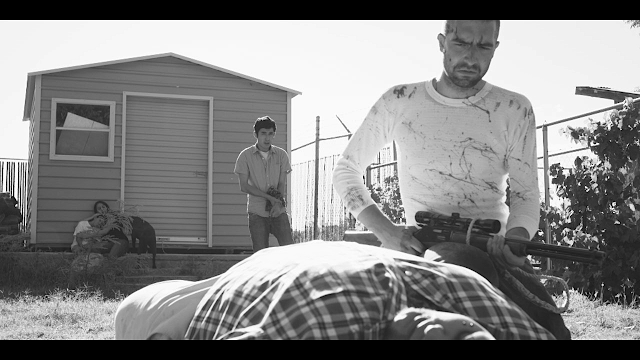 For the simple fact that this is in black and white I couldn't but help think of Night of the Living Dead. There is an almost timeless feel to the location the duo are based at with nothing to suggest a more modern time than that classic, of course that was a good thing. This plays to its indie roots by working very much with what its strengths are. There is a very small cast, and the story is so insular that it is easy to get caught up in this little story. There are no huge scenes of action and mayhem, instead this takes a page out of the original idea for The Walking Dead comic series, by focusing on the survivors and their interactions, rather than the undead hordes. Zombies of course do make an appearance, though the lore within the film means they never show up in great numbers, and like Richard Matheson's novel I Am Legend these creatures only seem to come out at night. The undead here are presented as acting as brain dead as they literally are, stumbling around, and almost oblivious to the living.

Excluding the ghouls there are only three characters here, all of which pay key parts in the progress of the story. While Michael looks like he would be a fearsome person, it was nice to see his friendship with John be something that was much more chilled. John is very innocent to the ways of the world and makes plenty of mistakes, such as constantly forgetting to turn the generator off, yet Michael never reacts too angrily to this, he has leaned into the role of protector and this seems to be the way he is able to survive day to day. They had an odd friendship yet the way they comfortably interact always seemed natural. Karina meanwhile in terms of story is the great disrupter, her presence brings about a lot of change to the dynamic of the duo, and the knowledge she brings creates the motivation for the story to really change up from what you thought you knew. The final third really ramps up the tension and action with some twists that were nearly well done but did also create a feeling of needing to suspend some disbelief in just how dense characters could be. 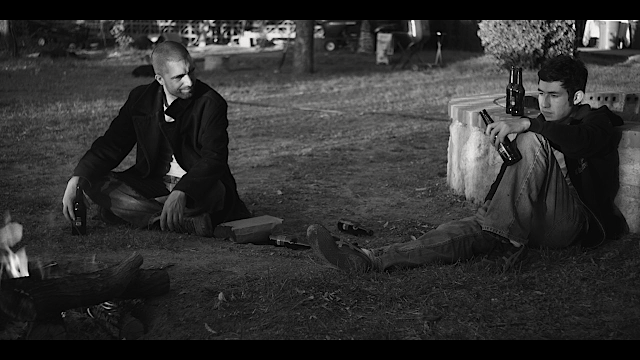 Effects are kept to a minimum but the black and white really helps with this. There are a few zombie kills but usually this is displayed from the camera being on Michael shooting off screen. Special mention goes to the soundtrack by Jordon Schranz, it had a nostalgic feel to it that worked well with the subdued visuals to make this feel like a movie older than it actually was. Some of the actors were better than others, though the dialogue throughout always seemed decent enough, with some good downtime of characters talking through their thoughts and feelings about what life has become. The zombie make-up is helped by the black and white, and their traditional 'old school' way of shuffling around meant they were always a highlight to see.

The Last Ones is a low-key zombie film that leans more towards the psychological impact of a worldwide apocalypse rather than focus on the violence of survival. I could see it being considered a little too slow paced for some, especially if you went into this expecting something more intense. Having not seen a zombie film for quite a while I had a lot of time for The Last Ones and found it to be something really quite enjoyable with the bleak, serious world it creates. The Last Ones is now on DVD and Blu-ray, available at Walmart, Best Buy, Amazon and Deep Discount DVD.