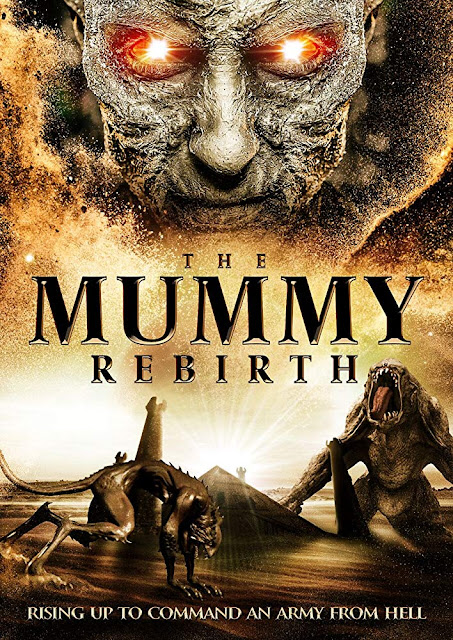 The Mummy Rebirth is a nonsensical horror that was co-directed by Khu (Snare) and Justin Price (The 13th Friday). Sometimes films can be so bad that they are good, and sometimes they are just so bad. This is a perfect storm of bad acting, bad special effects, and a bad story that was a confusing mess from start to finish.

From what I can gather; in ancient Egypt a priest named Sebek was murdered by guards of the Pharaoh due to having discovered access to a gateway between the world of the living and the underworld. Fast forward to present day and explorers Noah (Carter) and Daniella (Brittany Goodwin - Gears of War 3) are working for archaeologist Sager (David E. Cazares - The 13th Friday) who wants them to find Sebek's secret, which he believes is the location of a lost city. On their journey they end up betrayed by Sager and his men, and also accidentally resurrect Sebek, who is now in mummy form and is able to command the monsters of the underworld. 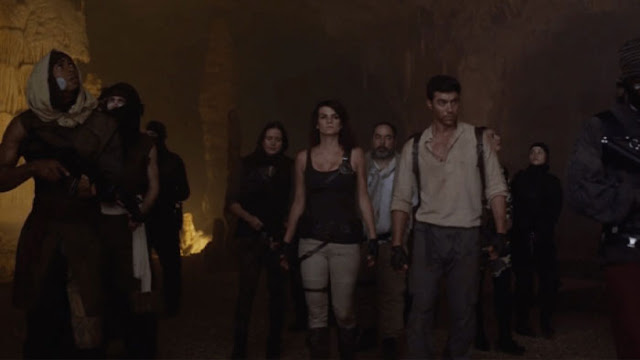 Try as I might I just could not follow the story going on here whatsoever. Partly that was my fault, I never got fully immersed in the film and so my mind kept wandering. Partly this was due to the terrible flow that led me to being permanently confused. There are a load of shoot-outs between the two heroes and soldiers of Sager, but these appeared to be happening long before they get betrayed, I'm not quite sure why they were fighting each other when there are also plenty of moments when they are just coexisting peacefully as well. Then there are the random scene changes that were quite disorientating. The locations in the film are as follows - cavern, museum, mansion, woodland, and then desert. All fine and good if there was any explanation for why characters are suddenly in different places, instead a scene ends and a new one begins with people in a different location with me clueless as to why they are there all of a sudden. This culminates in the ridiculous finale which picks up mid-battle. Noah and Daniella not two minutes ago were in a wood talking to each other, then suddenly they are caked in blood fighting a gigantic 60 foot tall CGI monstrosity for god knows what reason. It was all so confusing in a most off putting way.

The acting was also mostly quite terrible, though a lot of this comes from the directing I feel. Most actors here, especially the ones playing the soldiers just looked so lost and unsure of what they were meant to be doing. They walk around pointing their guns in random directions, often with a look of puzzlement on their faces. Sometimes scenes appeared to start before the actors were aware they were being filmed, none of which is helped by the poor dialogue, such as the mumbo jumbo Daniella and Noah speak whenever they are deciphering ancient Egyptian from the bad props. The props look so clean and new which make no sense when they are supposed to represent ancient scrolls and objects. The story just makes so little sense that it is hard to relate to anyone, this applies all the way to the movies end, it just seemed to end mid-story with nothing at all being resolved. I don't know if this was left open for a sequel, or if the plot was just so confusing that I failed to understand the relevance of that final scene. 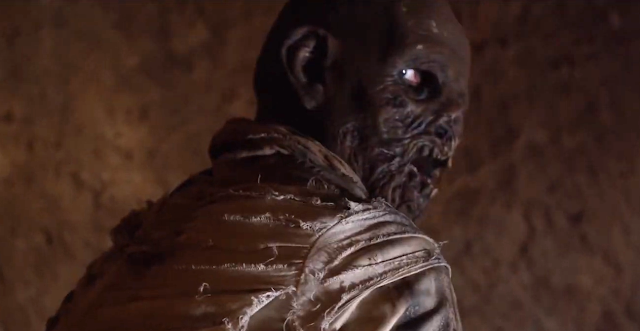 All that aside at least you can rely on some great special effects...though sadly there are none to be found. This reminded me of early 2000's horror with the stunningly bad CGI. There is a huge over reliance on this, from muzzle flashes, to helicopter crashes, and the abysmal monsters who not only look extremely out of place, but move around at a lower frame rate than the real people are moving at. The mummies are at least played by real actors, while their costumes aren't the best at least they manage to invoke a little bit of a feeling of a zombie film.

The Mummy Rebirth barely manages to make itself feel even a little bit worthwhile to watch. The mess of a plot means enjoyment can't be gained from seeing that play out, while the action scenes somehow manage to come across as very dull. There was little to like in this The Mummy clone, which was a shame. You don't need the biggest budget to make a fun film, but here the constantly punching way above its weight effect bleeds down to make this one to avoid. The Mummy Rebirth is due for release on 7th October thanks to High Fliers Films.

Posted by Daniel Simmonds at 13:17