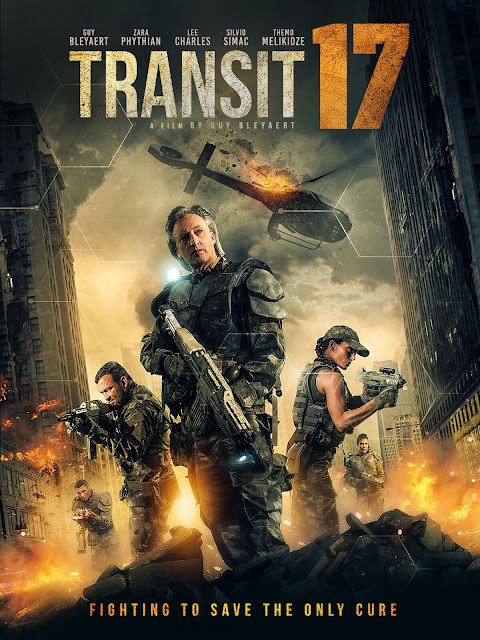 I am always more than happy when a zombie film is sent my way, and so upon hearing about Transit 17 I knew it was something I needed to see. This was written and directed by Guy Bleyaert (The Last Inquisitors) who also has a starring role here. Despite featuring the undead it would be disingenuous to call this a zombie film, as those creatures sadly only appear in the one scene. However, despite this I found Transit 17 to be an entertaining watch despite any issues that popped up.

The film takes place in a world where a virus caused worldwide zombie apocalypse six years back. During this time a group calling themselves 'Marshals' (I may be wrong on the name) took over control of Europe, their aim to not only wipe out all the undead, but also to wipe out any opposition to their rule. To counter this a resistance group emerged that seems to be made up of ex-military. The resistance learns of a possible cure for the deadly virus, and are tasked with delivering a teenage girl to the UK that will facilitate the creation of a vaccine. A group of soldiers led by Tex (Bleyaert) that include among them Eve (Zara Phythian - Cannibals and Carpet Fitters, Doctor Strange) and, Brad (Lee Charles - Cannibals and Carpet Fitters) set out to complete this dangerous task, helped by their handlers who include Snow (Stefanie Joosten - the inspiration and voice of Quiet in Metal Gear Solid V: The Phantom Pain). 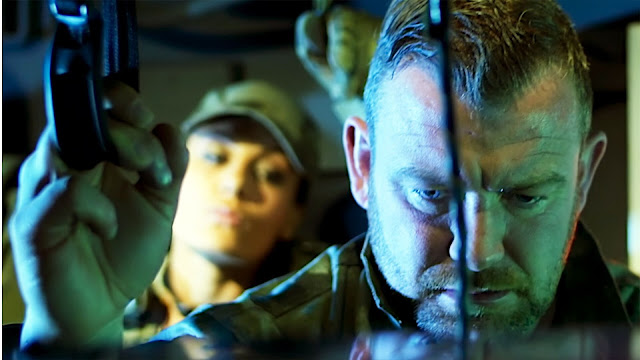 For such a grandiose story there were going to be constraints with how Transit 17 was created. One of the most obvious ones here is how sparingly the outside locations are used. Outside of a few key scenes around two thirds of this takes place inside, whether it be inside an armoured vehicle while travelling, or inside a variety of disused warehouses. The scope of the devastation of the virus outbreak is only ever suggested, though there is a good sense of this in how the characters talk. The other obvious constraint was the overarching use of CGI. Sometimes this could be a problem, but Transit 17 really goes all in with this, everything from muzzle flashes, to explosions is full of CGI that looks slightly too clean. I didn't mind this though, as most the time it was not bad, and when it was bad it was funny rather than distracting. A whole sequence involving a helicopter looked quite terrible, but this one section managed to look so bad it swung the other way and become entertainly so, I let out a happy laugh with the culmination of that scene. Elsewhere the CGI really works wonders. This takes place in the near future, so has sci-fi elements such as computer interfaces everywhere, and holograms. Scenes taking place in the antagonists base were a highlight, I loved the parts that have the main bad guy, credited as 'Commander' (Silvio Simac - Transporter 3) talking to a hologram of his boss.

I wasn't expecting much in terms of scenes of action, but again I was pleasantly surprised. Shoot outs felt fun, and there are a few moments of close quarters combat that were well choreographed, which were helped in no small part by at least Phythian and Charles having done stunt work in previous films. There were also two different chase sequences, the previously mentioned accidentally funny helicopter one, and an exciting car chase. As I said at the start of this review there is only the one scene involving zombies. Lack of the undead is explained away within the film, apparently the group in power have done such a good job that they have managed to somehow kill three quarters of the worlds zombie population. It is a shame the ghouls only appear once as they had a good dirty look to them, I was reminded ever so slightly of the look of the undead in Romero's classic Dawn of the Dead, though here CGI is used rather than much actual make-up. The vast majority of the time it is human versus human encounters, I couldn't help but wish zombies had also shown up in these sequences to give an added threat for both sides. 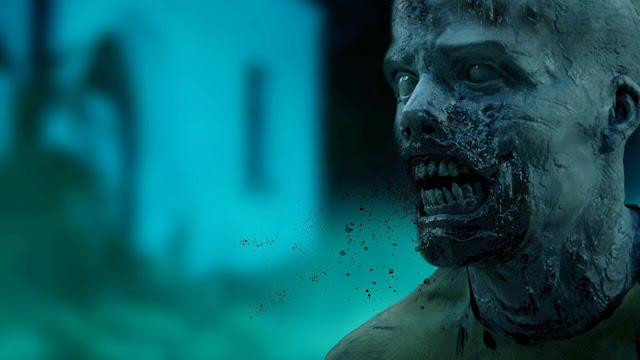 The general plot was good enough on paper, a simple enough story even if it can be confusing to follow at times. The first fifteen or so minutes is the set-up, yet it is all wrapped up in such technical terms that something really simple became quite hard to understand. Zombies are called 'runners' despite them never being shown to run, the bad guys are referred to as 'sniffers', and there is much mention made of jammers. Some bits of the story didn't feel like they even needed to be there. For instance much is made of a mercenary group that are needed to destroy a jamming tower, yet this sub-plot takes place over just a few scenes quite early on, then this group is never mentioned, or shown again. The same goes for the main characters, with some of the resistance soldiers getting captured by the enemy group. They are then even shown later on in torture scenes before completely being forgotten about and never mentioned again also. Much is made of Commander, and he is built up to be a big threat to the mission, yet he is underused, and leaves the movie in a comically underwhelming fashion.

Transit 17 is a movie that has a lot of ambition, and it is impressive how much it manages to accomplish. Characters are quite flat and uninspired, but for me I found this to create a feeling of wholesomeness, every one is exactly who they first appear to be, they play up to their sometimes cheesy, sometimes stereotypical roles well and so I couldn't help but find it all entertaining. I wish there had been more undead in this, I felt that would have elevated the film for me, as it was though, it was still a blast to watch if you go in with the correct expectations. Transit 17 became available on VOD on 22nd October, and it is due to come to DVD on 17th December.

Posted by Daniel Simmonds at 15:54