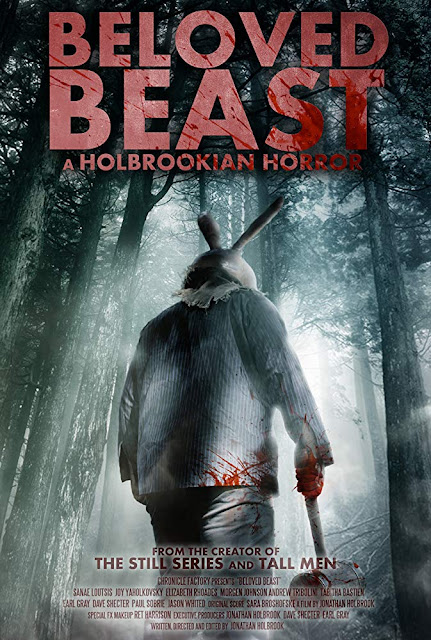 When I sat down to begin watching Beloved Beast I was a bit taken aback to discover it was nearly three hours long. Sometimes people just don't know when to edit and so I was worried I was going to be in for a snooze-fest. However, there was only really one scene that felt a bit over long, surprisingly the vast majority of this horror was excellent.

After being in a car crash that left both her parents dead, a young girl named Nina (Sanae Loutsis - The Black String) is sent to live with her Aunt Erma (Joy Yaholkovsky). Erma doesn't want to be looking after the girl as she would much rather be drinking and doing drugs, and so she neglects the girl, leaving her home alone for days at a time. Elsewhere a dangerous mentally retarded man (Jonathan Holbrook, who also wrote and directed this) escapes from a nearby asylum, and stumbles across Nina as she is getting attacked by some local teenagers in the woods. He kills her attackers, and due to wearing a rabbit mask that she had lost earlier, and with the head injuries she sustained in the car accident, she identifies him as her saviour and invites him to come live with her. However it starts to become more and more apparent to the girl that the man she calls Harvey cannot control his murderous impulses, and soon friend and foe alike are in danger of the 'Rabbit King' and his wooden mallet. The killers actual name is Milton, but for the sake of this review he will be known as Harvey due to that being the name he is most referred to as by the protagonist.

I loved this film, from the very start I was drawn in to this very bleak world. It starts off with the car crash scene which showed off the great make-up effects for corpses, the blood looks congealed and plentiful, a visually attractive choice that worked so well for the many, many corpses, this has quite a high body count! Often it would be hard to identify with a main character who is so obviously twisted, yet by setting the film in such a nasty place means that the majority of the victims are more than deserving. I did think it was a bit over the top just how many degenerates and criminals live in the town, but this is specifically brought up in one scene in which policeman Paul (Morgen Johnson - Grimm) has a conversation with his superior about why such a small town needs eight coroners. It is still pretty ridiculous that on one small walk Nina gets robbed at gunpoint, witnesses a kidnapping and a murder, and then nearly gets murdered by Satanists! A bit over the top for sure but it does make the scenes of violence more satisfying.

Being such a long film there are a variety of stories going on, I liked how quite a few of these turned into red herrings with the stories not really ending up anywhere. As well as Nina and the escapee you have Paul and his hunt for Harvey, Erma and her miserable exploits, as well as local gangster Ash (Earl Grey) and his sordid dealings with a dangerous crime lord 'The Belgian'. I figured the main storyline would be about Erma's gradual acceptance of her niece, and I am glad it was never as predictable as that. Erma is a nasty human being, self centered and bearing a huge grudge against the world. This is best shown when she decides to have sex with a man she just discovered was the person responsible for the car crash in the prologue that killed her sister, all in order to score some drugs. She does feature in some pretty cool looking drug sequences though, an early one that has her partying with Ash and his friends features some trippy blurring effects, and then later she features in a memorable scene when she is tripping on mushrooms while dressed like a geisha, that features a painting on the wall melting. There are so many different layers to Beloved Beast, it even becomes fairytale like at times with a narrator creating a fantasy world that the rabbit obsessed Nina is imagining.

So this has a large body count with the most common weapon of choice being a huge wooden mallet. Harvey had an iconic look to him, Holbrook has an intimidating presence to him, helped by the great rabbit mask, and the loud footsteps that are added whenever he walks about. I also appreciated that he never talks, always good for a psycho killer. These moments of violence are frequent and all look decent enough, whether it be a bowie knife through the chest, or a hammer embedded in someone's skull, this is attractive violence. This also features a great soundtrack, there were more than a couple of times I 'shazamed' the music playing so I could add it to my Apple tracklist. I went into this expecting to be bored, but I was really drawn in, even so this wasn't something I was able to watch in a single sitting, in the end it was three different sittings in order to fit this into my schedule. There was only really the one scene that felt overlong, a scene involving a comedic drunk fisherman went on for far too long and added nothing at all. This was all filmed in a great way, shots were lovingly framed. This excels at making characters sympathetic when they shouldn't be, Harvey is someone I even ended up rooting for, and the scene at the end with him and Nina was memorable. Nina herself doesn't really say much throughout, but you can put that down to the obvious head injury she has that has caused her to emotionally shut down somewhat.

I really like it when a film pulls you right into its created world. This may seem unreal, but it works as an enthralling piece of movie making. On paper this would seem to be quite a simple story, yet it is all told in a fascinating manner. Many disparate plot lines that all come together for the thrilling third act, a high body count, great music and make-up effects, and some decent acting combine for something that was an experience to watch. Beloved Beast came out on 11th October thanks to Indican Pictures.

Posted by Daniel Simmonds at 09:33