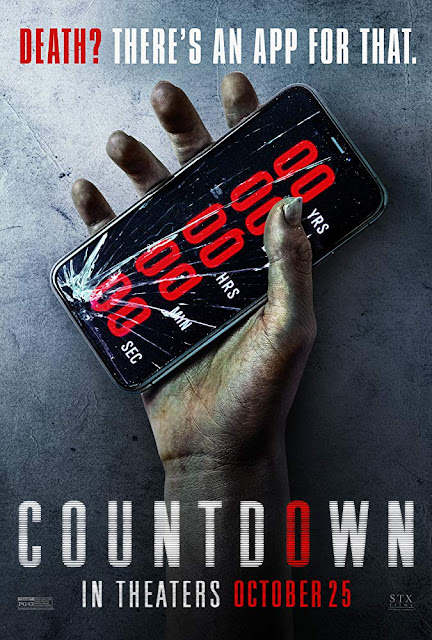 When I first saw the trailer for Countdown (written and directed by Justin Dec)  I wasn't that taken with it. It seemed like yet another by the numbers horror that brought to mind One Missed Call. However everyone else seemed to really be looking forward to it. The Fright Meter Awards committee I'm a part of seemed excited to see it, and I overheard people at my day job saying how much they wanted to see it. Then, an hour before I was due to go see it for myself I received a text from my sister saying she found it so scary that she couldn't last till the end and had left halfway through, followed soon after by her boyfriend. This gave me a greater desire to check it out for myself, to see if I could finally find a horror legitimately scary again.

Quinn (Elizabeth Lail - Unintended) is a nurse who one day learns that one of her patients believes the operation he is due to have is going to kill him, due to a phone app called 'Countdown' he downloaded that allegedly predicts when someone is going to die. She decides to download it for herself, thinking it to be nonsense, but later learns her patient did indeed die. Her own stated time of death is in four days time, and after a series of frightening hallucinations she starts to believe the app is legitimate. She ends up teaming with a man named Matt (Jordan Calloway - Black Lightning, Riverdale) who is also destined to die within the next few days, and together they set out to try and find a way to survive past their predicted death dates. 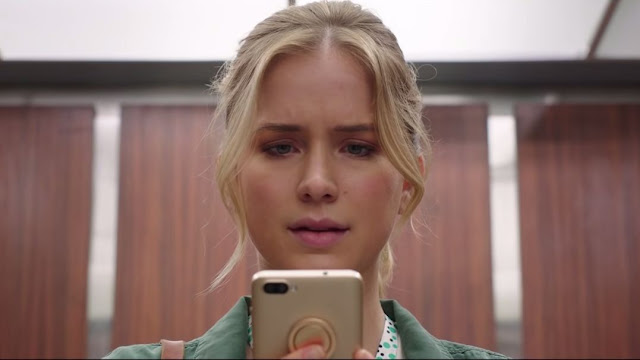 So this does indeed share similarities with One Missed Call, but more so it felt this was familiar to Drag Me to Hell, The Ring, and the Final Destination series. Having a specific time frame with which to cheat death was prevalent in all of those movies and so from the beginning this never felt too original. This has a strong first act, but this became to the detriment of the overall film as all the most creepy parts were front loaded here. By around the halfway point the horror has mostly been diluted, with it just being a race against time for Quinn and two others to save themselves. I felt that it would have benefitted this more if there had been more victims, as the victim count is low here, where something like the Final Destination films have more victims, and more inventive deaths. I liked the idea that if you changed what you had planned to do in order to prevent getting killed then you would still die anyway, but with each death shown it gets less and less unique. This wasn't helped by the scariest kill in the film being shown in the trailer, so I knew it was coming.

The main characters are typical accidental hero types and didn't do much to offend, even if they never stuck in the mind either. Better were the comedic side characters that appeared. Usually comedy characters irritate me no end in horrors, but with them not in peril I didn't mind the humour they brough. In particular comedian Tom Segura as a phone shop owner, who had all the best lines, and the great combination of priest and geek that was Father John (P.J Byrne - Rampage, The Gift) who could barely contain his excitement at discovering demons were real. The idea of the app was neat enough, but I did feel the hauntings and hallucinations the characters experience were only really there to try and create scares, rather than adding anything to the plot. Saying that, I did think the part in the bathroom was effective (this was also the scene which made my sister walk out), but as the film moves on these sequences work less and less well. 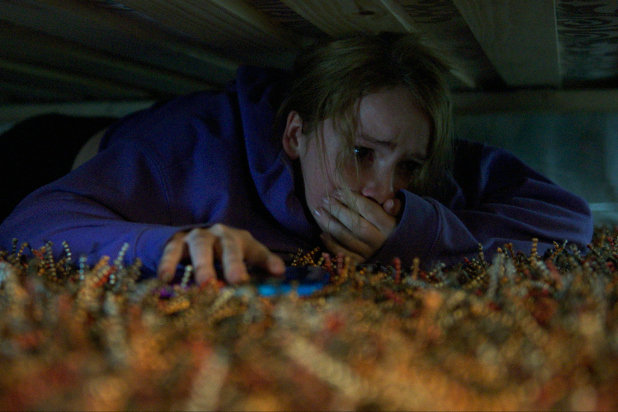 By the finale it all comes more physical with the evil force, or whatever it may be relegated to not really doing much. I guess if your whole thing revolves around killing people at a certain time then in the lead up to that you are kind of powerless. I felt the last third was the weakest, and went against the rules of the world up to this point. Early on characters begin to be attacked before their time is up, with them finally succumbing to their injuries when their timer runs out. By the finale though much drama and tension is made about a timer ticking down, but the victim remains fine even with seconds to go, when earlier the force would have already begun killing them by that point. In terms of what Countdown gets right, its biggest plus from me is the use of the app. The noises it makes, and how it influences scenes led to some of the better moments here, the sound design was spot on for this. In a great move for marketing there is a real Countdown app you can download (I have 33 years left according to mine).

Countdown matched my expectations. I expected something along the lines of films I had seen before and this was exactly that. The hype I had heard for this was not deserved though, sure it had some creepy moments, but it is unable to sustain these moments past the scenes they occur in, leading to a sometimes disjointed feel. I also felt the cause of this curse wasn't too exciting, or that great of a design. Still, it wasn't terrible, certainly no The Bye Bye Man, but I left the cinema wishing (as I often do) that Final Destination would come back, as they were the very best of these types of movies.