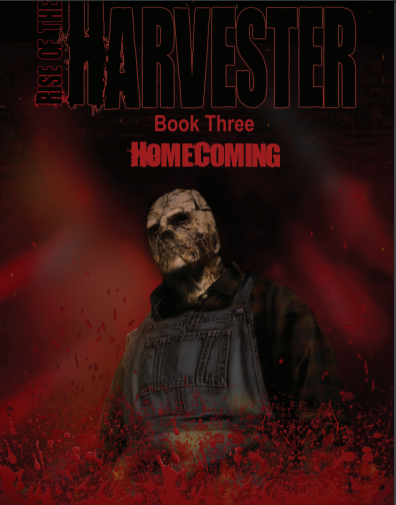 Rise of the Harvester is a horror graphic novel series that I hadn't heard of before getting the opportunity to review the latest book; Rise of the Harvester: Book 3 'Homecoming'. Obviously having not read the previous books I would be at a disadvantage, though I was curious to find out just how much prior knowledge would be needed. Some spoilers for previous entries to follow. The series is about a supernatural slasher villain known as the Harvester, in the second book 'Con of the Dead' the killer slays his way through the attendees of a horror convention, eventually escaping when the authorities mistake a cosplayer of the Harvester for the killer himself.

'Homecoming' picks up seven hours after the end of the second book. A survivor in an interrogation room tries to tell detective Warner, and Dr. Johnson they got the wrong person, but they don't believe her. Meanwhile a strange murder has occured back in the area that Samuel (the Harvester) used to live when he was alive. The two men travel there to investigate, Warner is sure it is all unrelated to the carnage at the convention, but Johnson thinks otherwise. Events lead them to a showdown with the unstoppable killer, will they be able to finally stop his path of rampage?

Before reading this I did have a quick Google search to get up to speed on what has happened previously, but even without that I don't think it hampered my enjoyment here. The interrogation scene at the start sums up the ending of 'Con of the Dead', while the backstory for Samuel is provided once again, this time by an old lady who lives in the area that the killer grew up in. The artstyle was strange, but I liked it. Panels are quite simple, but the art goes for more of a realistic look, so characters expressions make them easy to read, a pop art look which I thought was decent. Panels on the whole don't have too much background art to them but everything is very clear to follow. I liked that the flashback sequence have a change of artstyle to a far more cartoon look, which helped split it up from the present day parts. The art style was good throughout, displayed best with a few full page spreads of various topics.

There are plenty of gory kills here, and they get inventive, the first time I have seen someone get beaten to death with a cat! Someone else gets a fist punched right through their face, and plenty of people get their heads ripped off, and their intestines spilled. There was a high body count that doesn't spare young children from the Harvester's bloody path. The story here felt like it had most in common with the Halloween franchise, especially with Dr. Johnson who has a bit of Dr. Loomis in him with how he seems both repulsed, and obsessed with Harvester. The killer itself is the strong and silent type, but he has a ghost/demon type child haunting him who spurs him onwards, this helps provide motivation for him that wouldn't be able to exist otherwise. I liked the subtext that maybe the Harvester is a force of nature there to bring balance to a world in which mankind are destroying the planet.

Emulating the slasher films it pays homage to this ends with the possibility of more stories of the Harvester to follow. A simple tale, one that is full of good art, and which has a violent tale. It isn't going to break boundaries of storytelling, but like the slashers it is based on there is enjoyment to be found here. The 90 page third volume in the Rise of the Harvester series is now out to purchase, and can be done so from here, where the other two books can also be purchased.