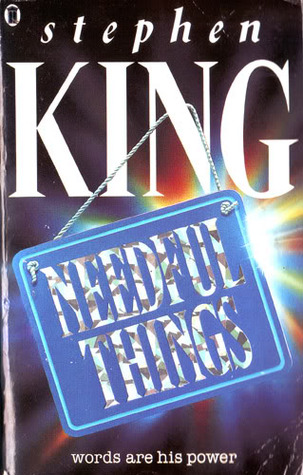 On many occasions over the past few years, usually when reviewing one of the many adaptations of his books I have commented how I am not a huge fan of Stephen King. However this is a position I am more than happy to change if I come across a book of his I really like, and so I have many of his works sat in a queue waiting for their time to be read. Needful Things was one of these, and earlier today I finished reading the nearly 800 page novel. I have memories of skimming through this book back when I was a teenager and my sister happened to be reading it, so it had a little bit of sentimental value returning to read it properly.

A new shop has opened in the sleepy town of Castle Rock, it is called 'Needful Things', and its new in town owner Leland Gaunt promises to sell to each visitor the item which they most desire. All he asks for in return is that they each do a seemingly harmless favour for him. By this process he orchestrates chaos and destruction that will send local sheriff Alan Pangborn to his limits as he tries to stop the madness spreading across Castle Rock.

I have only really ever read a handful of Kings novels but I had heard how he likes to include easter eggs referencing other books he has written. Throughout Needful Things there are many references to an incident involving a crazed dog many years previously which obviously points to his earlier novel Cujo. Then there is the penitentiary 'Shawshank' that gets mentioned every now and again. I'm sure there are many more included here which I didn't notice, but even spotting these ones really added some flavour to the novel. This was an easy to read novel, but did have some bad choices for what was being written about. Things such as Brian Rusk's inappropriate dream about a female teacher at his school for instance, his young age creating moments where I didn't want to picture what King was writing about.

Needful Things has been parodied in many forms of media over the years, and near enough from the start it is obvious there is something not quite normal about the creepy Mr Gaunt. This really goes some places with more of a supernatural angle coming in as the story unwinds. I really loved these supernatural elements, from Mr Gaunt invading the dreams of his customers, to his mind control abilities, and most enjoyable the shift in his appearance and persona whenever he gets annoyed. Gaunt was a fantastic antagonist, mostly due to how he does none of the dirty work, instead he is like a puppet master, remaining in the shadows. Pangborn was a great protagonist also, I really liked his character, and he is one with depth, having his own baggage in the form of the death of his wife and young child in an accident in the past. This is a novel where the inhabitants of Castle Rock are front and centre, it isn't as simple as just following one character, instead the many chapters feature a whole variety of different people, from Alan's girlfriend Polly, to the schoolboy Brian Rusk, and the corrupt town official Danforth Keaton. All these characters have their own problems they are dealing with and the variety meant that something new was always happening. With so many characters though I did struggle to remember just who some of the less front and centre ones where when they pop back up after a lengthy absence.

The novel is split into three parts, with each part being better than the one preceding it. This leads to the biggest problem I had in that part 1 rocks in at around 365 pages, but nothing much happens here. This first chunk is used to introduce the reader to the many characters, and the setting up of Mr Gaunt's plan, but until right near the end of it nothing much happens, and I did find myself a little bit bored. Part 2 is around 250 pages and is where things really pick up and is where I began to find myself getting into the story. Finally, part 3 at around 150 pages is where things get really insane, my favourite bit of the book this brings bloodshed and mayhem to the forefront, as well as features the most supernatural parts, such as a battle against a giant spider for instance. The story was clever in how everything is set up, and by the end chapters are split into small snappy paragraphs. Some characters and their stories felt a little underutilised. Polly for example is relegated to laying in bed doing literally nothing for a huge portion of the second half of the book, only leaving once the plot calls for her essential presence. I had read that King often struggle to write good endings, but I loved how this ended, a great classic showdown between two main characters made for something that was thrilling to read, and so easy to picture in my mind.

For the first third of Needful Things I was in agreement in my existing opinion of King, in that his books just didn't appeal to me. This sedate opening part though was essential in not only setting up the pieces for Gaunt's endgame, but also in introducing the many, many characters to the reader. This book just gets better and better as it goes on, by the end I had all but forgotten the dull opener. Perhaps a little overlong but I enjoyed my time with Needful Things, a well written and enjoyable story.