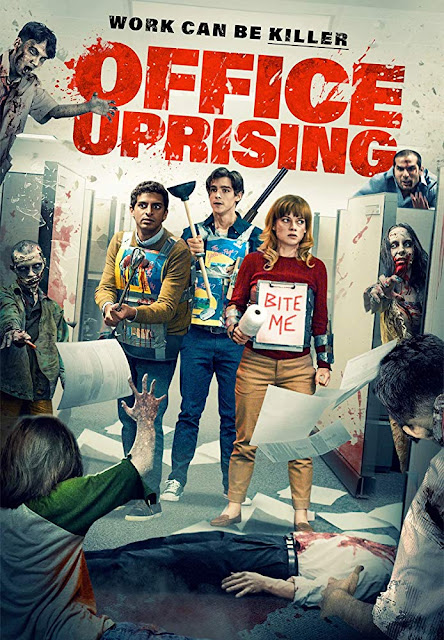 It is currently one of those rare times when I have enough space free in my schedule that I can watch a film of my choosing rather than one I have been sent. A quick scroll through my huge Netflix list and I came across director Lin Oeding's zombie horror comedy Office Uprising. It immediately seemed pretty derivative but would it improve over time?

Desmond (Brenton Thwaites - Titans TV series) is a lazy slacker who works in the accounts department of Ammotech; which is a major weapons manufacturing firm. With an urgent report needed by his boss Adam (Shazam!) Desmond decides to leave work early with the intention of writing it at home. Arriving at work the next day he realises far too late a great change has occurred. After he had left, a shipment of a new energy drink called Zolt had been delivered, and everyone who drank that drink has changed into a rage infected psycho. Teaming up with his co-worker Mourad (Karan Soni - Deadpool 1 & 2) and his half infected friend Samantha (Jane Levy - Evil Dead, Don't Breathe) Desmond must now find a way to escape the office block... 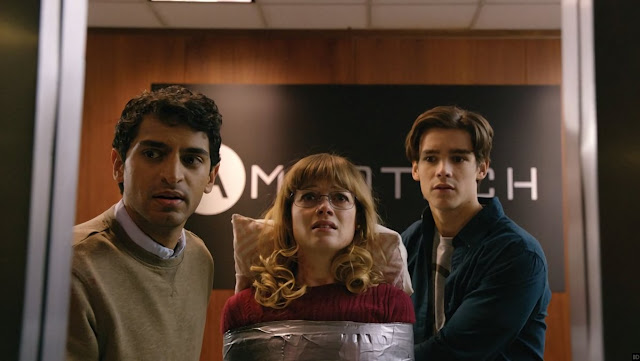 It seems anyone who is going to make a zombie comedy horror nowadays is obliged to copy Shaun of the Dead, and that is on show here from the get-go. Desmond is similar to Shaun in how they are both wasting their lives away by not putting effort into anything they do. Shaun gets drunk and plays hip hop music, Desmond gets stoned and plays live action Mario Kart with his house mates. Also like that film the protagonist is shown initially wandering through chaos without noticing anything is wrong, the whole plot for this character starts because of this borrowed idea. Shaun isn't the only comedy Office Uprising borrows from, much like Zombieland there is even a moment when CGI rules pop up on screen as a character walks around. This lack of new ideas is one way in which this film really suffers. As a whole, boiling it down to its basic components this is Shaun of the Dead crossed with Office Space and The Crazies.

The rage infected victims of the energy drink here are in no way zombies, despite characters referring to them as such (and the very misleading cover that features actual undead). These are not even like the ones from 28 Days Later, instead I was much more reminded of The Crazies, but with more self control from the infected. They may be taken over by rage, but the assailants here are able to talk, work together, and even have moments of clarity. I did like how even though everyone is infected they are still doing their jobs, such as a salesman later on shown screaming into a phone at a client. Make-up effects are minimal, with victims of the energy drink having some veins showing a bit on their necks and lower faces, but that's it. The special effects for the many action scenes are a bit better, there are decapitations, and limbs getting ripped off, and due to the crazies using office stationary as weapons there is lots of opportunities for comic violence, which includes a late appearance of the head antagonist suited up in a robotic suit which resembles an end of game boss. 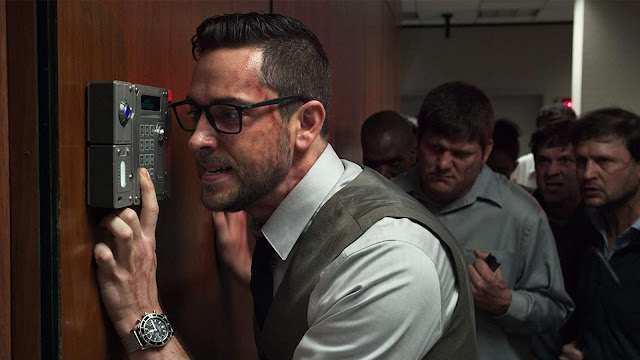 For the comedy, at least it wasn't sex and bodily fluids based, the humour is often ok but never really hit the mark for me. Some parts were kind of amusing, such as pacifist Mourad's apologies everytime he inadvertently hurts anyone he is fighting (such as when infected keep accidentally impaling themselves on the scissors he is holding), and there was a nice dark moment when he kills an uninfected co-worker, thinking the guy had been attacking Desmond. The smattering of uninfected throughout the colleagues led to some not half bad scenes. There was a bit of tonal dissonance with Desmond in particular mowing down a whole load of infected with no remorse at all, though it does make for some entertaining sequences. There is a constant attempt to create humour but there was nothing on show here that made me crack a smile. None of the characters stood out as anything but stereotypes and so I struggled to care whether anyone lived or died.

I expected Office Uprising would be an average film but I did hope at least some of the comedic elements would win through. Unfortunately though there is nothing here to make this stand out as a film worth a watch. It is all done competently enough, but when there are far better films of this type out there this just felt a little bit pointless.

Posted by Daniel Simmonds at 08:41