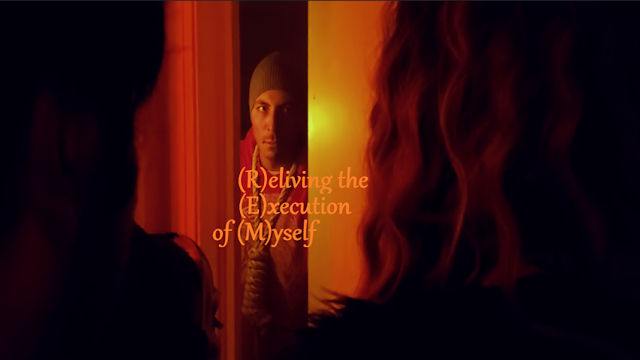 I recently had the pleasure of being the judge for the 'Best Stories' category in this years 15 Second Horror Film Challenge. One of the 15 films I chose for my unranked selection was Armando Jimenz's topical Solar Deity, and now I have received another short film of his for review, (R)eliving the (E)xecution of (M)yself.

A man (Ivan Orozco) awakens from a nightmare to hear a knocking at his apartment door, opening it he finds two people there who are quite angry at him. While that doesn't sound like much for plot this is really something that is more abstract than completely story driven. This manages to be so without feeling arthouse in style. While the short is four and a half minutes in length the film itself ends at the three minute mark, with a long end credit sequence that managed to be nearly the best part of this, due to the on screen image accompanied by the sound of dripping water.

(R)eliving features both strong imagery and sound design. It opens to a corpse on a bed, blood running out of its eyes, I loved the framing of this shot. The rest of the short maintains an oppressive atmosphere, helped along by red and blue tints, and a variety of visual effects that include 24 style screen splitting, blurring, and facial distortion. A lot of the dialogue is also distorted, and I struggled to make out some of what was being said (quite possibly David Lynch style backwards speaking going on). Not being able to understand lines of dialogue just added to the atmosphere for me.

I had no expectations for just what (R)eliving the (E)xecution of (M)yself would be like, but I was pleasantly surprised. It isn't often I will watch a short more than once, but for this one I gave it multiple views, there was an addictive quality to it. The picture quality may not be the sharpest, and it might possibly be a bit of style over substance, yet this was a lovely piece of filmmaking that is worth a watch.