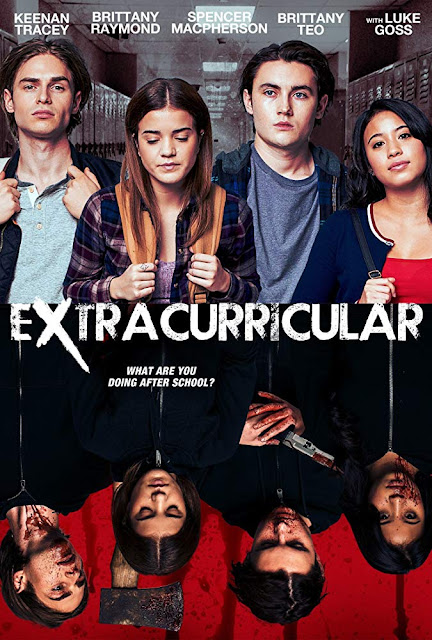 Ray Xue's Extracurricular takes the concept of home invasion horror films and does something a little bit different with it. Rather than following the victims this movie instead follows the intruders themselves. If you stop and really think about what is going on then your suspension of disbelief may fade away, getting immersed in the story however and this becomes quite a thrill ride.

Four high school friends; brothers Derek (Keenan Tracey - Bates Motel TV series) and Ian (Spencer Macpherson - American Gothic TV series), as well as Miriam (Brittany Raymond) and Jenny (Brittany Teo) have a dark secret they hold together. In their spare time they plan and carry out home invasions, picking their victims at random so as to avoid detection. Ian likes to meticulously plan these, while other members of the group prefer far more spontaneous actions, but despite these differences of opinion they work well together, until one fateful night when everything starts to unravel...

Home invasion films are ten a penny, everything from The Strangers, to Them and You're Next but changing the perspective makes this one seem fresh. The problem with having the aggressors as the primary characters is that it doesn't make for ones that the audience will want to root for. Of the four characters here there are not really any that I found as anything other than moody teens, though it was interesting the varying levels of sociopathy each inhabit. Miriam was by far the most interesting, having a perfect family, and getting into a new relationship with a girl from her school. The contrast between this and her murderous side was an interesting dichotomy that never got explored too well. Then Derek comes across like a Scream killer, all anger and flippancy, while his brother Ian takes on a more emo style of thinking. With Ian though there was some nice work done to show that maybe to him his heart isn't really into it as much as his outward attitude might imply. By the time Extracurricular begins the group have already racked up a few kills so there isn't much insight into how they came to decide to do this. Other than an early part set during a lesson in which their teacher, Mr. Vollman (Joshua Joel Bailey) discusses the philosophy of righteous killings as part of a history lesson. I never really came to understand how some of that group could do what they did so utterly guiltless, and so I was hoping they would be caught.

While I was not wanting them to succeed I was still sat on the edge of my seat for the second half, most of which takes place during their latest invasion. This was very thrilling, and I was very invested, despite the gnawing thoughts about all the things I felt the group were doing wrong. With things like Death Note you can almost identify with the killer due to their reasonings, here though not at all. I much preferred this second part to the first. Watching the friends hanging out in their normal life had all a little bit too much in the way of traditional teen angst for me. The second half had traces of a Shakespearean tragedy to it, but really got me thinking what I would have done in that situation. The side plot involves the investigation into all the murders by the local Sheriff, Alan (Luke Goss - The Dead Undead) who just so happens to be the father of Derek and Ian. This relationship might as well not even be there though, as this character is not only woefully underused, but there is only the single short scene in the whole film where he is on screen with his sons. The pitfalls of Extracurricular is that interesting side parts are never explored enough. I would have loved to see more of how these characters act when they are not around each other, such as more of Miriam's new relationship, and a bigger focus on the side plot of the police investigation would also have been nice. Instead there is barely a scene that goes by when at least two of the four are not together talking about murder and invasion. 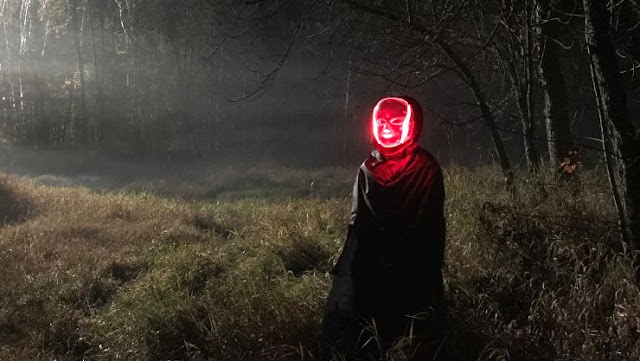 It is all held together by a wonderful soundtrack full of depressed sounding singers, I really enjoyed that aspect, it was a perfect fit for these characters. Also pretty decent were the special effects. These home invasion scenes were well directed and featured some nice moments such as bloody gunshot wounds, and life or death struggles with unexpected outcomes. While there was never a huge amount of blood, there was enough to satisfy. The acting was all good enough, I especially liked the side characters (too small) roles, each one brought a little something to make this film a tiny bit better. Going back to the plot there are a few odd unexplained moments, mostly revolving around Mr. Vollman that irked me slightly, the motivations for characters being in particular places occasionally were left out the story.

I expected Extracurricular to be a typical teen slasher even with the shift in perspective. I wasn't prepared for just how involved I would get into the story, and the second half especially was a particularly enjoyable and thrilling watch. Extracurricular was released in the US on January 17th thanks to Samuel Goldwyn Films, currently it is available in the US only.