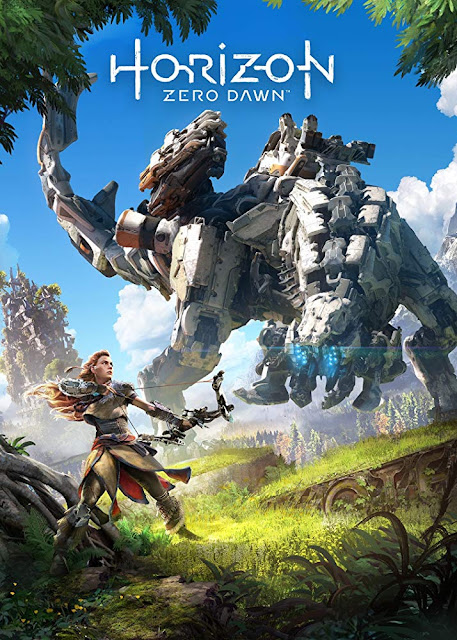 Here at The Rotting Zombie HQ horror is the order of the day. However, I do have a soft spot for anything post apocalyptic and so that is why this prehistoric-techno 3rd person open world adventure game is gracing these pages. Originally released at the start of 2017 Horizon Zero Dawn then got a huge chunk of extra content in the form of The Frozen Wilds expansion released at the end of that same year. I played through the 'Complete Edition' which perhaps unsurprisingly includes both the core game, and that expansion, and this review will reflect that additional content.

Horizon Zero Dawn takes place in a post apocalyptic world in which animal like robots exist in far greater numbers than humans. By that alone you can probably guess what caused the apocalypse, even if it isn't as simple a line as it initially appears to be. In this new world mankind have regressed back to living in tribes, each holding various spiritual beliefs, and many worshipping or fearing ancient surviving technology. You play as Aloy (voiced by Ashly Burch - Borderlands 2, Attack on Titan English dub) who since birth has been mysteriously exiled from her tribe; the Nora, along with her carer Rost (voiced by JB Blanc - Breaking Bad). As a child she discovered a 'Focus' which is an augmented reality device that allows her to interface with past technology. As an adult the once passive machines have become increasingly hostile to human life, and murderous corrupted machines have also started to appear in larger numbers. Because of her special abilities Aloy is sent out into the greater world in order to find out what is causing the machines to become corrupted, along the way discovering just what happened to cause the ancient world to collapse. 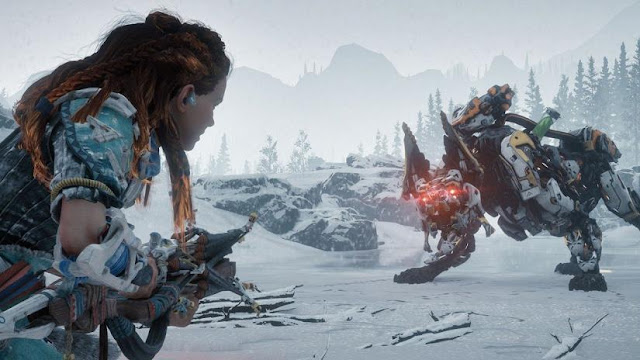 Including the expansion this took me around 65 hours to get through, in this day and age I actually see that as a smaller game than many. It is hard to go into too much detail as so much changes from the start that it would be spoiler upon spoiler. This post apocalyptic landscape is much less Mad Max, and far more Enslaved: Odyssey to the West. The world has returned to nature with most signs of the old world lost to time. Instead you get lots and lots of beautiful nature to explore, and this takes place over a variety of biomes, from the snowy Nora lands that the game starts in, to canyons, forests, and deserts, all the way to the huge mountains of the expansion. Sure it might not initially make sense how these locations are so close to each other, but they make for a game that can often be stunningly pretty. The game world is pretty huge, existing as one large world, rather than a series of smaller open world locations such as with The Witcher 3. There is a ridiculous abundance of fast travel points (campfires here), with many of them even being within eyesight of another one, no complaints here as once you have opened them all up it makes going from mission to mission a great streamlined experience.

Being regressed knowledge-wise the combat of Horizon doesn't involve guns and other modern day weapons, instead you get access to a variety of ones that are both repurposed from machine parts, and techno amalgamations of more basic weapons. The main ones you use are a spear for hand to hand combat, and a bow. The spear can be used to remove machine parts from the enemies you fight (used as currency, to upgrade items, and for ammo), and later you get the ability to use the spear to override enemies, effectively changing their allegiance so that they fight on your side. The bow is more simpler, but you get access to various arrow types, such as flaming arrows, and armoured arrows. Other weapons you get along the way include slingshot grenades, fire and ice shooting tools, as well as ones designed not to damage enemies, but to strip them of their armour making them easier to damage. There are plenty of battles against human enemies along the way, such as the main antagonist's forces The Eclipse, but mainly it is machines you will fight. 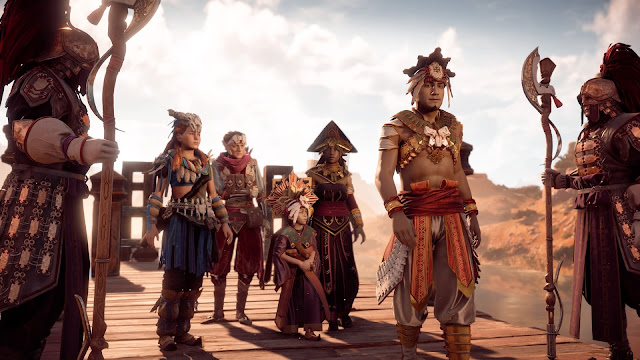 The machine enemies here are all modelled on animals and dinosaurs. The default enemy type are raptor like 'Watchers', there are also ones resembling crocodiles, hawks, bulls, horses and scorpions. All are made up of smaller robotic parts and have a great design to them. Fighting these creatures make for some of the more fun moments here. There are also plenty of boss fights against much more huge machines, ones such as the 'Firejaws' and 'Thunderbirds' become much more intense. There are slight RPG mechanics along the way, as well as getting better armour and weapons you also gain experience points that allows you to expand upon Aloys initial skill set in various ways. Outside of the main storyline there are loads of side quests to complete, these are all detailed in their own ways, from finding missing people, to gathering items and solving tribes issues they were fun to do.

I was most interested in seeing how the ancient world stuff would fit in to the game. Many of the mainline story missions task you with exploring the ruins of the ancient world, and many of those task you with going into research facilities and bunkers which are filled with voice notes, holograms and documents shedding light on what has come before. These were by far the most interesting moments of the game for me, especially towards the end when tonnes of exposition and revelations are discovered during these mostly combat free explorations. I guess one complaint I have is that there are not too many visible signs of the old world outside of the ruins. You get the occasional treat such as rusted satellite dishes, and wind turbines but mostly nature has completely overtaken these, even the 'dungeons' are filled with cave ins, and environments being calcified. Due to the huge amount of story towards the end it became satisfying enough for me. A lot of the notes are a bit dry, but they pick up in interest, and the expansion improves on these as well. 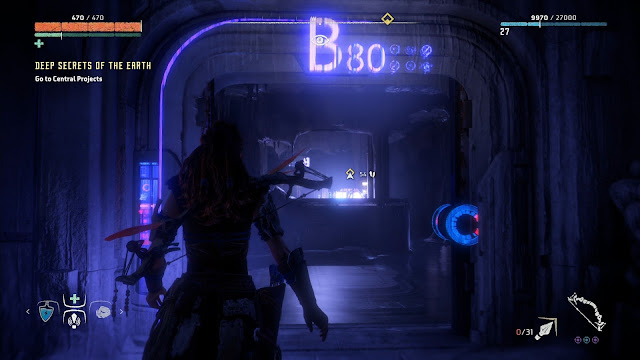 I played Horizon Zero Dawn for around fifty five before taking a long break of several months, and so I returned with my memory of a lot of the game a little fuzzy. I'm sure that can be seen with how I glossed over a lot of this. With fantastic graphics and voice work, wonderful music, sublime (though occasionally frustrating) combat, and a story that becomes decent (decent enough that I shed one single solitary tear at one moment) there is a lot to like about this video game, just don't expect too much horror as it is there, but in very small abundance.

Posted by Daniel Simmonds at 03:29