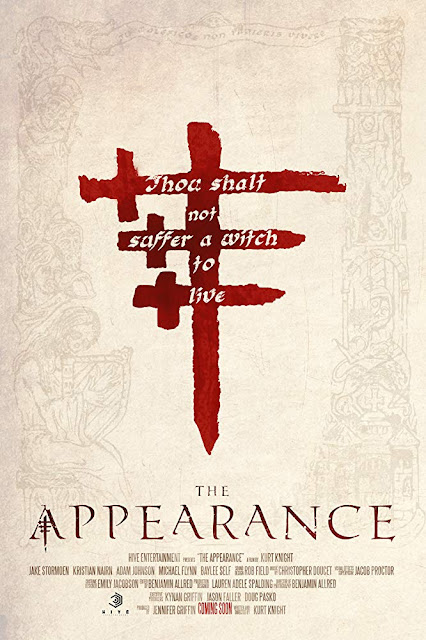 The Appearance is a supernatural horror film that is set during medieval times, it is quite fitting then that this was written and directed by the aptly named Kurt Knight (We All Fall Down). I wasn't expecting too much from this, but actually it wasn't bad at all. It may be a gloomy and miserable affair but it has atmosphere in spades.

Mateho the Inquisitor (Jake Stormoen - the Mythica series of films) and his bodyguard and friend Johnny (Kristian Nairn - Game of Thrones)  have been summoned to a monastery by monk Felix (Adam Johnson - also Mythica) after the unexplainable death of a fellow monk there. There he finds a teenage girl; Isabel (Baylee Self - The Outpost TV series) chained up in the dungeon, with the abbot of the monastery (Michael Flynn - Halloween 4: The Return of Michael Myers) having accused her of witchcraft that led to the death of the monk. Mateho is determined to prove that the girl is innocent, but as more and more inexplicable events happen he begins to question everything he thought he knew. 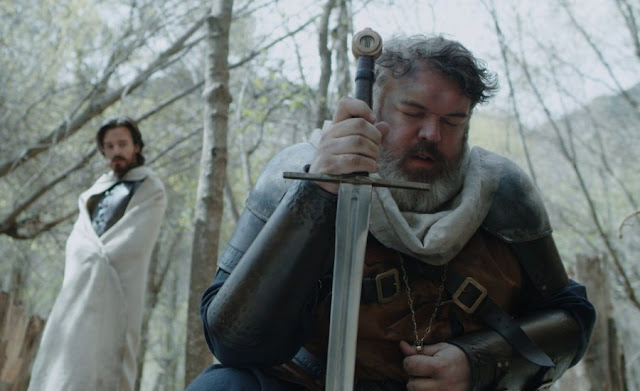 The Appearance is a joyless affair that brought to mind the bleak tone of The VVitch: A New-England Folktale, but as it went on I was more comparing it to the excellent Let Us Prey and even as strange as it sounds Alien. The majority of the movie takes place within the dank corridors of the monastery with some outdoor scenes in the muddy village adding some rustic flavour. The dark atmosphere was very effective, with torch flame being the main illumination, with the occasional sunlight shining through the crucifix shaped windows. The costumes used were all as you would expect, as was the set dressing of straw strewn rooms and religious imagery. This was worth noting as it added to the mood and story of a bunch of miserable monks getting picked off one by one by a demonic force, as did the gloomy music that also fitted the tone well.

Where I had some problems with this film was the protagonist who for an Inquisitor seemed really ill suited to his job. It became almost laughable how out of his way he would go to try and rationalise the spooky happenings as coincidence and explainable despite all evidence to the contrary. This extends to the girl locked up in the cell whose first introduction to him has her creepily grinning, hardly what you would expect of an innocent victim. Mateho is so convinced he is right that he spends a good half of the movie doing a terrible job. Flynn's character Scipio was fantastic on the other hand. He seems maliciously evil and arrogant but as the viewer you start to side with what he is saying. Flynn gives this character so much presence that he near enough steals every scene he is in, a real highlight of The Appearance. There are enough story hooks going on that I was interested to see what would happen. The illusive 'inner sanctum' remains a mystery until the films finale, and of course there was the question of if the girl really was behind all the evil or not, even if to me and most the monks, and all of the townspeople it really did seem she was. Less interesting to me was a side plot about a recurring nightmare Mateho has had all his life. The countless flashbacks back to this nightmare I didn't really care for...until I did. Needless to say his nightmare feeds directly into the main plot in a way that I thought was quite clever, especially when it comes to the religious symbol the man keeps seeing everywhere, and which he is kind of obsessed with. 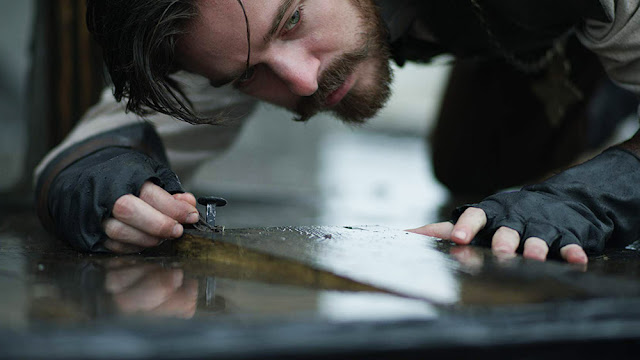 The horror comes in the form of the hallucinations characters witness, from whisperings, to visions of children and monsters this was handled in a way that kept you guessing what was really going on. I liked the weird stop-motion looking way the creature here would move in, and Self has an always creepy way of staring at the camera. For all the expectation of torture and violence you would expect at the dark side of medieval times this is fairly tame with what is actually shown. Mostly characters are killed off screen with other characters catching the after effects. Even when people die on camera it is usually a bloodless affair with it left up to the viewers imagination. Usually bloodless, though there was a nice looking pair of severed eyeballs. There are a few too many embarrassingly bad attempts at jump scares, especially in the first half of this hour and fifty film, but it changes into more of a thriller by the last third. For all the horror here this was a peaceful movie where the characters rarely raise their voices anything above softly spoken words, save for the always far off distant screams announcing a new victim of the evil.

The Appearance was a dark and miserable medieval horror that sustained a feeling of claustrophobic doom and gloom. Thanks to the look of this, and some sterling performances (mostly by Flynn), as well as a story that turned out to be more interesting than it initially seemed I actually liked this one. The Appearance is due out on 20th January thanks to High Fliers Films.

Posted by Daniel Simmonds at 15:20