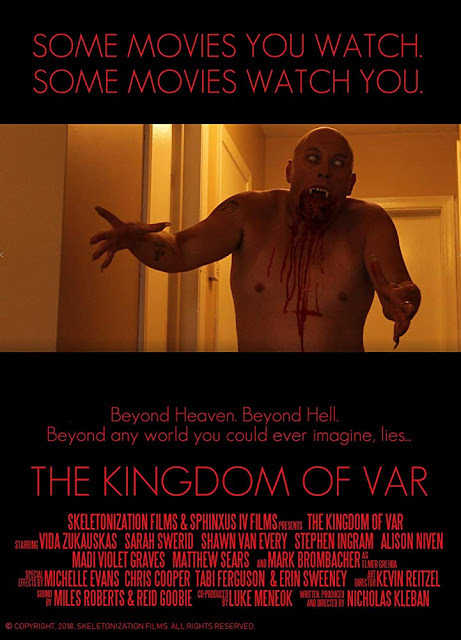 The Kingdom of Var is a low budget indie horror that marks director/writer Nicholas Kleban's feature length directorial debut. Apparently the film was initially planned as a short in a two part anthology, but the second part was combined with the idea in the first to make a longer horror. The whole movie was shot in just thirteen days, with post production taking a year and a half.

Weirdo college student Sonja (Vida Zukauskas - Frankenpimp) discovers a strange video tape in her basement one day titled 1594, which shows a man performing some sort of ritual. Becoming obsessed with the tape she does some research online and discovers that it is allegedly a film from the year 1594 which had been created by a time travelling sorcerer; Var (Shawn Van Every). Her research also indicates that by watching the tape the viewer would summon the spirit of Var who would then relentlessly attack his victim. Sonja dismisses all of this as fantastical, yet as more and more nightmarish things begin to occur around her she starts to think there may be some truth in what she has read... 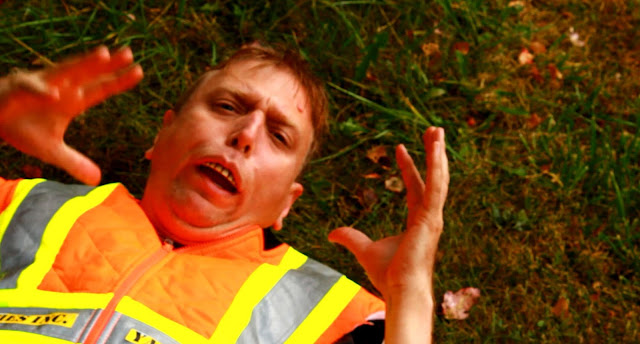 The low budget here means that there isn't much to be scared of. The effects are minimal, the props unrealistic, and the acting ranges from middling to bad. However, rather than try and make a serious horror it seems this low budget look was leant into with moments that are purposely bad and make for some comedic parts, such as when Sonja is being chased and she opens a fridge door which her pursuer runs into and then falls over. This leads to a strange divide between moments that seem like they are trying to be more horrific and moments of absurdist humour, overall despite the bleak direction the story points to this is more of a comedy, albeit quite a dark one.

The characters were all really odd people, including the protagonist who had a meandering way of talking that made it sound like she was reading off a list of random sentences. Because of her weirdness it was hard to be sympathetic to her plight, and she sure does scream long and loudly a lot! Var was another strange character, as an antagonist he never really spoke much, more in the line of laughing randomly and appearing and disappearing. With the film feeling like some kind of out of control fever dream his actions fitted in well with that tone. A lot of the side characters don't do much except grin inanely a lot which often looked quite creepy. The character of Elmer (Mark Brombacher) was the most memorable side character. His fake bad teeth and the sound effects used to simulate his bodily functions had him as a comedic role, though he appears in some of the darkest scenes. 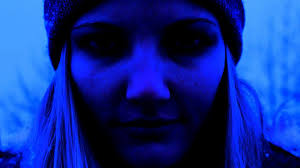 The Kingdom of Var is varied in how it is filmed with some sections that feel art house in style, such as a dream Sonja has of a stretched head imposed over a scene of waves. Other moments include footage that has had the colour inverted, footage with a blue or red tint to it, and even some moments of black and white. With the majority of The Kingdom of Var one long nightmare like chase sequence this variation in style works. There is a lot of horror here even if it is presented in a low-fi way. Topics covered here can be quite dark, outside of the obvious main plot arc there are insinuations of rape and genital mutilation, as well as the whole topic of Sonja having witnessed her parents being eaten by a cannibal as a child (albeit a cannibal whose mugshot has a purposely bad moustache drawn on it, seemingly via Microsoft Paint). With the acting and low production values there isn't a lot of atmosphere to be found, I created the atmosphere for myself in my own mind by thinking about what is explained by characters rather than the visuals creating this picture.

The idea behind the story of The Kingdom of Var is a lot better than its execution. I liked how Sonja's journey escalates throughout the movie, and I liked the ending, but there were a lot of moments that didn't feel satisfactory. Moments such as the importance of latin phrases came across as a bit improvised (even though they weren't) and the videotape which plays such an integral part wasn't that exciting to see. Regardless, The Kingdom of Var was a unique experience that had some neat ideas going for it.

Posted by Daniel Simmonds at 04:13