The Rotting Zombie's Round-up of Horror News for October 2020 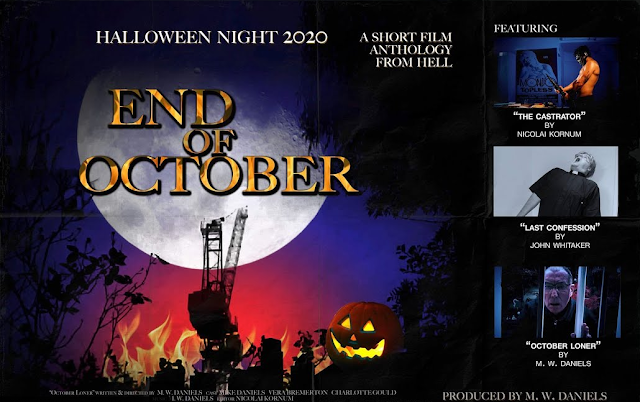 This month I have been trialling the reintroduction of news posts detailing singular news items. This means I am now putting out a new blog post every single day, shall see how long I can keep that going! Despite this my inbox is still full of news items, and so shall be putting a bunch of them into a monthly news post still. Don't take it to mean this compilation of news stories means they don't deserve their own post, more that having a full time day job it means I just don't have the time to write individual posts for each bit of news I receive.

The Dead Ones is now out on DVD/Blu-ray and digital. I said of this school based horror "From start to finish the nightmarish tone remains consistent, thanks to some inventive moments and a great looking set."
Similarly titled My Dead Ones comes to iTunes and Google Play on October 31st. This Brazilian psychological slasher film also came to Vimeo on October 26th.
From Midnight Releasing, Evil Under the Skin is now streaming on VOD platforms, including all the ones you would expect. I said of this "I have to give kudos for where this eventually ended up."

Adrian Tofei's standout Romanian found footage horror Be My Cat: A Film for Anne has been released on DVD in two versions, one featuring the new poster and one with the original poster. Both include 12 minutes of extra footage, closed captions, improved image and sound. This horror was partially improvised and had Tofei method acting for the duration, partially living in character. The creator is currently working on a trilogy which includes this film, We Put the World to Sleep (in post-production) and Dr. Frankenstein (in development). Signed copies of the DVD can be purchased on Tofei's site.

The follow up to supernatural thriller Mayday was announced on September 17th. Tara Reid and Robert LaSardo have been added to the film's roster. The synopsis for this has air marshall Adam Anderson (Michael Pare) on board a flight when a strange smoke engulfs the plane. He awakens to find only him and five passengers remain, and the plane running on autopilot. That sounds very much like the excellent time travel horror The Langoliers, which can only be a good thing. Mayday II is currently on Indiegogo seeking additional funds.

Habitual comes to theatres and VOD on November 13th and has been described as 'A Clockwork Orange meets Saw!' This psychological drug fueled horror is about a group of drug taking ravers who go to an underground rave party called 'Habit' at an abandoned asylum in Salem. The night changes into chaotic hallucinations with characters falling deeper into a metaphorical mind-bending hole. It certainly sounds interesting. This comes from writer/director Johnny Hickey, and allegedly during one screening of the movie an audience member on LSD ended up in a harm reduction center as a result of his experience.
Frolic Pictures have released a special batch of 20 new triple feature DVDs. These are based on the golden age of 'silent screamers and depression-era staples'. The collections features some icons such as Bela Lugosi, Max Schreck, Lon Chaney Jr, Boris Karloff, Tod Slaughter and Soledad Miranda. 'Each DVD is a one-of-a-kind experience, like going to the drive-in back in the day, except in the comfort of your own home. Every carefully curated program is 3-4 hours of shocking, bizarre, and tantalizing entertainment from a bygone era. Packed with cinematic surprises, such as pre-show shorts, trailers, and intermission cartoons'. The list is too much to go into, but some chosen at random include: Face of the Screaming Werewolf/The Wasp Woman/The Bat, King of the Zombies/Revolt of the Zombies/Teenage Zombies, and Curse of the Aztec Mummy/Sound of Horror/The Atomic Man. For more details head here.
From the creator of The Blair Witch Project comes Ithaca: A miniseries of horror. This comes from Eduardo Sanchez and season1 is now available now and can be seen for free on Man In The Arena Films YouTube Channel. The first season is made up of four chapters and is about a man's attempt to heal his broken legacy. It was inspired by Homer's Odyssey, modern mythology and includes Balinese Hindu mythology. It was made over 7 years with no budget, and with a 2 to 4 man crew. Season 1 can be seen here.
Music news now, firstly, Sharone has released a music video for her track Can We Pretend. This is the first single off the dark rock artist's upcoming album, Morbid Illusion that is due out on 28th May 2021. Her second single will be revealed on Halloween (the day this blog post goes out). Sharone says of the single "...is about living a lie, and hiding behind a facade that's destroying you from the inside out".
Sammi Doll has released the official music video for her debut single AN OM IE. This is 'an amalgamation of pounding dance beats and industrial keyboard hooks'. Sammi Doll says of the video "We filmed the video over the course of four months due to quarantine restrictions, so we had the luxury of time to build on our characters. I really gave my blood, insomnia, and tears to everything I do artistically and tend to think about the consequences later...but I knew I was committed when a frozen octopus from Seattle showed up at my front door..."
Finally, a new UK short anthology horror is due to go up on YouTube at 9pm tonight (GMT). End of October features three short films from Nicolai Kornum, John Whitaker, and M.W Daniels. Earlier in the year the three worked on a different short anthology horror, The Isolation Horrors. A review of End of October shall go up next week, it's worth a watch, so check out the premiere at 9pm today (October 31st).
Posted by Daniel Simmonds at 08:47