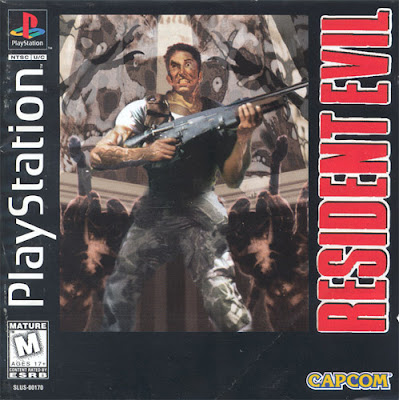 When this game first got announced I didn’t own a console capable of playing it. I remember scrutinising the previews in CVG (Computer and Video Games magazine) thinking it sounded like the best game ever. It is true to say this is the game which I brought a Playstation for.


The games plot concerns a special Police Group called S.T.A.R.S Alpha Team who have headed into the near to search for the missing S.T.A.R.S Bravo Team who in turn had headed to the mountains to investigate a serious of strange murders in the area.
There they discover a big mansion - a big mansion full of secrets…and zombies (and other assorted freaks of nature).
After lots of blood, mayhem, and a few back stabbings a few of the gang escape, and that is the game : ).
The intro to this game is fantastic. It is a live action sequence (with possible real actors!) and involves the Alpha team arriving in the woods of the and being pursued to the by a pack of zombie dogs. 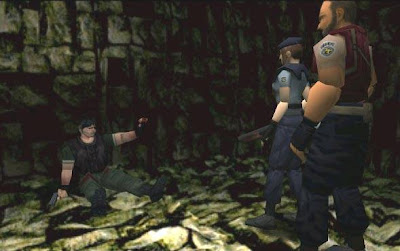 The game is classic survival horror, and one of the first of its kind (well the first good one of its kind). It contains all the classic staples of the survival horror genre – clunky controls, mixture of puzzles and action, fantastic atmospheric music, and plenty of scares.

You ask someone to name a scene in a game where they got scared, and most people will mention the unforgettable ‘Zombie Dogs leaping through the window’ scene, which still makes me jump to this very day.
There are many many zombies in this game. Zombie crows, Dogs, and Humans. All with the one desire – to eat your flesh. You have a variety of weapons to defeat these – everything from knives all the way up to the mighty Rocket Launcher. A personal favourite is the Magnum – one hit is all it takes to blast a zombies head clean off! 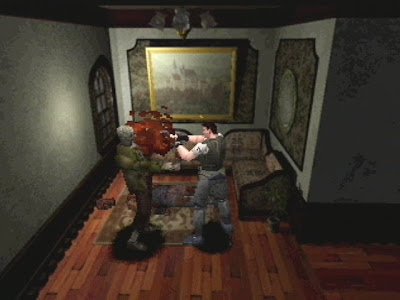 The locations are great. A big Mansion, Gardens, Caves and a Laboratory, suit the zombies well, and give some classic Fulci locations. The moans and groans of the undead are cool, and they look good, even now, the game has aged quite well for an early Playstation game.

Posted by Daniel Simmonds at 07:36