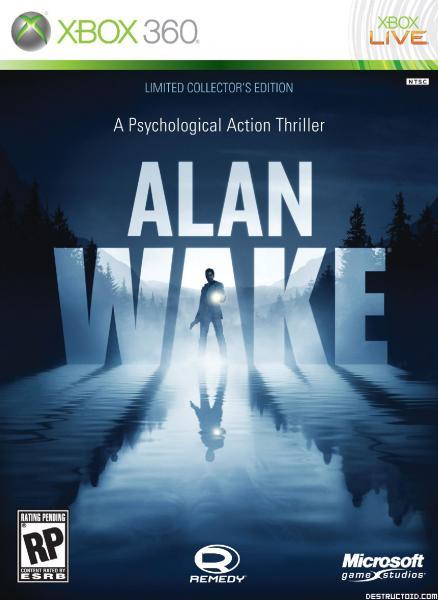 I have wanted Alan Wake for the longest time, finally for my birthday I received it. Alan Wake is a psychological survival horror game set in a remote forest town.

Alan Wake is a famous horror writer who has gone on vacation to the forest town of Bright Falls with his wife Alice. For two years Alan has had crippling writers block and is starting to doubt his ability to write. His wife hopes that the beauty of Bright Falls will inspire Alan to start writing again. After an argument with her Alan leaves the lakeside cabin they are staying at, he has not got far when he hears a scream. Racing back to the cabin he finds it deserted, with the back door open.Thinking he sees his wife submerged under the water in the lake he dives in to rescue her. A week later he awakes in a crashed car up in the mountains with no recollection of the past seven days. He starts to find scattered manuscript pages wherever he goes, a manuscript that he has written but has no memory of, and which foretells the future with horrific results. Every horror written down on the manuscript pages seems to come true. With the Police, as well as a dark evil after him Alan must find a way to rescue his wife and piece together what has happened. 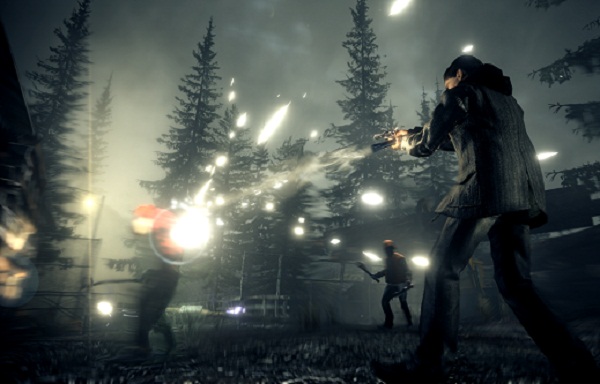 The game reminded me of the dreadful Alone in the Dark (the latest reboot).  Both games rely heavily on light and dark mechanics and both are split up into TV style episodes.  Luckily where AITD was awful this is a great game. The main enemy in the game is 'The Darkness' (not the band, or the comic book anti-hero). The Darkness possesses the towns people turning them into mindless puppets intent on murder. The people (known as the Taken) attack Alan with all manner of tools such as scythes, chainsaws, hammers and clubs appearing out of the darkness of the game world with little warning.  To defeat the enemies they must first be weakened by light.  Alan carries a torch around with him which when focused on enemies draws away their shadow making them susceptible to conventional weapons. Flares, flash bangs and strong lights have the power to totally obliterate the Taken. The other main enemy type are possessed objects that range from small things like barrels all the way to boats and diggers. The game is nearly bloodless, the Taken being made of shadow so dissolve when killed but there is still a sense of dread in the night sections that contrast well with the sections set during the daytime.

The locations in the game are mostly forest based but there is still a lot of variety. Saw mills, farms and plenty of abandoned buildings litter the levels and make the race through the woodlands more interesting. The game is split into six episodes, each usually giving you a location in the far distance to get to. These locations (such as a brightly lit petrol station or power station) often look deceptively close but take forever to get to, giving you a real sense of relief when you do arrive. The episodes vary based on the ever twisting plot, but constant is the darkness making your flights through the woods tense, nervous affairs always heading towards the next lit area while expecting to be ambushed at any point. 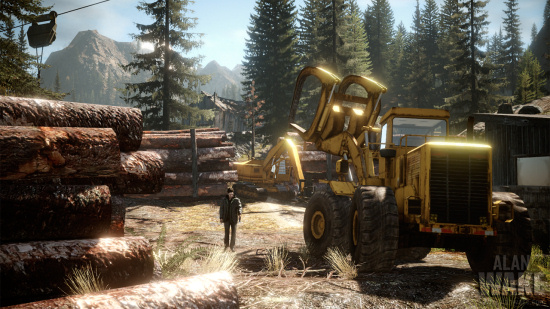 The plot is quite good if not amazing. You have a real desire to see the story to its conclusion and the voice acting is really good, especially the comic relief in the form of Alan's agent - Barry who is hilarious but never seems like he's detracting from the creeping horror. Each episode feels complete and always leaves a cliffhanger for the next episode.  Each one is between one and two hours long, so the game is a decent length.

The game references many things. The town resembles Twin Peaks while the plot as a whole is similar to the John Carpenter horror flick In the Mouth of Madness. Hidden in the game are TV sets that when turned on play short parodies of Twilight Zone episodes that are ace to watch.  The swarms of birds that attack Alan reminded me a lot of Hitchcock's The Birds. 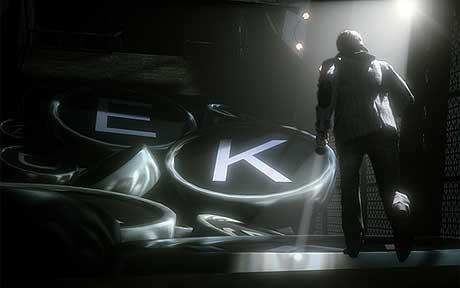 There were two essential DLC episodes released for this game. The first episode is called The Signal.  At first it seems the DLC was just going to reuse locations from the main game but it does cool things with these locations mixing them up and giving them totally different feelings due to the dream like tone of this. Taking place after the end of the main game it gives some more insight into what has happened as Alan is tormented by a crazed version of himself that inhabits TVs dotted around the DLC. The TVs look really good as the Alan on them is live action rather then graphics.

The second episode is called The Writer. This episode sees Alan go even further into his dream world with the locations becoming extremely surreal and crazy (floating rocks over a lake, a random set of locations from the main game all jumbled together and put on a giant spinning big wheel). The combat remains fun and the episode ties up nicely for Alan Wake 2 (please!). 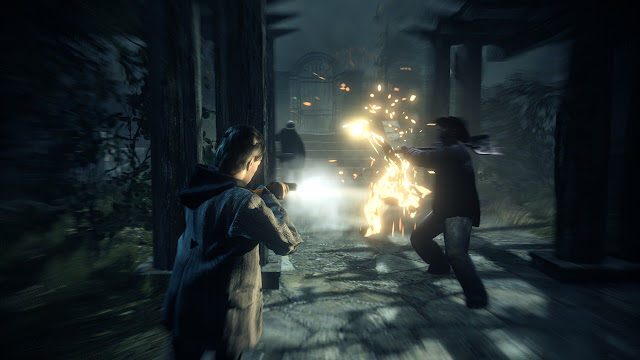 A fantastic horror game made even better by competently and lovingly made DLC. Highly recommended for any fans of horror.

Update (10/09/2020):
I have recently replayed this game in preparation for the second expansion for Control. It is always a worry heading back to a cherished game that you may find it is no longer what it once was. For the first two chapters I was a bit concerned, I found the graphics were not as good as my memory told me, and I wasn't finding the game that interesting. Thankfully from the third chapter onwards this just got better and better, Alan Wake really is a classic game.
The two expansions were also pretty good still. The first, The Signal has a great antagonist in the form of a crazy live action Alan Wake who appears on TV screens, his rantings often bringing an ambush from enemies. This first chapter was quite action heavy. The second expansion, The Writer was more platform oriented, and surprisingly I was reminded a lot of The Evil Within. Both this chapter and that game are set in a nightmare, and both have you forever heading towards a distant lighthouse. All in all I had a lot of fun heading back through the game.
Posted by Daniel Simmonds at 04:52