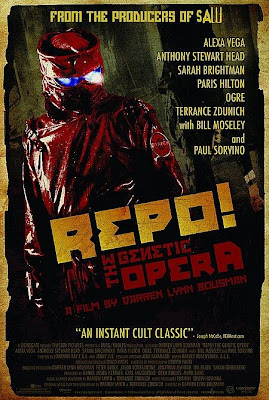 This is a weird film, very strange indeed.  I did not know what to expect from this, but I can say I honestly did not expect an opera.  From beginning to end it was song after song with no break.

Repo! takes place in an apocalyptic future.  A planet wide epidemic of organ failures has led to a dramatically reduced population.  A biotech company called GeneCo rise into power, specialising in organ transplants they quickly become the most powerful business on Earth.  Using their political clout they get a law passed that legalises organ repossessions.  Clients of the company who don't keep up with their repayments on new organs get them repossessed in the most violent and bloody way possible by Repo men.  In this world a sick girl becomes mixed up in the corrupt world of GeneCo whose owner promises her a cure for her disease, but at what cost? 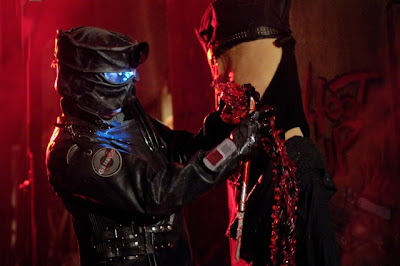 The film has a unique Blade Runner style comic book feel to it.  Interspersed through Repo! are comic book sequences that blend seamlessly with the live action.  These sequences have plenty of captions explaining the goings on of the steam punk world as well as providing background info on the key characters.  The world the film takes place in is a dark, grimy, sleazy place with lots of trash strewn streets, neon lighting and prostitutes, addicts and psychos.

Anthony Stewart Head (of Buffy fame) plays one of the main characters, he is split between being a ruthless Repo Man and a caring father whose daughter is his life, and as such he will do anything to protect her.  He manages this role well, but sometimes comes across as looking a bit too weak for the role of a vicious killer.  His daughter Shila is played by Alexa Vega.  She is well suited to the role, but to be fair her singing ability is not that great, the worst songs in the film usually feature her, in particular an awful rock song in which she tells her father (in song form) that he is too controlling is a low point for the film.  The real highlight actors of Repo! come in the form of the Largo family; rulers of GeneCo that consist of Rotti Largo and his three crazy children that comprise of a freak that wears other peoples faces over his own (Ogre; the singer for Skinny Puppy), a man with a literally murderous temper (Paul Sorvino of Goodfellas fame) and a young woman addicted to face transplants played bizarrely well by Paris Hilton. 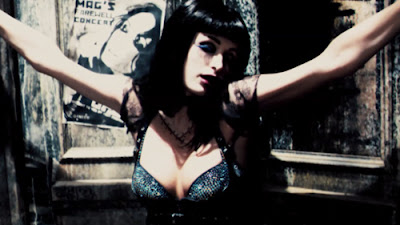 The plot is basically one of revenge and self discovery and progresses well to its bloody conclusion.  One thing Repo! does have going for it is the amount of blood and gore.  Victims are sliced apart (usually mid song) with entrails and other insides pulled out in a glitz of technicolour .  The whole film has the visual style of a  stage with static locations used per song that make things feel fake and like one giant goth/rock music video.  This is due to the fact that the film is actually based on a musical that did the rounds around 2000.

I have found this film quite hard to review; on the one hand some of its songs can be extremely hit and miss but on the other the unique comic book over the top style give the film an appeal that is sure to make it a cult classic.