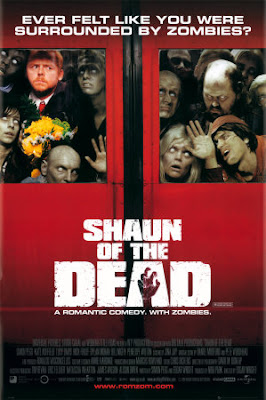 I can't believe I have not reviewed this previously, while I had been into zombie films long, long before this it certainly helped to usher in the resurgence in love for all things zombie. The stars Simon Pegg, and Nick Frost previously were in the hilarious sitcom 'Spaced' from which this film was influenced by the zombie episode (directed by Edgar Wright who also directed this).

Everyone has seen Shaun of the Dead, it concerns a 30 year old loser whose idea of a good night is going to the local pub with his best friend, his girlfriend, and her friends. On the eve of zombie apocalypse Liz his girlfriend dumps him. He vows to sort his life out and win her back which accidentally turns into leading his friends to safety from the zombie threat. Where better place to wait out the invasion than the local pub; The Winchester? 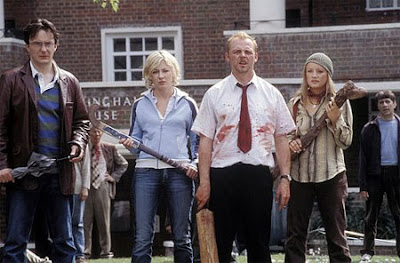 When I first saw this film at the Cinema I really did not think much of it, but it is one of those rare films that just gets better and better with repeated views, much like Hot Fuzz, and Scott Pilgrim VS the World. The jokes are hilarious, repeated catchphrases such as people constantly saying to Shaun (whose red pen leaked) 'You've got red on you' somehow the funniest lines ever. The visual gags are also well done, a late highlight being a fight with a heavily built zombie set to Queen's 'Don't Stop Me Now' song. The dialogue is constantly witty.

It is a bit slow to get going, but that works in that the comparisons between peoples daily lives, and the zombies themselves that is apparent, Shaun is first seen stumbling into his front room groaning like a zombie (in fact he has just woken up and is yawning) and many comparisons are made to the dreary lives people lead and the brain dead zombies. The characters realisation of what is going on is really funny as well, at first thinking zombies are just drunk people. 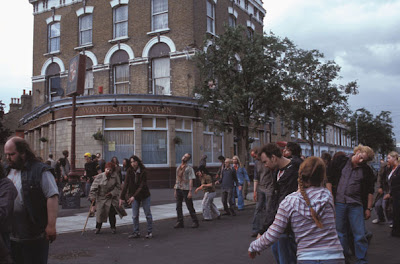 The film gets surprisingly tense and more horror like as it continues. There are a few genuinely affecting moments such as when Shaun is forced to kill his Mum who has turned, and the whole final scene is just pure horror as the survivors are swarmed with impossible odds.

Not a great review, but then everyone has seen this film, if not then you are doing yourself a life disservice and must fix it immediately!

Posted by Daniel Simmonds at 07:14

I don't really like British movies, but this... is one of the funniest movies ever! and one of the best zombie movies too :)