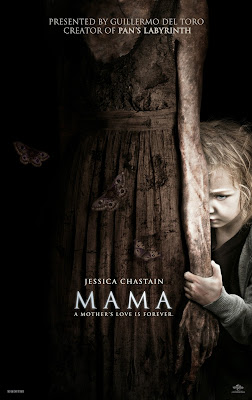 The executive producer on Mama is Guillermo del Toro; him of Pan's Labyrinth and The Devil's Backbone fame (of which he was also producer). His name carries weight with it so I was expecting something deeper than usual horror films.

Mama starts with Jeffrey (Nikolaj Coster-Waldau from Game of Thrones) kidnapping his two young child 1 year old Lilly, and 3 year old Victoria after murdering his ex wife and her work colleague. He drives out into the mountains before a car crash cause him to veer off the road and into a forest. He comes across an abandoned hut where he intends to kill his children and then kill himself but his plan is stopped when a dark force appears and rescues the children. Five years later and Jeffrey's twin brother Lucas efforts to find the children has finally paid off when two rednecks discover the children living wild in the hut. No one can understand how they lasted on their own so long, but it is not long before the children are allowed to go live with Lucas and his 'rock' girlfriend Annabel. Quite soon though a ghostly presence the children call 'Mama' appears, the spirit is non too happy that her children have been taken from her... 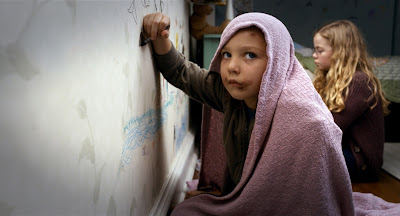 Creepy kid films are always a miss for me in general, thankfully here it isn't totally up to the admittedly unnerving children to bring the scares but also a crazy ghost. Unfortunately most the scares in this film are jump scares, but not even ones that are that well done. Mama relies on the music creating jump scares, it rises up to a point then explodes on you, making you jump sure, but the same way you would jump if some annoying person suddenly shouted in your ear, not because something frightening has actually happened on screen.

The plot is ok in theory but is completely full of holes with sub plots that don't go anywhere. The head psychiatrist early on discovers the ghost but keeps it a secret from the family in hope of gathering material for a book he is writing, then he goes off to the hut in the woods for no real reason at all. Lucas gets a message from the ghost of his brother telling him to go off of the hut in the woods, so he does this also but just kinda wanders around doing nothing until the main plot has need of him, and why everyone feels the need to only go to the hut in the dead of night I do not know. A lot of silliness is involved to keep the film going on, for instance Annabelle has certain proof there is a deadly ghost in the house yet stays there happily, it's not like she can't leave as several times her and the children go various places only to come back later on. 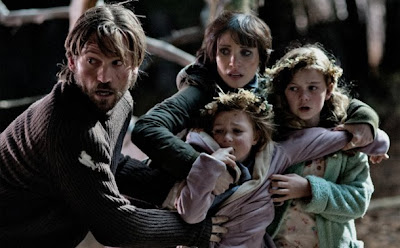 What of the ghost herself? She has a back story that is slowly revealed via files and flashbacks, and she looks creepy enough, as her body was (somehow) left to rot outside it has gone all freaky looking with her limbs stretched, her body contorted at strange angles but when it comes down to it she is mostly CGI that is more notable during the haunting scenes and takes away from the experience. The reoccurring theme of moths is well done and has some good scenes but it is hard to feel anything for this strange creature.

There are some really good scenes in the film, an early one with Lilly playing tug of war with an off screen figure was well done in a Paranormal Activity style way of a fixed lengthy shot as people enter and exit the view. A later scene involving the psychiatrist in the dark having to use the flash of a camera to find out where the ghost was located was cool, and the intro sequence of a series of children's drawings showing what happened in the 5 years between prologue and film proper was a neat idea. 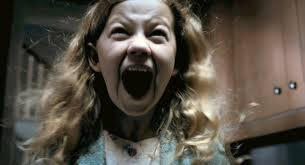 Bad scenes also though, in particular the completely over the top and over long final sequence set atop a cliff just dragged on and on and just made me start to not care at all about what was going on. The younger and more feral of the two sisters Lilly spends most of her screen time doing a creepy grin at the camera and whispering 'Mama' which does wear after a while, and the ending itself was quite unsatisfying.

It does have some good moments, and does work as a horror film but Mama is just let down by a few too many plot holes, characters behaving unrealistically, and an over reliance on music to create jump scares rather than what is happening in the film itself.

Posted by Daniel Simmonds at 08:07

Good review! I share many of the same opinions. Jump scares to me are quite cheap and lose effectiveness after the first viewing. CGI takes a lot out of it too. Some practical effects would have bee welcome!

Thanks :) CGI has certainly improved a lot but still is not at the stage where it is better than real effects