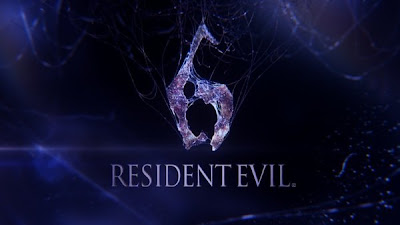 Being a long time fan of the Resident Evil series I wanted 6 despite hearing from many different sources what an unholy mess the game is. It features 4 different story campaigns, and again is designed with co-op play in mind even going into 4 player at very specific points. After my paragraph about the story I shall be doing something different by looking at each campaign in turn.

Leon is in Tall Oaks, America with the president when there is a deadly bio attack on the city which turns the population into mindless zombies. Meanwhile Chris is called back to duty in the BSAA after a terrorist group calling themselves Neo-Umbrella and apparently led by Ada Wong attack a Chinese city with a new bio weapon called the C-Virus. Neo-Umbrellas goal is to unleash the C-Virus upon the entire world. To counter this Sherry Birkin has been tasked with tracking down Weskers son; Jake who holds within him a cure to the C-Virus. 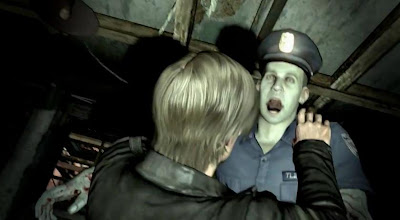 Leon's campaign is designed as an old school survival horror according to Capcom. I would say it works kinda like Resident Evil 4 crossed with Call of Duty. The main enemies are zombies, not intelligent ones, or ones using guns, but plain, cool zombies. They stumble, they sometimes run, sometimes they are armed with basic weapons such as iron pipes and shovels. I was quick to notice how less of a hassle the A.I controlled partner is this time around. They are unable to be killed, no longer steal ammo and herbs, and whenever you are downed they are quite quick to come to your aid, all good stuff!

There are minor, but inoffensive puzzles to solve at times, and generally a more relaxed approach to your horror. Zombies come in heavy numbers, an early sign of this was when an elevator door opened to reveal a horde of zombies swarming in (just like what happened in the CGI trailer for Resident Evil 3!) Quick trigger finger was enough to sort them out but bits like this kept it all feeling fresh. I likened it to Call of Duty earlier, and that is because you are flung from one epic set piece to another without pause. One moment you are under siege in a gun shop, next you are being dragged through an underground river by a giant mutant shark, chasing a zombie dog through a graveyard while corpses burst out the ground all around, crashing a variety of vehicles and generally having a hell of a journey! 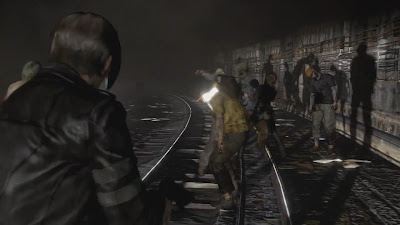 There is no end to the inventiveness on offer here, the best bits though are when you are let loose on the zombie filled streets. Early on you enter a street to find humans running around being attacked left, right and centre, a car crashes into a post right near you, further on a man is trapped under a burning car, being in the scene, just slowly working your way through methodically, makes you feel like such a bad ass. My favourite scene by far came when I was running up a hill to escape this rising zombie gas. I entered a shop and barricaded the door, thinking I was safe...then a zombie smashed open the shop window and the gas entered leading to a very frantic, and unexpected retreat up the staircase of the shop, so neat!

It took me a while to get into it but I really ended up enjoying Leon's campaign, very silly, but also very fun and exciting. 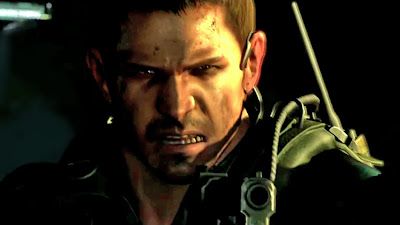 It is sometime later now and I have just completed Chris's story. The reviews all stated that Chris and Jake's missions were terrible, true it did use up some of the good will I had stored but despite it's issues it was still fun. Nearly all the enemies you face are zombie types who are armed with guns, the game is pretty much a third person shooter for the most part, a cover based one at that. It got kinda frustrating in parts due to the sheer amount of soldiers gunning for you, nothing more irritating than getting knocked over by a shot from a zombie sniper several blocks away.

Levels are much more open than before, the open sections are the worst. Some big stand-out moments also appear here though. A fantastic sequence saw you and your squad pursuing a giant invisible snake through an old building. As you progressed your squad got picked off one by one, true survival horror there! To split up the endless shooting there are a few vehicles sections, neither of which are that great. The bosses are quite cool though, and despite some frustration the end of game bad guy was as epic as the one Leon faced. 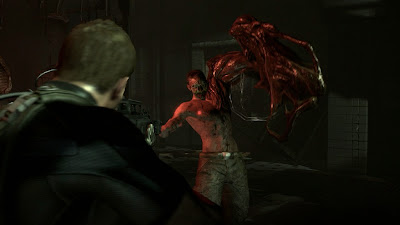 If the whole game had been like this I would not have been pleased, but with 6 hours of traditional zombie fighting to then have around 8 hours of third person shooting was not bad even if it went far too non horror at times (battling helicopters, really?). I was pleased to see there were hardly any identical locations used, even if the ones here were quite bland (all grey corridors, not much to look at). It was also cool to see how the separate stories tie in together.

One thing I have to mention is the at times frustrating lack of ammo, many occasions I was facing ridiculous odds armed only with my combat knife, desperately breaking open random crates for spare ammo. 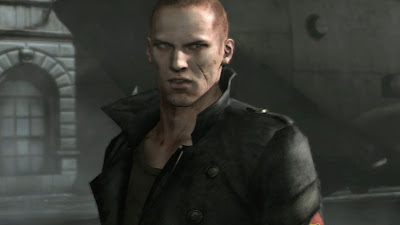 This was another of the four campaigns which was supposed to not be very good. I found Jake to be a very interesting and cool character having been 'bad' for most of his life working as a gun for hire. He even starts the game working for the bad guys but due to being immune to the C-Virus his fellow soldiers turn on him after mutating.  This is the shortest of the missions so far, several of the 5 chapters coming in at around 45 minutes. Again hardly any of the same locations are used, some trekking through a blizzard, escaping a research facility and a fun bike chase occur, so more random crazy moments.

Like Chris the game turns into a third person shooter for the most part, enemies all armed with weapons, and for a lot of it they don't even mutate when defeated. Jake also has access to some melee special moves including a cool lock on where he charges across a level to an enemy. Taking cues from Resident Evil 2's Mr X, and Resident Evil 3's Nemesis there is an invincible monster who turns up at random places to chase you, a hulking cyborg that is fun to fight, not very scary though as he only appears at pre-set places. For the third game in a row now a enemy armed with a chainsaw is introduced which was really quite a weak boss, though again a lot of fun to fight. 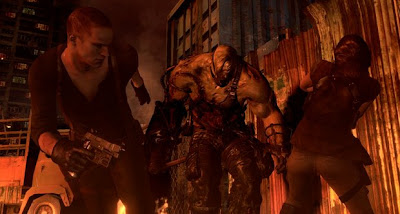 Not much bad to say about Jake's levels. I had fun, and would say I preferred it to Chris's as I was not constantly running out of ammo like I was there. 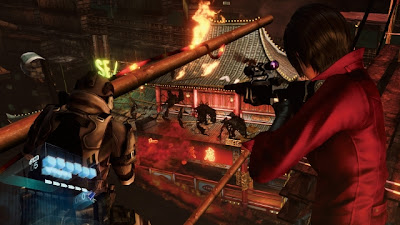 Up to this point the story really was not making a lot of sense, I was hoping that Ada's section would clear up some of the confusion as to what the heck was going on, it kinda did, maybe. Ada's missions are the shortest of the bunch with the last level coming in at just over half an hour. Her missions are a combination of stealth and traditional zombie battling and while there are a lot of original sections she also has the biggest cross over of other characters segments.

Not a bad series of missions though I can see why it was originally a hidden extra once the other modes were done, it's boss fights are really quite easy, one I defeated in around 10 seconds, while another is hinted at but then aborted as a joke to the player I believe. The crossbow is a fantastic weapon though, and Ada is the only character who gets to use it. 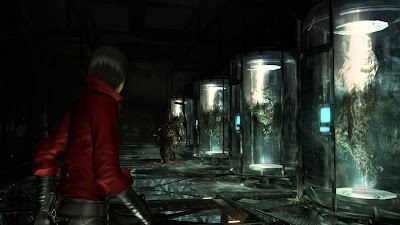 Now this game got a lot of flak when it was released, pretty much everyone turned against it saying it was overlong, a mess of different genres, and just lost. I was all too ready to join the band waggon but then I played it...I love this game! Seriously had so much fun playing it. Sure jamming in driving sections was a weird move but they are still fun even if quite basic. There are plenty of normal zombies to fight and zombies with guns is sadly expected in a Resident Evil game nowadays.

Hidden in each level are 4 files which give background to the game. Unlike previous games these files are actually really quite interesting and bizarrely for a hidden object actually give plot that is not explained very well at all in the game! If anything brings me back to Resident Evil 6 it will be tracking down the missing files I could not find, that and trying co-op to see if that is better than the confusing mess that was Resident Evil 5. There are a host of multiplayer modes stuck onto the game after release. I tried one of these where I entered someones game as a zombie, had some fun with that though the poor zombies really do move painfully slow! 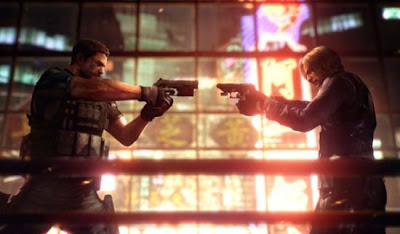 I am at peace with the fact that the Resident Evil I fell in love with has died, but overall it may lack polish but I actually found this game to be a lot more fun than the previous one. It is at times frustrating, bland, and badly designed but it cannot be accused of being samey, there is so much variety split through the 20 hours plus play time that you really can't complain.