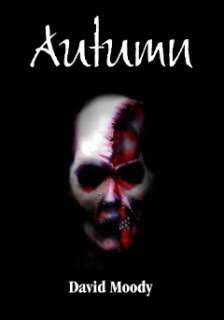 One of the first posts I ever wrote for The Rotting Zombie back in 2008 was a review of Autumn by David Moody. That post has since been deleted as it was terribly written as was most of my stuff back then. I still have a review of the 2nd book in the series live but that shall be deleted and replaced soon! David Moody is my all time favourite zombie author, his books are so good.

Some sort of deadly virus sweeps the Globe, within a day billions are dead, only a handful of survivors survive, somehow immune to the infection. Autumn takes place in Britain where a group of traumatised people gather in an old community centre in Northwich. These include family man Carl, pragmatic Michael, and Emma; a student. No one is really coping with the sudden death of the world, everyone content to wallow in grief and argue amongst themselves. Michael sees the need to leave the Town and get out to the country, the dead will cause mass disease. As if this was not all bad enough the bodies of the stricken start to rise, at first blindly stumbling around operating on instinct the corpses begin to change, to get more intelligent and to seek out any remaining humans.

Chapter 23, page 134 is when Autumn goes from being ok to amazing. It is at that point that the cadavers start to react to the humans, to start to follow them and begin to get angry. Now I understand the need to slowly have this happen, with Moody's zombies they are of a totally different type than the norm. These do not seek out life to feed on them, they seek out life as it is an anomaly in an otherwise dead world, they want to be close to life, to hold it. Not so bad when it is just a few but as the book progresses more and more zombies appear, drawn by the only noise for miles around. They are pitiful, weak, emaciated, frail yet unnerving in their behaviour, forever changing. While they have no ability to bypass obstacles they form mobs, fists smashing down on whatever is in their way.

I feel quite stupid for saying this but it was only on my fourth read through of the Autumn series that I realised it takes place in England and not America! So used to zombie stories being in the USA that my mind just assumed and ignored any blatant references (such as colloquial language used and the emergency number being referred to as 999 for instance). The characters of Michael, Carl and Emma are irritating for the most part. Carl in particular is so caught up in his grief for his dead family that he is a millstone around the other two peoples neck. Michael and Emma steadily get better as Autumn progresses, turning into likable heroes by the end. Though the survivors for the most part are annoying in their wallowing it actually does make a lot of sense, far too often characters in zombie books adjust remarkably well to the changing landscape. The way some chapters are told in first person from the viewpoints of the various characters is a good idea and helps give you some more insight into their thoughts and motivations

For all my putting it down Autumn is still a good, solid book and a great introduction to the Autumn series. From halfway through I just could not put it down, exciting to read. As I said the slow intro is needed to fully show the type of zombies this world has, later books are far more gripping from the go.