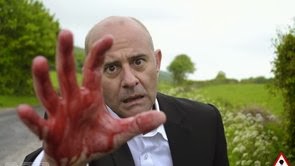 Black Spot is the new horror short from the director of Creak; Luther Bhogal-Jones. It was intended as a test of a new (badly rated) 3D camera he had received for Christmas. As the film was shot in 3D, and intended to be seen in 3D I don't feel comfortable actually reviewing it as I was only able to see the 2D version.

Black Spot stars Raine McCormack as Paul; a man whose car breaks down in a notorious accident black spot out in the middle of nowhere in the English countryside. Heading off on foot to find assistance he instead finds another car, also broken down and then the madness begins...

At six minutes long this is a condensed horror, even more so when the last minute of the piece is the end credit sequence. This is really well done, bits of story inter cutting with the credits which are shown via various road signs, really clever even if the signs do all look like they are made out of cardboard. The film was made on a very small budget, the camera itself used to film cost just £28, while local actors were used to keep costs down.

It brings to mind elements of The Texas Chainsaw Massacre and in general it's feel is very of that time - the 70's with neutral clothing used, and only really the fact that the cars shown are modern to show it is modern times it is set in. Black Spot went to a familiar place I have often seen before, but was also unexpected as the muted opening led me to believe this would be a journey of the mind. Dialogue is at an extreme minimum, it was good to see Paul is not chatting to himself on his own as characters often do for exposition. Flashbacks reveal that Paul is not exactly a saint but silence during this sequence stops us the viewer from being spoon fed an opinion of if he is a good or bad person.

All in all Black Spot was an enjoyable 6 minutes that show just how versed Bhogal-Jones is in creating captivating short stories, especially considering the innumerable problems he faced creating this.. You can check out the horror short here where you can choose between seeing the 2D version, or two different versions of the 3D one.
Posted by Daniel Simmonds at 07:09