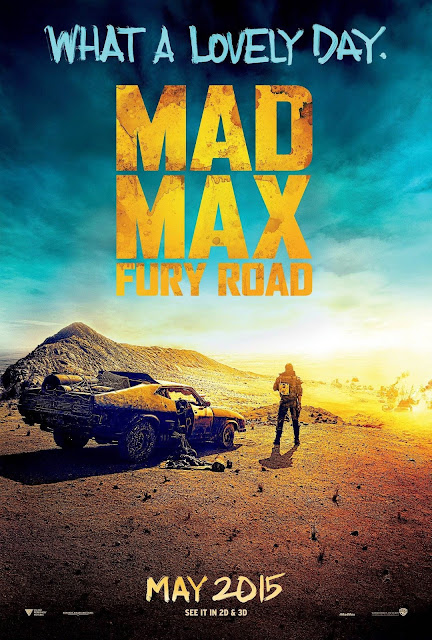 I went to the cinema not expecting at all that I would be faced with the dilemma of whether I should review Mad Max: Fury Road, sure it is post apocalyptic but it is not horror, I finally came to the decision that I really should give it a review though in case I regretted it later.

Tom Hardy stars as the titular Mad Max, this film has been classed as a reboot of the franchise but as far as I'm concerned it could easily fit into the time line of those ones. Set in post apocalyptic Australia it starts with Max being hunted down and captured by a band of marauders who follow the local warlord Immortan Joe. This soon takes back seat to the story of one of Joe's commanders; Imperator Furiosa (Charlize Theron) who during a routine mission to head to Gas Town to get petrol turns traitor and heads off into the desert having secretly stowed away Joe's 'wives' in her war rig and planning to take them away to safety. Soon Joe's entire mobile army is in pursuit which just so happens to include Max (now tied to the front of one of the chasing vehicles). After a series of events Max ends up also on the rig with the wives and Furiosa, but can they get to their destination with a whole army at their heels? 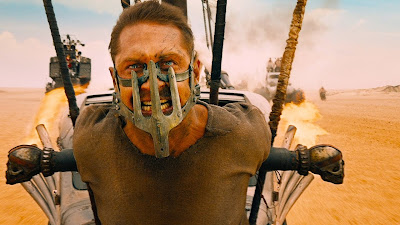 Now I have only seen the first two Mad Max films and only once many many years ago and so I can't quite recall the tone of them other than they were really violent. While Fury Road is a 15 there is still plenty of violence though when it comes to blood that is in very short supply with the main consequence being an attacker falling off their vehicle/vehicle exploding. I say vehicle as this is very much a two hour chase sequence, all the fighting, shooting and plot development happens while on the move with probably fifteen minutes in total that doesn't involve being in a moving vehicle.

There is far more of a fantasy vibe this time around. Locations are outlandish and over the top, while the clothes and car design is almost surreal. Joe for instance wears a perplex plastic suit of armour, while his fortress has been built into the side of a mountain and is very dramatic looking. Mad Max actually lives up to his title, before it seemed 'mad' meant he was angry but now the character has frequent visual and audio hallucinations of his wife and child (who as is lore were murdered in the past). He is very much the strong silent type and quite an anti hero, at least to begin with as the pre film blurb says his only desire is to survive. 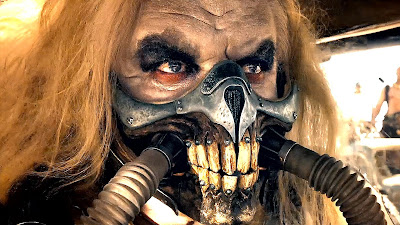 For a long chase there needed to be variety and this mostly comes from the different gangs who pit themselves against the huge rig. The vehicles are all very distinctive, Joe's one being a monster truck while others include a converted digger, tank, and various motorbikes, jeeps and vans. Early on a gang riding around in spiked cars that resemble hedgehogs appear, later there are crazy contraptions with many different car types all welded together to create things real bizarre to see. With all these things it was disappointing to see the iconic Mad Max car featured little, I don't know what it is with reboots wanting to exorcise cult things from them (such as A-Team not having the awesome van) but the few glimpses of the car just makes me wish Max actually got to use it for more than a literal half a minute.

The plot for Fury Road is very bare bones, to expect less in an action film of this type would be hoping for too much, but all you really need is a motivation and the action does the rest. The key characters do get some depth to them, in particular the mysterious Furiosa who slowly reveals her motivations for her betrayal, and rogue 'war boy' Nux (wonderfully played by Nicholas Holt) whose transition from brain washed cultist to a more fleshed out person is believable. Otherwise though there is not much to anyone. Max has zero character development and as a result this feels like a side story to one of his other films, this is very much Furiosa's tale, he just happens to be in the right place at the right time. On the enemy side the hundreds of kamikaze pursuers show no regard for their safety and have a hive mentality, it is a harsh apocalyptic world they live in where life is cheap after all. The leaders of the bad guys also have no development, they are pursuing because something has been stolen, there is no attempt to make them more realistic. 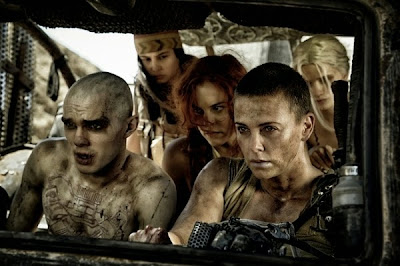 There are few female characters in Fury Road and I don't really like the way they get portrayed. Furiosa aside the rest of the female cast give the impression of contempt for the males, All the males are shown as completely crazed with the only real voice of reason belong to the women. Luckily as said Furiosa is a much more pragmatic character, less said about the awful Australian plucky stereotypes who show up later the better.

This film looks fantastic, there can be no complaint at all about the art direction, this is a beautiful and surreal world of deserts, salt plains and canyons with a kind of insane ballet to the way the action plays out. Men on poles attached to the top of vehicles, exploding spears and dancing flames all are just wonderful to witness. A particular highlight is the constant sight of a vehicle that has a bunch of men playing drums on the back, the front full of speakers with a man playing electric guitar, all seeming so bizarre but fit so well in the mad image. The way these drums and guitar actually feed into the actual soundtrack for the chase scenes is expertly done. 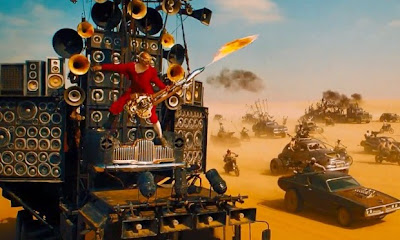 With no real let up in action I did find myself feeling tired at the spectacle at times, it is just relentless action for the entire running time so would have preferred the occasional quiet moment to recharge my action batteries, being a 15 there is nothing over the top though guns, blades and even a chainsaw pop up at one point or the other but certainly far more clean than the old films.

Fury Road could have been terrible, but with such a beautiful artful film and such well directed set pieces from George Miller this actually turned out not to be bad at all. For me the constant action did end up draining me but look past that and there is plenty to enjoy here despite the lack of any development for Max himself.

Posted by Daniel Simmonds at 07:56