Back in 2013 at the UK Festival of Zombie Culture I caught the last half hour of The Battery and thought what I had seen was fantastic. It is only now that I have seen the whole thing. I was worried that the rest might not live up to the powerful final third, but was there any reason to be nervous?

The film takes place in New England and follows Ben (Jeremy Gardner) and Mickey (Adam Cronheim); two former baseball team mates who now live a nomadic life style after zombie apocalypse has swept the country. Ben relishes the new world, he is in his element savaging for supplies and living off the land, Mickey however is stuck in the past, not able to forget the world that used to exist and just wanting to find somewhere safe to live in comfort. After discovering other survivors via a radio transmission Mickey becomes obsessed with finding them, even their ominous warnings to stay away is not enough to stop him from his new found goal. 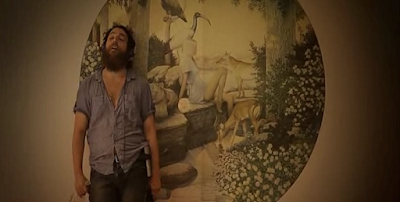 The Battery has a very laid back feeling to it, there are plenty of long, lingering, lazy shots that goes perfectly with the summer vibe. The duo are aimless, they have no goal so there is no sense of urgency for them, they soak up their surroundings and so this slow approach to filming works well. Some reviews I noticed complained about these slow shots and wished the film had been cut down but I disagree, especially later with a protracted scene in a car these long single shots help make things seem real, much more than multiple kinetic camera angles would have done.

This laid back approach is also echoed in the amazing soundtrack which is full of stripped back light hearted songs. Music plays a key role in the film, Mickey uses his headphones as a means to escape the dead world he has come to know, his music is like a security blanket to him, the fact that Ben puts up with this is a great unspoken sign of the trust the two have in each other as it is up to Ben to protect him from threats his music might drown out. The best part of the film in fact comes courtesy of music, a little number that was laugh out loud funny.

There is very little plot to speak of here but that is in no way a bad thing as instead lots of time is dedicated to showing just how well Ben and Mickey work together. They have a shared past of being trapped in a house for three months, which gives the reason Ben wishes to be always on the move but also suggests that they must be close if they survived that without getting sick of each other. Ben is nearly the polar opposite in the way he behaves, he is the one who provides all the food and kills the zombies. Mickey in fact starts the film having never killed one and with no desire to and that is a bone of contention between them. Montages of the two hanging out pop up throughout the film and really provide a sense of comradely that no amount of dialogue could provide. In fact over half the film is just the two hanging out doing normal things, it makes the times when danger rears its head all the more impactful. Gardner and Cronheim are perfect fits for their roles, their performances are so realistic and believable and really adds to the films tone.

The Battery is filmed in some beautiful locations; countryside, old houses, rivers and long stretching roads, along with the summer vibe and twee music you can often forget a zombie apocalypse is even going on. The cast is very minimal and that isn't just limited to the human characters, the undead are a constant threat but in such small numbers that they are never really something to be afraid of. The make up for the ghouls is passable but they are not really the point of this road trip/buddy movie. There is quite an omnipresent feeling of bitter sweetness throughout the film, seeing these men go about their lives with the weight of what they have lost behind them made me just want them to find happiness, everything they do has a sense of sadness and wistfulness, despite this there is plenty of gentle humour throughout with some very funny natural scenes at times.

Jeremy Gardner not only stars but he also wrote and directed this, while both him and Cronheim produced it and you can tell it is a real labour of love, despite having around a $6,000 budget this works with what it has and leaves a film that really stays with you. What you get here is a film about two believable characters, both flawed people, but also people you just can't help but root for. This has gone straight into my top ten zombie films of all time; essential viewing.

Posted by Daniel Simmonds at 08:35