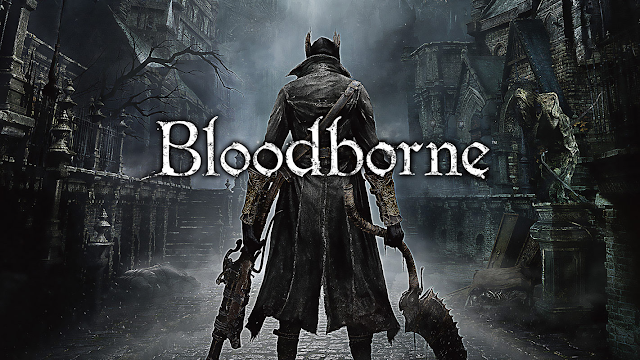 I love Demons Souls, I love what I played of Dark Souls but I have to confess I am ill suited to playing those sort of games as they are very hard and unforgiving. When I discovered there was to be a new game in the genre of tough as nails explore-o-thons and that it was going to be horror based rather than fantasy I just knew I had to play it and so was one of the rare games I actually went out and brought new.

Now the story is very obtuse and so I don't think for a moment I will be able to accurately explain the gist. You start the game getting a demonic blood transfusion which gives you the ability to fight monsters as a Hunter. After passing out you awaken in a deserted medical centre in the Gothic city of Yharnam, it seems the majority of the residents of this city have mutated into hideous monsters, the non affected have all hidden away indoors while Hunters such as yourself stalk the streets to battle these creatures with it being indicated that when dawn comes the monsters will vanish. 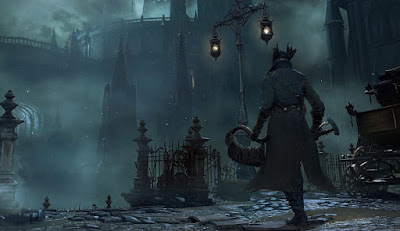 Despite owning a few of these types of games Bloodborne is the first one I have actually completed, I kinda feel proud of that fact as I'm not the best to be brutally honest. Think of the Metroidvania style of game where you are in one huge level where you explore to find new items and unlock new pathways. Now instead of 2D change that into a third person game. As you work your way through the city you find lanterns which when lit give you the ability to travel to the Hunter's Dream where you can use blood echoes (basically experience points) to level up as well as buy supplies and quick travel to any lantern you have unlocked.

In the Souls games you are meant to walk around with a weapon and a shield, fighting seems quite slow paced but not so here. The best way to fight is by attacking constantly, your character is fast and can dive around and quick step like a loon, and there is one ingenious way the game forces you to keep attacking. If you take damage you have a small window in which you are able to regain lost health by hitting an enemy, this leads to intense periods of battling before quick stepping out the way to have a breather. Usually I am Captain Cautious so the fact that I changed my usual tactics shows this way works. Also unlike the Souls games you have access to a gun, this is purposefully underpowered though and is just meant to be used to stun enemies. 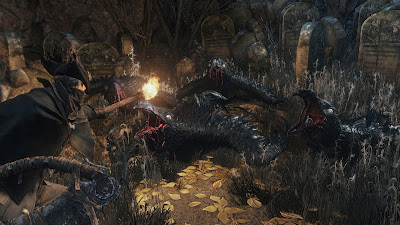 Bloodborne is not a game where you can charge around though, there is danger around every literal corner and it does not take long for you to be dispatched (to respawn at the last lantern you used) so I would find myself ever so slowly inching through the levels, heart pounding at the knowledge that at any moment I could find myself dead and my precious blood echoes lost. As with the Souls games should you die all your experience is lost, make it back to where you met your end and you get a chance to collect it, but in a cruel twist of fate you are now more than likely going to discover a enemy is holding onto it.

With it's Gothic setting this is very much a horror game, with cathedrals, castles, grave yards and an exaggerated Victorian London vibe there is nothing safe and sound here. From cobbled streets to swamps and nightmare planes of barren rock the variety took me by surprise. The monsters you face are for the most part fantastically designed; huge rats in the sewers, towns folk roving in gangs armed with all manner of sharp implements, werewolves, witches, reapers and hat wearing giants among a huge throng of others, there is a crazy amount of unique enemy types that all the way up to the games finish were surprising me in their scope. The bosses on the other hand are not always the best to look at, many of them are huge multi limbed monstrosities that fill up the screen and thematically go together well but are just such a mess of different parts that they don't really look like anything. I actually found the humanoid looking bosses to be far more fun to fight. As with the normal enemies though there are a huge amount of these, including plenty of optional ones and even a few secret ones. 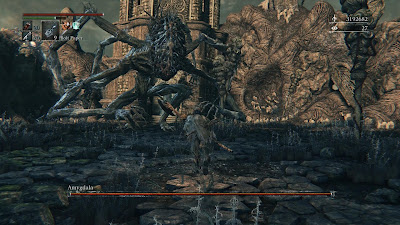 The ambiguous storyline was really interesting, a lot of the back story is told in item descriptions while a lot of the time you just try and work it out yourself. A university lost in a nightmare, a exiled old hag living out in the woods all, combine to make Yharnam seem real, the design is top notch and the game looks fantastic. The soundtrack is also top tier and I will definitely be purchasing that.

Aside from the game proper there are also Chalice Dungeons, these are randomly generated dungeons that you can battle through for unique items and in a nice touch actually feature quite a lot of bosses and monsters that are not in the main game proper. The design is not the best for these and certainly feel different in tone to the rest but I found them fun to do in small chunks and they really help in getting blood echoes. Another part of the game is the ability to summon other players to team up with them, I tried this once, it didn't work as it is a science to actually find someone. Enemy players are also able to invade your game, thankfully this only happened once. Like the Souls games you can look at signs on the floor of the game world which when accessed show a ghost of a player dying, and there are also notes left everywhere by other players to provide clues and help. 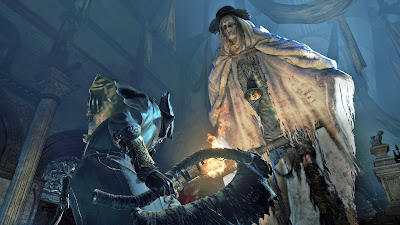 I wanted to love this game and judging by my heap of praise I indeed did love this game. It is not perfect, the quick travel system could have been more streamlined, while occasionally it can get so hard that it feels like you are treading water. Initially it had ridiculous load times but a patch has fixed that issue and so towards the end of my 35 hour playthrough this was no longer an issue. Bloodborne is the first essential game of this generation.