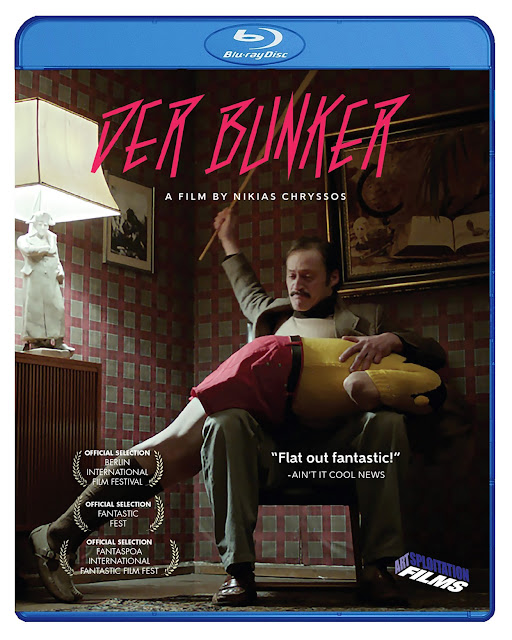 Der Bunker is a very strange award winning German black comedy that takes place entirely in a small bunker with a cast of just four people, directed by Nikias Chryssos. I didn't really know what to class this as, as it certainly isn't horror, but it has a sense of unease and peril throughout that contrasts with the ridiculous nature of the piece.

Pit Bukowski stars as Student who has travelled to a remote house built inside a bunker deep in a forest. He hopes for peace and quiet so he can work on a groundbreaking new scientific formula but soon finds himself caught up in the goings on of the place as he is pressured in to teaching Klaus (Daniel Fripan) by his parents; Father (David Scheller) and Mother (Oona von Maydell). 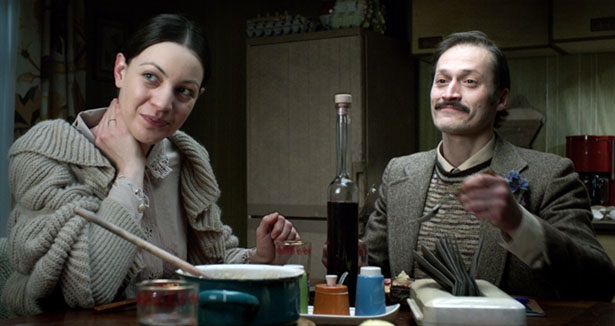 Things start off as they mean to go on, Der Bunker is very much a character piece based around the interactions of the four actors. Fripan has the job of acting as the couples 8 year old son, a feat made more difficult as the actor is actually in his early 30's. This plays into the whole mystique of the plot, Student pokes fun at it by at one point telling Klaus he looks quite old for an 8 year old, it seems he really is a fully grown man forced into the role by parents who don't wish to see him leave home. Bukowski has a more difficult role in that he plays an outsider whose role is more of an observer of the strange world he finds himself in. He gets a decent character arc regardless as he becomes indoctrinated to the way things work. Scheller as Father is very weird, kind of coming across like a more friendly Basil Fawlty (from British sitcom Fawlty Towers), while von Maydell has the most enigmatic role as Mother. All four actors are strong in their positions, each as good as each other in their own ways.

I had feeling as the credits rolled that a lot of what Der Bunker was trying to impart was lost on me, there are layers to the events and the dialogue spoken that made me feel I had missed something important. Just how much of this film is pure symbolism and how much it is just meant to be off kilter I do not know. Seems there are messages imparted about the education system, family relations and people growing up. There is some elements of horror and a sub plot revolving around an alien consciousness called Heinrich that has possessed Mother. Set design is functional but the location of a bunker is great in focusing attention on the world of the family with no outside distractions to get in the way. The camera work and editing are both appropriate for the type of scene, no short quick cuts, instead plenty of lingering shots and a few montages thrown in. Lighting was very good, especially in a few scenes where the colour of the lighting changed with no in film explanation. 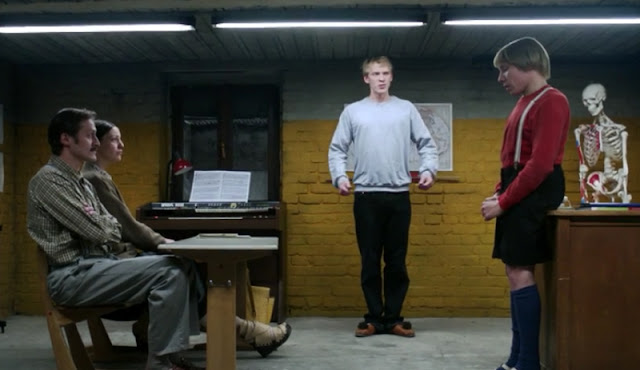 A short review this time around but there is not much more to say. as a satire on family this is a surreal and charming film that sticks in the mind even if at times things become a bit too symbolic. One to see if your after something very different to the normal. Der Bunker was released on 23rd August on DVD and Blu-ray as well as 90 day exclusive streaming on Vimeo and will be on most VOD outlets come December 6th thanks to Artsploitation Films. Check out the trailer for this below though beware there is some partial nudity.