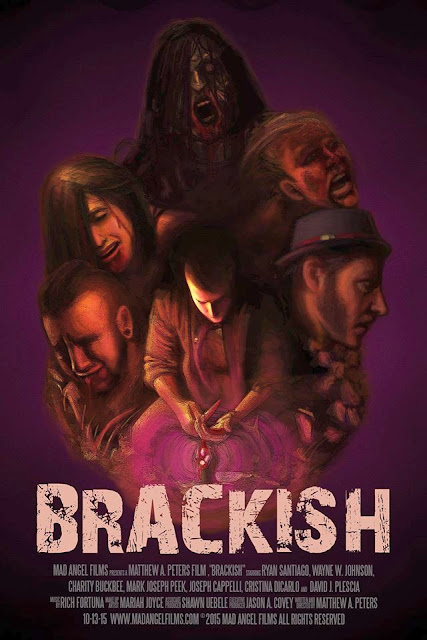 Brackish is an indie horror from Mad Angel Films that was directed and co-written by Matthew A.Peters whose previous work has included Half Dead. How do I know that last fact? During the film some characters are discussing their favourite horrors and state that film was the best one, a quick Google search reveals that is an actual film also by Peters; was a fun moment in a sometimes meandering movie.

In an attempt to try and cheer her brother Jake (Ryan Santiago) who is in depression after the violent death of his fiance six months previous, Tila (Charity Buckbee) organises an excursion with some friends to go on a camping trip to a remote ghost town where her and Jake's father used to live. There is a rumour that the town had become deserted due to a cult that had rose up in the area decades back and killed most the inhabitants. Unfortunately for Jake and his friends the cult is very much real, and is still operating to the present day... 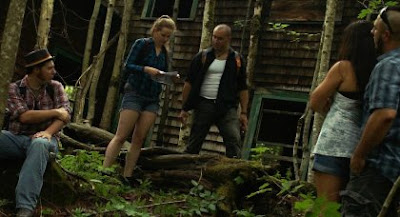 Brackish has grand ideas going for it, but ones that sometimes feel too large in scope for the budget suffering as it does with obvious constraints. Rather than criticise the film for this I actually find it admirable that quite a large idea came to some sort of fruition. This is actually a remake of Peters 2007 film of the same name, I do wonder what an improvement this is over that one (a higher body count at the very least). I at first thought this was going to be a supernatural horror. Instead we have a group of murderous cultists roaming woodland stabbing hapless victims left, right and centre. The effects used are practical ones and while on occasion they look slightly weak more often than not they actually come across as pretty fun to watch, there is a fair bit of blood and even a few intestines thrown into the mix. There is a strong H.P Lovecraft inspiration to the story line, this benefits the plot immensely (as does anything that references that master of true horror!) and if not for that connection I think my enjoyment and patience would have been far less.

The introduction sequence of a man out of his depth desperately writing a note of apology was a great way to start, it certainly got me intrigued. It is just a shame that this leads into a rough credit sequence that has the most soft middle of the road American rock song playing that totally dissipated all the energy that intro had created. Generic American rock keeps popping up time and time again throughout Brackish and gets in the way of the events unfolding on screen more often than not (the end credit song was not bad admittedly) but is a shame more appropriate music that would have fitted the films 'ancient terror' vibe wasn't chosen. On the subject of sound, I did notice some parts of the film where it was near impossible to hear what people were saying due to audio issues, this did only occur two, maybe three times though. 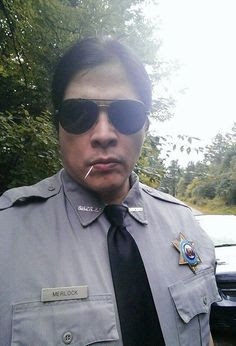 For a lot of Brackish a lot happens, yet nothing really happens. There is a whole sub-plot with a second group of campers that doesn't end up going anywhere, then for the main story big things happen that no one really reacts to. My attention did begin to wander a bit, there were just too many scenes of random characters running around woods being pursued or attacked by hooded cultists. I rolled my eyes when one character tries to run but immediately trips over, maybe an ode to classic 80's slashers but it just seemed a bit too cliched. There are a few flashback sequences throughout that were more interesting, shedding light on what caused the town's downfall. The film finally finds it's footing in the last fifteen minutes, it is a sublime time of perfectly paced sequences, cool story beats, surprising twists, and even a few zombies show up. I wish the whole film could have been tight as the finale as it was entertaining as hell, even if it did throw up some visible plot holes.

Some of the films problems are down to the setting, the exterior ghost town is mostly woodland, the interior locations dull and devoid of character. The acting is also another reason this was not as enjoyable as it could be. The actors are not terrible, they certainly look the part; a collection of muscular rockers and mostly assertive females, it's just they mostly aren't amazing in portraying the believable emotion that was needed. As an example hardly anyone seems able to show concern at all for people they supposedly care about. This can be seen when the boyfriend of one of the friends vanishes in the middle of the night, his girlfriend (whose tent he was staying in) just casually mentions it the next day to the rest of the gang and mildly suggests they go look for him, if characters don't seem to care about their friends then why should the viewer? Santiago and Buckbee are the best of the bunch so their lead roles were chosen well. Best actor of the movie though goes to Wayne W.Johnson (Night of Something Strange) as main bad guy Merlock. At the end of his first scene I thought he was terrible. He seemed to be too over the top, his actions too silly and I was ready to write him off. However I came to love his performance, he became the stand out character with some genuinely funny moments (the toothpicks!). He talked like I imagine someone from the cover of a heavy metal album would talk, by the end of the film he even looked like something that had stepped right out of a fantasy metal cover! A real highlight every single time he came on screen, an over the top gleefully bad guy but it worked (the female cult member was also great in her role I must say).

So Brackish is a mixed bag, if you persevere to the end you are in for a treat. There are some good parts on the way (the high body count, the flashback sequences) but for some the journey may be too much. I appreciate this is an indie film but overall this felt like a diamond in the rough, some parts sparkled (the final fifteen, Johnson) but often the way the neat story played out frustrated.