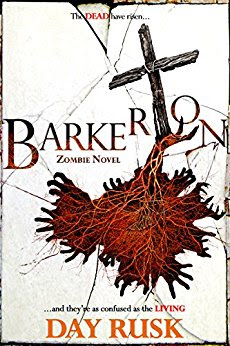 I think it was last month that I once again purchased an eBook reader after my others all up and died on me. I have five years of back log when it comes to digital books and so I am taking a kind of slap dash approach to choosing which order to read them in. Day Rusk sent me his horror book Barkerton at the years start, and today I have finished reading it. As I always say I have not had too much practice when it comes to writing book reviews so apologies if I end up talking too much about the story and not so much about the structure and writing.

An evil presence for reasons unknown comes to the small remote town of Barkerton in America. This evil force is able to ignite the darkness that resides within the inhabitants hearts and after just a few days the place has become a nightmare world where brutality and insanity lurks around every corner. The evil has also caused the dead to rise up from their graves who turn on the living in their confusion. The few pure hearted souls that are immune to the chaos band together to try and find a way to escape the Hell that Barkerton has become...

This novel manages to feel like several different horror genres all at once to begin with, there is a nice mix to keep the reader never quite sure what is coming next. Initially we have the demonic force, referred to as 'It'. This mostly exists as evil thoughts that are able to influence the weak minded of Barkerton, it also appears as a monster that patrols the town's limits, killing any who try and leave. It felt like the extent of Its powers were making a local man turn into a psychotic killer, but this is a red herring of sorts as this is the very tip of the iceberg when it comes to the utter madness that sweeps the town. A lot of the horror comes from the human inhabitants who insidiously are made to give in to their twisted desires, with parents killing and raping their family members, friends and neighbours. This leads to some pretty sick scenes of parents raping children, murdering new born babies and other such nasty stuff. The main female lead; Sandra is ever pursued by school bully Dustin who has become Its number one tool in its mission to consume the souls of the innocent. She forever faces this threat of rape, from various different characters throughout the course of the 270 page book. It wasn't very pleasant at all reading those parts and time and time again I wished for more traditional and less realistic horror as I didn't enjoy the suffering of the many victims. Thankfully there is more traditional horror which comes in probably my favourite parts of Barkerton.

Zombies are a key component of the story, yet they are very much a sub-plot going on rather than the main focus. It was interesting that the zombies are not the traditional brain hungry ghouls, but like the living are split between ones who wish to do no harm, and those who are corrupted. These have anger and jealousy towards the living and want to make them suffer. This leads to a couple of great traditional zombie scenes made more different by the fact that the undead have intelligence and so act slightly differently to how you would expect them to. I did like how there were quite a few different plots going on, from the mayor and his new found dictatorship at a barricaded school, to horror author Quirk and his new found love with one of the recently reanimated, to the continuing adventures of Susan and her quest to not be found by the obsessed Dustin. These stories all cross over with each other at several points in a natural, fluid way. I found myself liking the story more and more as it ramped up, it all leads to a satisfying conclusion and answers a few of the questions that were floating about.

The book is well written with it being easy to picture it playing out in your mind. The characters don't have too many surprises to them, but I was interested to find out what was going to happen to my favourites, and least favourites. Chapters for the most part are moderately paced, towards the end there starts to be more short, snappy paragraphs which help the excitement for the finale build. In terms of the plot while I didn't like the many scenes of violence against women I did think the concept of an ancient evil turning a town crazy, especially over a matter of just a few days to be compelling, I would have never guessed from the beginning just what was going to occur. Barkerton is a well written, often enjoyable horror that never becomes boring and so if your after something that handles zombies a little differently then check it out.