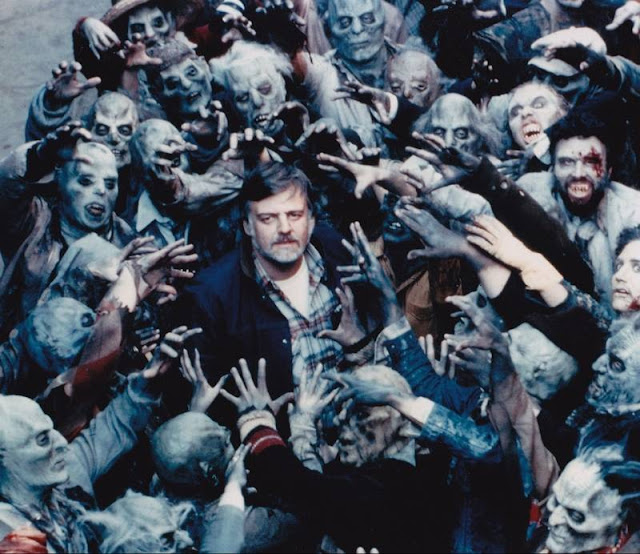 I'm sure if you even have a passing interest in zombies you would have heard the awful news. The King of zombies George A. Romero sadly passed away on Sunday after a brief battle with lung cancer at the age of 77. Rarely can one person be credited with creating an entire genre, Romero was one of those rare people. Sure there were zombie films before he came along but up to that point they were kind of dull, and the zombies in question were nearly always the result of Voodoo magic, most the time not even dead, just under control of some nefarious person, such as can be seen with 1932's White Zombie.

It was Romero who created the zombie film as we know it today; that of undead flesh eating monsters. It is not an exaggeration to say his films influenced countless people, that his films captured the minds of so many people who credit him as the reason for their works. In books you have amazing horror authors such as David Moody and Duncan P. Bradshaw who both say if not for his films they wouldn't have written zombie novels. The creator of The Walking Dead cites him as the key influence for the comics and by proxy TV show. In videogames again everything from Dead Rising to Resident Evil to the Zombies mode in Call of Duty all exist due to this legend of film making, he even got a guest appearance as a zombie in the classic Zombies map Call of the Dead. In films the affect is felt even more keenly, pretty much every single zombie film released over the last 50 years exist because of one man's vision and that is just a mind blowing achievement. Even this blog you are reading exists because of him. I loved Michael Jackson's Thriller video as a child, I used to watch the zombie section over and over again, yet it was only after watching Romero's original sublime trilogy (that were the first, second and third zombie films I ever saw) that I found myself hooked on zombies proper. 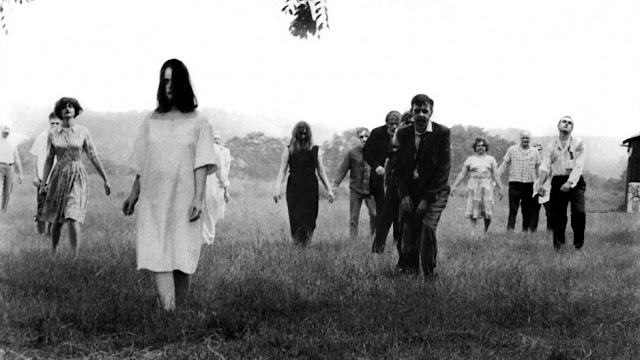 So in 1968 came the original The Night of the Living Dead. This was a black and white horror that stood out for many reasons. Romero was a genius in that he used horror as a means for social commentary. This film did so much that just had never been done before. The main hero lead was played by a black actor which was unusual in the 1960's, also the fact that he doesn't survive the events of the film due to being killed after being mistaken for a zombie by an all white hunting party at the films conclusion was not only shocking but was also a commentary on racial issues at the time. The fact that the human antagonist actually had the right idea all along was also something new, as was the fact that the attractive young white couple introduced end up getting eaten around the films midpoint rather than surviving. Watching it in modern day it is hard to find it as scary as it would have been but Roger Ebert summed up the feeling when the film first came out the best:

"The kids in the audience were stunned. There was almost complete silence. The movie had stopped being delightfully scary about halfway through, and had become unexpectedly terrifying. There was a little girl across the aisle from me, maybe nine years old, who was sitting very still in her seat and crying...It's hard to remember what sort of effect this movie might have had on you when you were six or seven. But try to remember. At that age, kids take the events on the screen seriously, and they identify fiercely with the hero. When the hero is killed, that's not an unhappy ending but a tragic one: Nobody got out alive. It's just over, that's all."

There are such classic scenes here, such as the survivors boarding up the farmhouse they find themselves trapped in whilst under assault by hordes of undead. Then there is of course probably the most iconic scene to come from the film; that of the little girl rising up to become one of the dead, eating her father and brutally butchering her mother with a trowel. NOTLD was the genesis for numerous tropes in the genre such as humans always being the real monster, how divisions within a group is always the cause for defeat, and of course the fact that anyone who dies can come back as a living corpse.

Next up came The Crazies in 1973. This featured a different type of zombie, here they were instead infected people, with the disease turning them into psychotic mad men. The army are swiftly called in and the town isolated. By the end of the film you realise the real crazies of this film are actually the faceless hazmat suit wearing soldiers who will stop at nothing to ensure the outbreak is contained, whatever the cost. 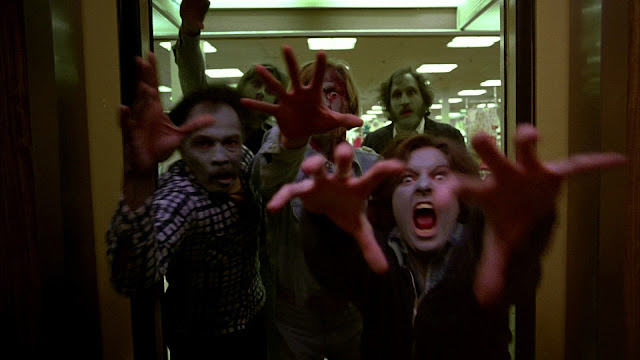 Five years later in 1978 comes what many consider to be Romero's finest work Dawn of the Dead. This one centred around a shopping centre that a small group of survivors take refuge in, thinking it will be paradise it instead leads to apathy and resentment between the group until human interference once again leads to the destruction of everything. This time being a commentary on capitalism with the zombies existing as metaphors for the Western worlds obsession with money. Correct me if I'm wrong but the classic 'open door and get swamped by zombies' trope originated with this movie. I have actually only seen Dawn of the Dead four times, and that is because my go to Romero film is Day of the Dead.

Day of the Dead arrived in 1985 and closes off the original trilogy. This is hands down my favourite zombie film of all time. Carrying on from the events of the first two films zombies now are everywhere, a group of what could be the final survivors spend their days in a claustrophobic underground bunker. Half the people there are army, half are scientists desperately searching for a cure. The rift between these two very different groups leads once again to death and destruction. Day of the Dead is the film that desensitised me to violence in films, I remember watching it as a teenager horrified, but too scared to look away as the bad guys got their comeuppance and were viciously pulled apart, one man having his head pulled off while still screaming, and fantastically nasty main bad guy Rhodes has the most iconic and classic death scene in any film ever as far as I'm concerned. Also who can forget Bub? 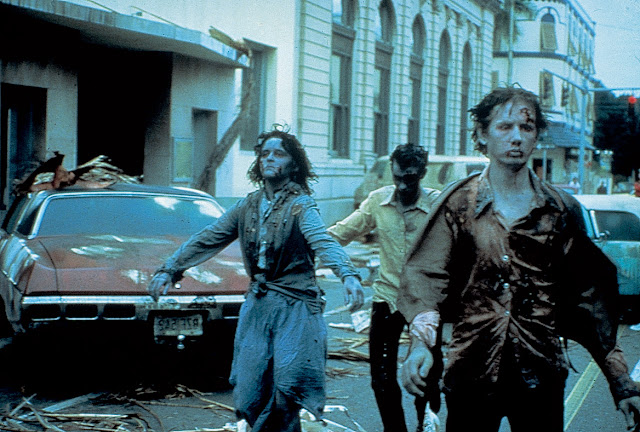 In 2005 the next instalment in Romero's world came to fruition; Land of the Dead and sadly I class it as the most disappointing film I have ever seen, I saw it at the cinema twice, on different sides of the world as I couldn't believe it was as bad as my first impressions were. I expected a worthy successor to the original trilogy but instead got a pretty bland zombie flick that seemed like it was trying too hard to make a statement (this time the divide between the rich and the poor) and I did not enjoy where they took the zombies. This one was set in a secured settlement where zombie hunters discover that the undead are changing and showing signs of intelligence. With expectations low I didn't really mind 2007's Diary of the Dead. There was a brief few years where zombie found footage films were the done thing and this followed suit. I may have only seen it once but I remember it being ok. Finally in 2009 was Survival of the Dead, another ok film, this one took place on a small island which two warring groups inhabited.

Despite the lukewarm reception I gave the later films there is nothing that can ever make me see the original three; Night, Dawn and Day as anything but stunning films, they are the foundation blocks for the entire genre that we know and love today. I shall most certainly be revisiting his legacy sometime very soon (and doing a new review to replace the awful original I did of Day of the Dead). R.I.P  George A. Romero the King of Zombies, The Rotting Zombie salutes you in classic Bub fashion! 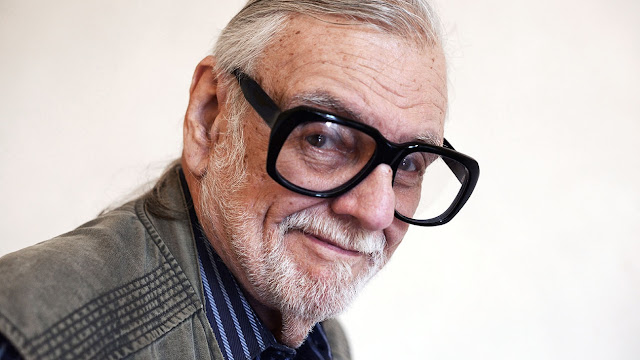