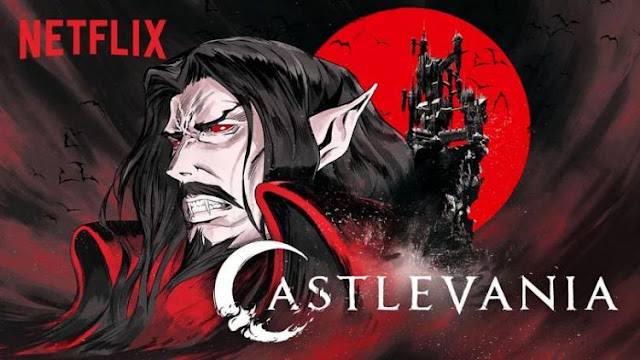 Castlevania is one of my most favourite video game series of all time, and also one of my favourite game styles of all time (Metroidvania, which is one huge level that opens up as you gain new abilities). Hearing there was a Netflix series out based on the games, specifically Castlevania III: Dracula's Curse I was interested to see how it turns out. Thankfully this four part cartoon is not only beautifully made, but also captures the violence and horror of the games.

Dracula (Graham McTavish - The Hobbit trilogy) falls in love with a human female named Lisa and they end up getting married. However the church mistake Lisa's medical skills as witchcraft and she is burned at the stake. A distraught Dracula in anger summons an army of demons from Hell with the aim of wiping out all humanity. Trevor Belmont (Richard Armitage - also The Hobbit trilogy); a vampire hunter gets caught up in this unfolding chaos while visiting a besieged town, together with a magic user named Sypha (Alejandra Reynoso) they attempt to protect the town from the evil hordes... 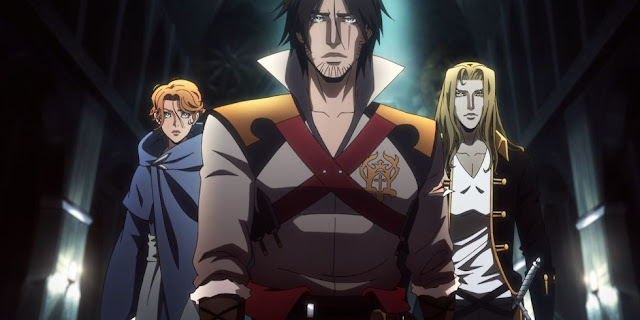 This first season of Castlevania is frustratingly only four 20 minute episodes long, which was apparently due to Netflix not having too much faith in the show. Well due to the great response the second season has already been approved and is going to have more episodes. The animation for this show is of a high quality, as is the voice acting, though it did feel weird that everyone in this fictional land has English accents when you assume they would be in the Romanian region. I was pleased to see this was handled maturely and seriously without the need to inject humour into the bleak goings on. It doesn't shy away from scenes of violence with even the first episode showing what appeared to be a child torn in half. Throughout the show we get lots of blood and violence, even if there isn't an over abundance of fan service. Favourite moment of violence for me was someone getting their eye whipped out in episode 2! This mature tone sometimes felt a bit overblown, everyone is so serious and talking in an adult way that it felt like they were trying too hard for what is essentially a cartoon.

The acting is great though I did find it hard to get to grips with main character Belmont. In the games he is a silent protagonist, here he is an alcoholic waster who has turned his back on his life's work after the church killed all his family line and excommunicated them. The theme of season 1 is really the evils of organised religion, it is religion that causes Dracula to go crazy in the first place, and the priests and bishops are shown here to be very corrupt and brutal in how they deal with people. This is set in the 15th Century and so this ideology is fitting. Fan service is apparent if you look for it but if you haven't ever played the games before the idea of Dracula is so well known that it isn't hard to get into it. That does lead into a complaint in that as awesome as that first episode is in the way it shows his reasons for his attempted genocide I did feel that could have been summed up in a brief two minute prologue. I say this because this then only leaves 3 episodes to tell an actual story, where with the mini prologue there could have been more depth. I thought it was pretty cool having a story that took place while Dracula is attacking the lands focus on a more insular story. Belmont is just in town by coincidence, and it's just the next target for that particular part of the demonic army, so there is no relevance to stopping Dracula. 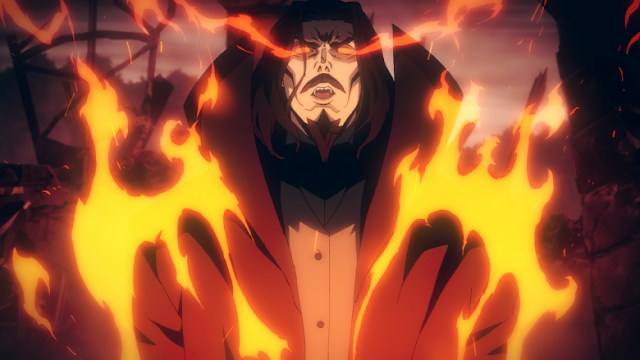 Castlevania was the perfect taster, but that's all it was: a taster. At four episodes this is far too short for its own good, I was left after the action packed finale wanting more, lots more. This is a violent and bloody cartoon that respects the lore of the games and is worth a watch if you like that kind of thing.