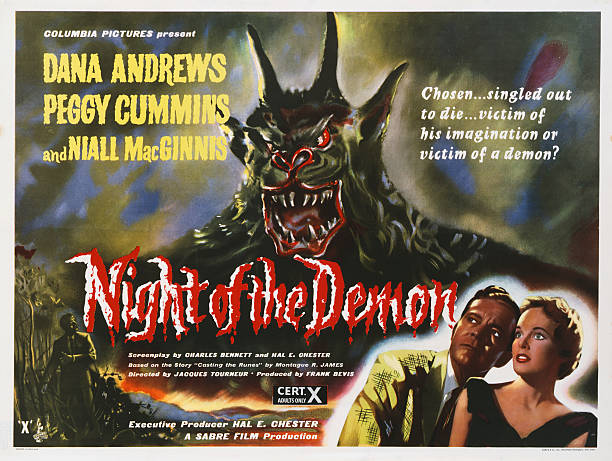 Until around a month ago I had never heard of Night of the Demon, however a chance conversation with a lady at my day job had her reveal to me it was the scariest film she had ever seen. I was intrigued and so come pay day I brought it on DVD. This film is known as Curse of the Demon in America and was edited down by 20 minutes to fit on a double bill.

Psychiatrist Professor Harrington was due to attend a paranormal psychology symposium where he aimed to expose Julian Karswell (Niall MacGinnis) as the leader of a devil worshipping cult. However before he was able to he died in mysterious circumstances, before he died he had spoken of having a curse placed on him by Karswell giving him a runic note. His colleague; John Holden (Dana Andrews) arrives in England determined to expose Karswell in Harringtons place, however he too is soon cursed, he is told he will die in exactly three days time. Holden is a huge skeptic and pays no heed to the warning, however the more strange things happen the more he begins to suspect that maybe something unnatural really might be happening... 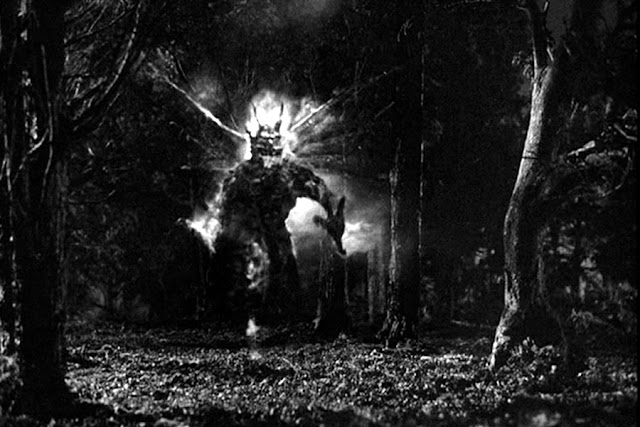 Watching this in modern times you have to keep in mind how this would have appeared back in the day. This feels from its time with plenty of scenes of characters talking amongst themselves with action and horror kept to a minimum. I found this to be quite entertaining as I really did have no idea what was going to happen, though like Holden I too believed it would turn out to be a hoax and so found it hard to invest too deeply into the horror aspect. I haven't seen many films from around this time period but both House on Haunted Hill and The Haunting turned out to be less supernatural than at first it seems so my judgement was clouded.

This is in black and white which adds a lot to the atmosphere, especially the scenes set outside. The prologue that has Harrington dying was well done with a nice set up to it. Later there is a similarly nice scene in which Holden is chased through some dark woodland by what appears to be sentient smoke. Then there is the satisfying conclusion that leads immediately to the 'The End' title such was the way of doing films at the time. The big pull for me was the titular demon, the woman at my work said how scary this creature was. It turns out the director Jacques Tourner (I Walked with a Zombie, Cat People) didn't even want this creature to be represented here, I can see why. It's not that it looks terrible (though is obviously very fake looking) but I feel without it the whole aspect of if the curse was real or just imagined would work better. As it is it only appears at two different moments and gives some nice enough scenes. Again I find it a bit cruel to complain about special effects on such an old film, but one part in which the runic note flies down a corridor has an obvious wire pulling it. 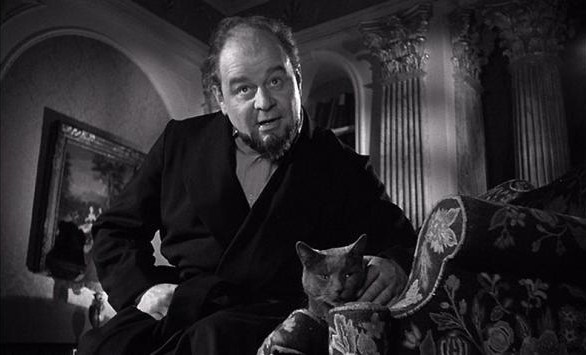 MacGinnis is great in his role as the sinister Karswell, certainly better than Andrews whose performance comes across as a bit dull. It was also nice to see some nice female roles here. I enjoyed Peggy Cummins part as Joanna Harrington, and I also thought Athene Seyler was great as Mrs. Karswell. The plot is simple enough but I liked that there were quite a few red herrings and some effective sequences. The hypnosis session with a murderer was actually pretty great and vaguely creepy, while the seance was a bit silly but was fun to watch.

Night of the Demon isn't a scary film, I think the PG rating is testament to that (I do feel children would probably be scared of the demon though!). It would have been scary at one point in time, and the plot of being stuck with a curse that starts to look legitimate is something that is still being explored today so is an element that never loses its power (The Ring for instance). While not really an essential watch it is cool seeing how horror was created some 60 years back.