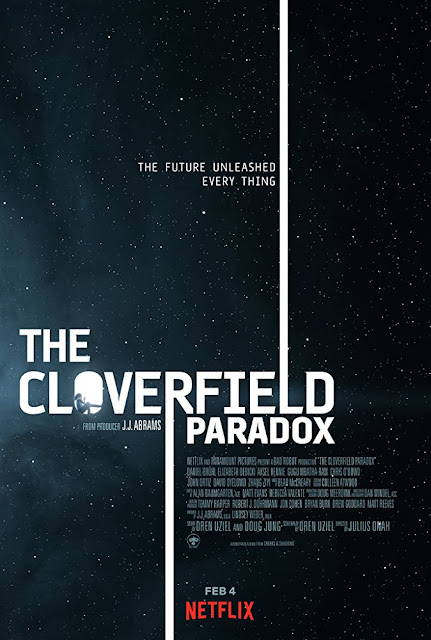 I am pretty sure my best friend thinks Cloverfield is one of the worst horror films ever made, personally though I loved it. Then there was 10 Cloverfield Lane which again was quite fantastic despite that bananas ending. So the announcement of The Cloverfield Paradox being out on Netflix filled me with a special type of excitement I rarely feel nowadays. I know people have said this is a bit of a muddle, and I know that originally it wasn't even meant to be part of the Cloverfield series but regardless of all that this is a damn good film that provides a lot more connecting tissue than Lane ever did.

The film takes place in the not too distant future, a future in which energy sources on Earth are rapidly running out. A space station (The Cloverfield) was built in order to test a Shepard particle accelerator which if successful could provide unlimited energy to the planet. This station is manned by a multinational crew whose many attempts to get the accelerator working over the years always results in failure. On one of their final attempts it initially seems to work, however once the systems have cooled down the crew discover the Earth has vanished. Their experiment has caused a paradox, one in which they seem to have entered an alternate dimension, and one in which something very wrong has occured back on planetside... 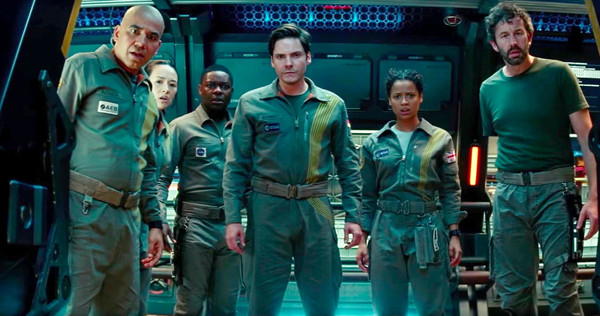 On top of liking the Cloverfield series anyway I have a huge love for space based films, especially where horror is concerned. I also love things like time travel/alternate realities and so this film felt like it was designed to appeal to me. In lots of ways this reminded me of last years Life, though here there is no alien creature running rampant, instead the horror comes from the mystery of what is going on and the way in which each of the crew meet their untimely demise. There was a feeling of Final Destination in the way that the ship seems to be going against the crew with death by drowning, explosion, and the movement of matter all leading to some memorable scenes. Talking of Life this ends on quite a similar note, not as effective but still a great way to end things.

The cast all performed well with no one who struck me as poorly chosen, instead I was surprised with some of the roles. I have only ever seen Chris O'Dowd in the I.T Crowd (a British sitcom) so it was nice to find that despite him playing a slightly comedic character here with Mundy I was still able to take him seriously. Gugu Mbatha-Raw (Black Mirror) was a good choice as Hamilton; the films lead also. I enjoyed the choices her character had to make, and how despite not agreeing with some of her actions she came across as understandable. The rest of the crew were also good, though I found Daniel Bruhl as Schmidt to always seem kind of evil despite him not acting that way, I think it was due to him always being really pale and covered in sweat that made me think that. I think I was actually most impressed with Roger Davies who played Michael; Hamilton's on Earth boyfriend. He didn't get much screen time yet he never had a bad moment. 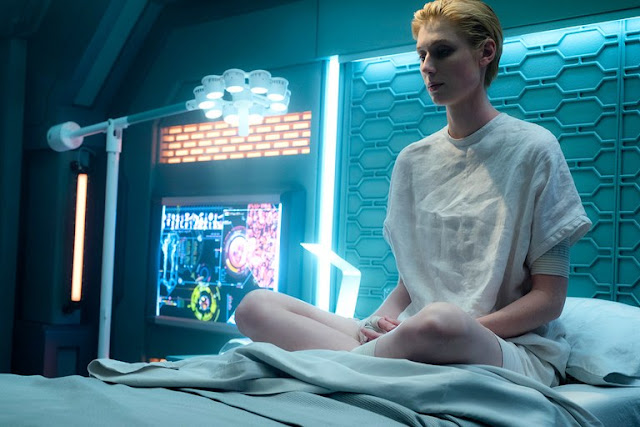 So not all the film takes place on board the lost space station, there is a subplot that takes place with Michael and has the biggest Cloverfield elements to it. These scenes are always claustrophobic in that it is only ever really centered on this one character, and he is usually in a building, or driving so we don't get to see the larger picture with him. One fault with this part is that he is texting someone on his phone, but to see what he was writing, and what the replies were I had to actually pause the film to read them. The weirder stuff happens on board the space station featuring the most mind bending parts. These include discovering a mysterious woman fused inside the ship, and objects transferring locations, such as a key piece of tech having somehow ended up inside one of the crew members when the dimension shift occurred. The special effects are impressive, but then I do usually find anything in space to impress me if the budget is good enough to show the goods.

As you can tell I really enjoyed The Cloverfield Paradox, as a stand alone film it did enough to keep me captivated. I did find some of the future technology to be a little too unbelievable, such as the fact that being the opposite side of the sun is not a problem when it comes to rescue. This answers some of the questions relating to the franchise as a whole, as silly as those answers may be, even without that though this is a decent space based horror.

Posted by Daniel Simmonds at 10:44