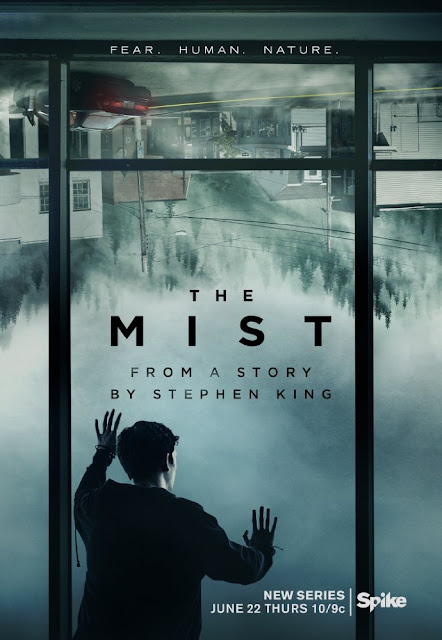 What is wrong with the world when a stunning and beautiful show such as The Mist gets cancelled after just one season? I have just finished watching this ten part season over a three day period and was shocked to discover the story will likely never be finished now. This is based on the Stephen King short story of the same name, my usual disclaimer that I don't rate his work, yet once again a fantastic piece of media has been born from his words.

One day a thick mist rolls into a small American town in Maine, the inhabitants soon discover that madness and death comes to those who spend too long in the mysterious substance. Survivors have barricaded themselves in the mall, these include Eve Copeland (Alyssa Sutherland) and her daughter Alex (Gus Birney). Alex's dad Kevin (Morgan Spector) meanwhile is at the local police station when things go south. He joins up with a drug addict named Mia (Danica Curcic), an amnesiac soldier called Bryan (Okezie Morro), and Alex's best friend Adrian (Russell Posner) in order to find a way through the deadly mist and to his family... 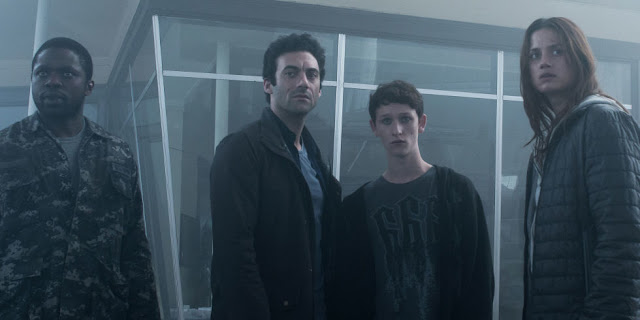 To be honest I was hooked from the very beginning, the awesome prologue when Bryan wakes up in the mountains with no memory and in close proximity to the mist. This is a show that revels in being bleak, yet also with a justice that comes to those most deserving of punishment (and some that certainly do not). The core family of characters are in strife from the offset. Shortly before the fantastical horror begins Alex gets drugged and raped at a party, while Eve and Kevin have been having marital problems long before that awful event happened. I was a bit curious to see how a journey across a small town could last ten 45 minute episodes without feeling dragged out, yet there seemed to be no filler, everything that happens felt relevant even when characters are experiencing self contained stories within single episodes.

I enjoyed that there are various sub plots going on so that your attention never starts to drift. Alex and Eve have nearly as much story as Kevin and his group do. With them they are experiencing a Dawn of the Dead style break down of law and order. The group of survivors they are with are slowly tearing themselves apart as the mall manager creates his own little empire of increasing brutality. Elsewhere the survivors trapped in a church have a story that extends way past the fleeting visit by Kevin. Where the mall had a study of what people are capable of once hysteria and paranoia infect a group, the church segments is a study of religion in the face of insanity with both going to some dark places. There are a lot of characters here yet many don't really even get names, more the majority are background characters who are needed as they add to the feeling of mob mentality. 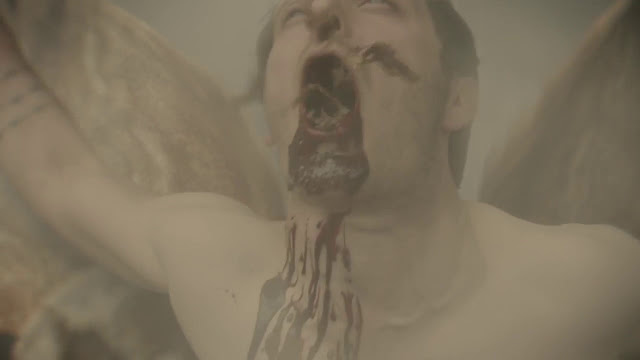 Among the main cast there was not a single bad actor here, The Mist features characters who all feel like flawed people. Initially I said to my best friend who I binge watched this with that I didn't like any of the characters, and they do a lot of questionable things throughout the show. Kevin is so desperate to get to his family that he will do anything to anyone to ensure he completes his appointed journey, and has a bit of a vindictive streak. Mia is more interested in getting high than helping anyone out. Then there is Eve who is deeply controlling of her daughter and resents the love her dad and her share. No one character really seems that innocent but this helps in making them feel more realistic, people have their own motivations and no one is really selfless apart from maybe Bryan (in terms of main characters) and that is due to him having no memory of who he once was. By the end of the ten episode run I had really came to like a lot of these characters despite the many flaws they had, this is an example of good writing. Even side characters become captivating, Nathalie (Frances Conroy - American Horror Story), Father Romanov (Dan Butler), even the chief of police Connor (Darren Pettie) is fascinating in the arc they have.

I don't know why it didn't click with me before but watching this I was constantly and heavily reminded of the Silent Hill video game series. The mist hides all sorts of monsters that swoop down on any who get caught up in it. It often seems that the method of death relates to the victims biggest fear or belief. So someone who is afraid of the dark is swallowed up by a black shadowy figure, a devoutly religious person is (awesomely) dispatched by the four horsemen of the Apocalypse. Elsewhere people are killed by bugs and snakes and people are haunted by dead people they once knew and who feel guilt for, such as a mentally unwell mother who died in hospital, or children someone once bullied. There is a lot of CGI here and it is mostly good, not great, but acceptable. The mist effect itself always looks fantastic, there are some great scenes of characters running through the stuff. Seeing a giant moth erupt out of someone's back, or insects crawling over a man...not so amazing but still good enough not to detract. Most impressive were the dead bodies everywhere, people in pools of blood with severed limbs, or corpses that seem to have had the life sucked out of them. This show doesn't pull any punches when it comes to showing the fates of people, even when it comes to children. 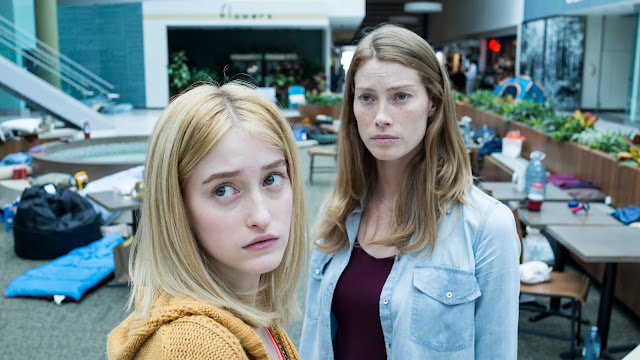 It is frustrating that it all ends on a series of unresolved plot threads, yet I can't blame the show for this, I really feel a second season would have been great, there was a logical place The Mist could go to with plenty of carrots dangled to hint at what could come, even dead characters could have returned such is the nature of the evil substance. Despite this ending prematurely it was still a great season finale. The directing, editing and performances, as well as the cohesive nightmare vibe just had me hooked. Helped in no end by some genius choice in music, one episode has a perfectly chosen Nick Cave song, season finale features the song Perfect Day set to the perfect visual accompaniment.

I don't often give things ten out of ten and I don't do it lightly even though it doesn't mean something is perfect. With The Mist there were ten episodes of heart in mouth excellence, this was a stunning show with a stunning story and a whole stable full of great actors. Essential viewing for sure, even with an incomplete story.