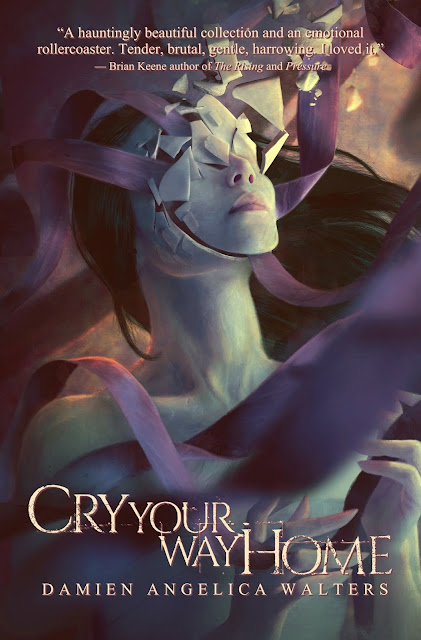 It is always such a good feeling to finishing reading one of the many books I have been given for review purposes. Cry Your Way Home is an anthology of short horror stories written by Damien Angelica Walters. The 17 stories here have a definite feminine angle to them with many revolving around relationships between mother and child, or featuring female protagonists, this is no bad thing at all.

This reminded me quite a bit of Mercedes M. Yardley's anthology Beautiful Sorrows in that a fair few of these stories are both abstract in nature as well as coming across as a kind of fairytale. This is best shown with opener Tooth, Tongue, and Claw, and A Lie You Give and Thus I Take which is a mash-up of several different well known fairytale situations, and which I couldn't really tell what was going on. Not My Circus, Not My Monkeys: The Elephant's Tale was another really quite weird one, somehow coming across like a mix between Chuck Palahniuk's Haunted and a Nick Cave song, with a grimy circus and an elephant main character leading to some quite surreal passages.

Many of the stories here deal with a parents loss of their child, this concept is explored several times, often with the child having committed suicide, or at least suspected to have. On the Other Side of the Door, Everything Changes is realistic horror in the way it switches between the perspective of the unsuspecting mother and her distraught daughter. Falling Under, Through the Dark has a grieving mother trying to reconnect with the moment her son drowned. Umbilicus has a child again feared drowned, and another mothers attempts to discover exactly what happened no matter the cost to the world. Then there is Sugar and Spice and Everything Nice which again brings up suicide but with a bizarre almost Robert Rankin style short about a Frankenstein child.

Many of the stories also deal with people changing in ways that sometimes are reminiscent of H.P Lovecraft's idea of ancient ones, and sometimes people being replaced with evil copies of themselves. Deep Within the Marrow, Hidden in My Smile has a teenage girl get possessed by her creepy step sister, The Hand That Hold, the Lies That Bind has a teenage girl getting possessed by a demonic type being, while final story In the Spaces Where You Once Lived is a horror that works on two different levels. Firstly that the real world horror of Alzheimers has cruely taken a woman's husband from her, but then ancient evil doubles down on this loss of self. This Is the Way I Die is another one with a main character being replaced, here it becomes quite abstract, but also serves as an analogy for a controlling relationship changing who you are. Talking of bad relationships Take A Walk in the Night, My Love was another strong one and gave me echoes of Get Out with its story about hypnotism.

I didn't think much of these stories when I first started reading this but Walters has a knack of really making what shouldn't be a frightening situation become really quite creepy. On paper The Floating Girls: A Documentary sounds ridiculous, yet the descriptions of these girls floating off into space sent a real chill down my spine. The Judas Child is another one that stuck with me for how unsettling it is, though it was Little Girl Blue, Come Cry Your Way Home that chilled me the most. This one just got more and more sinister as it went on leading up to a revelation that was great even if the story ended on a bit of a silly note. That just leaves the final two I haven't yet mentioned; S Is for Soliloquy is a rift on the superhero tale, while The Serial Killer's Astronaut Daughter isn't really horror based at all, but was interesting nonetheless.

Cry Your Way Home is an anthology that has an obvious scope to it with many stories revolving around females and families. It could be seen that there isn't quite enough variation to the stories here. Personally though I found a lot of these to be both achingly sad and creepy at the same time. The more fairytale fantastical ones here were not for me and left me cold, but the majority I did get on with. These are stories that deal with characters experiencing raw pain, blood and guts is low, but a nice chunk of cosmic horror is to be found here. Cry Your Way Home was released on 5th January earlier this year thanks to Apex Publications.