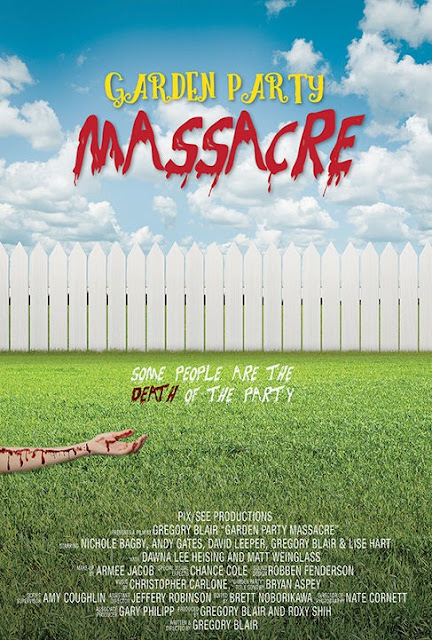 The award winning Garden Party Massacre is a comedy horror film that was written and directed by Gregory Blair (Deadly Revisions) who also plays one of the main characters here. While personally the humour often wasn't always to my tastes this film was inoffensively fun, and I did smile on a couple of occasions.

Caleb (Andy Gates - The Blessed Ones) and Addison (Nichole Bagby) are a couple who have decided to have a garden party for a small group of friends. These friends include among them Wesley (David Leeper), Lincoln (Blair), Reena (Lise Hart - Deadly Revisions), and Melanie (Dawna Lee Heising - Revenge of the Samurai Cop). It isn't too long into the party however when one of the group is found murdered at the hands of a pick-axe wielding madman (Matt Weinglass - Bright). Without access to a phone, and trapped in the house the group must work together to find a way to either contact the police, or get past the madman to freedom. 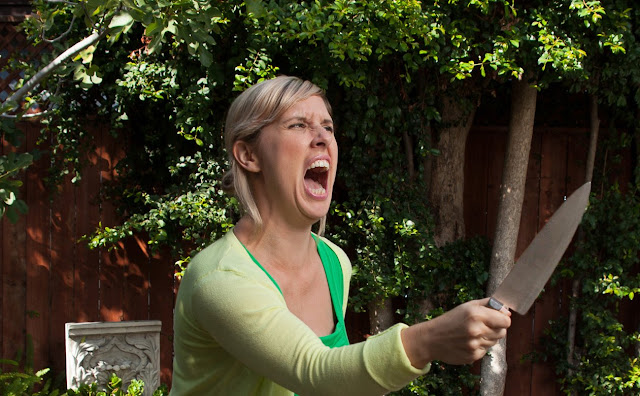 If I had to describe Garden Party Massacre in one word it would be 'wacky'. This is very much a comedy world the characters inhabit which is reflected in the over the top acting and facial expressions of the small cast. Being a comedy it explains away a lot of the issues you would normally have watching a horror in relation to how characters act, but also goes to great lengths to explain plot conveniences such as why no one has a phone on them, or why the internet doesn't work on Caleb's computer. After a great intro credit sequence I was all set for the titular massacre to begin, and it does eventually start but a lot later into the film than I expected. This is no bad thing really, at 70 minutes long this never drags, and there is a third act plot twist that I definitely did not see coming, which leads up to a really fun ending.

The core of the film is the group trapped in the house with the madman prowling outside, and the many plans they come up with to evade him. Characters are at their best when they are together, I loved the editing used for their many reaction shots, a favourite was when each shot was on a different characters face with the switches between these shots getting faster and faster. This fast type of editing was something that was used time and time again to good effect, in fact the first time I really enjoyed a joke was when a character was torn with indecision on which weapon to use, so the camera kept flitting from weapon to weapon in a loop. This then brings me to the sound effects used, again going back to the fast editing there are some really complimentary sound effects used that seamlessly integrate with this aspect of the film. 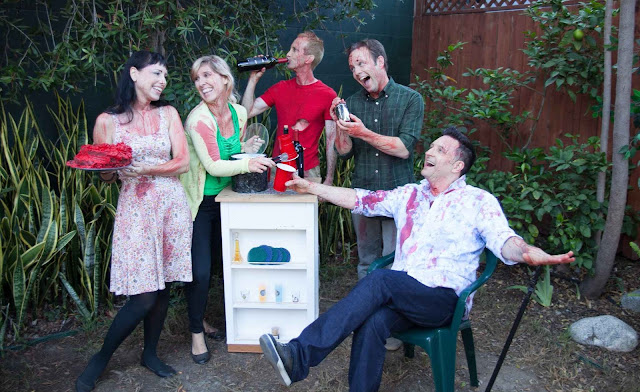 The actors all gave fitting performances for a wacky comedy, my favourite was Blair's dorky Lincoln who delighted just through his awkward body movements when he didn't know what to do, without even speaking in these parts he just exemplified the tone of Garden Party Massacre. I didn't even realise at the time he was also the director, but it makes sense he would give the best performance knowing exactly what he was trying to create, much like Jim Klock who gave a similarly fun performance in Massacre on Aisle 12 that he co-directed. I often find the humour in American made comedy horrors to not be completely to my tastes, but unlike others I have seen such as Aisle 12, and The Slashening that sometimes went a bit disgusting this always stayed almost a family friendly level of fun...if family friendly stretched to include a massacre at a garden party!

Special effects are where this film shows its indie nature the most with nearly every single kill, or moment of violence occuring just off camera so that it can be inferred without needing to show anything. With the initial kill occurring in its own bubble relatively early on it was shame that we didn't get to see that, though I guess for plot reasons that couldn't really happen. While anything of a more horror based nature does happen off camera there was still a great montage of characters getting splashed in dollops of blood, and one nice shot I remember of a character coughing up claret. There was less of a body count amongst the core cast than I had expected and so guessing who was going to be the next victim never really became a thing. 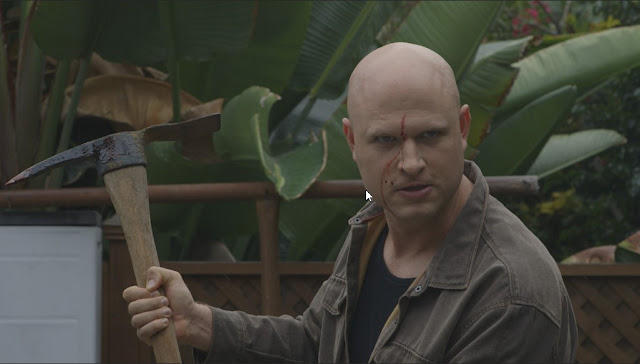 I enjoyed watching Garden Party Massacre, I may have felt a little bit disappointed how a lot of the plot up to the third act rolled out, but the cast all gave entertaining performances and were a likeable bunch for the most part. The soundtrack and sound effects added a lot to this and added a lot of flavour to the zany vibe going on, while having a horror film set during day time is always an interesting idea to use as not too many do that. Garden Party Massacre is due for release later this year via SGL Entertainment so keep an eye out if you want to check it out for yourself.