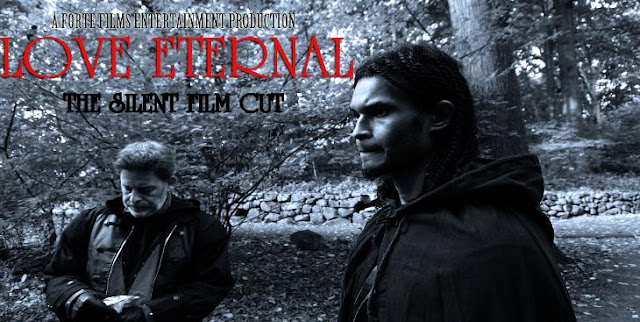 Love Eternal: The Silent Film Cut is the latest short horror film from Forte Films Entertainment that is again directed and co-written by Matthew Forte (Anna, The Babyface Killer), with Arriana Vasquez as assistant director and co-writer. This is probably my favourite short film I have seen of theirs, this is down to the neat style gone for, one that plays to the strengths of the filmmaking.

This near 8 minute short is based on Bram Stoker's classic Dracula story but plays around a bit with the ending. Here we find Dracula many years after the end of the novel's story with Mina by his side as his vampiric bride. A prologue reveals that the vampires powers are fading and so he finds himself in a life or death struggle with an old adversary...

This has been made to mirror the style of silent horrors of the early 20th century, as such there is no spoken dialogue, or even sound effects, instead what you get is music constantly playing, while dialogue appears on screen as intertitles. To compliment this the footage has a grainy overlay on it creating an effective homage to how these old horrors look today. In particular I was taken with the mournful piano based soundtrack that suggested just by its sound that an end was coming. The small cast of four (Dracula played by Alfonso Marquez, Mina played by Felicia Garcia) don't have to worry about spoken dialogue and so tell their story by actions. The performances are less exaggerated than actors in these original type of films gave but it was still clear what was going on. If I had any complaints about the way the dialogue is shown is that there is quite a lot, especially to begin with, I wondered if it could have been streamlined a bit. 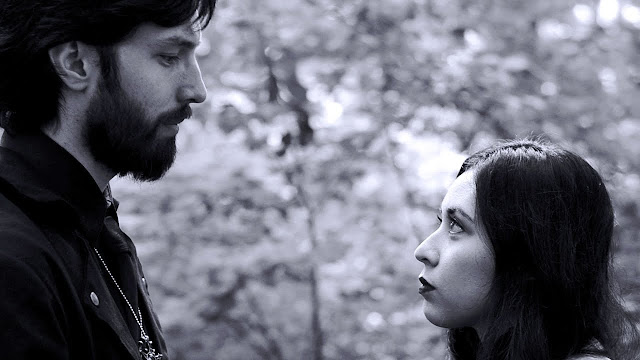 The meat of Love Eternal is a fight between Dracula, Mina and an old foe. This was fun to watch and had some great iconic Dracula moments, my favourite when the Count grins at his opponent mid fight. This whole sequence had some nice editing to it, I liked how shots would get out of focus. I also liked the Mina is shown to be a capable fighter herself, a nice modern touch for this homage to have.

The tale of Dracula is one that pretty much everyone knows, and most will be familiar with the style that Love Eternal has gone for. For me it was the soundtrack, the tragic vibe, and the retro visuals that worked well the most. Love Eternal: The Silent Film Cut is free to watch on YouTube, it's worth a watch if you like your vampires the old fashioned way.