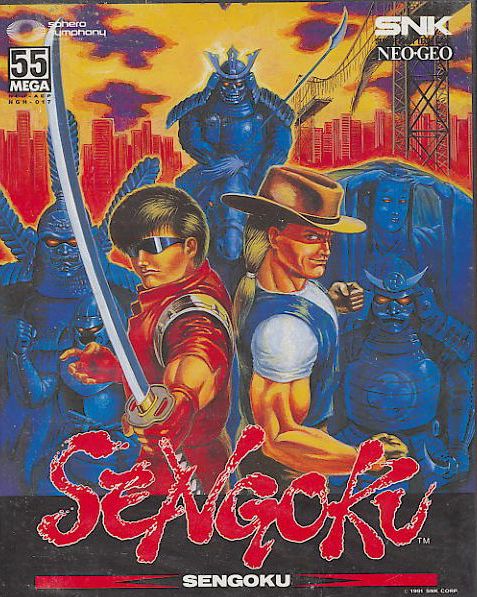 Back in the 90's my favourite type of video game was the scrolling beat-em up, and it was a golden age for those. Having recently purchased a Nintendo Switch I wanted to test the waters of the online store, and so seeing Sengoku there for a cheap price I decided to pick it up. Now the benefits of this port is that you can set how many lives you want to have. I decided right away I would bump up my lives to the maximum of 99, and with infinite continues it came down to not how hard an experience this would be, but more just how much fun is the game? As an aside; apologies for the wonky pictures used, I couldn't find any decent images online of the game so had to resort to taking my own!

A portal to an ancient Japanese version of Hell opens above an unnamed American city, and hordes of demons invade. It turns out that 400 years previously an evil Japanese warlord had been defeated by two warriors and that he had vowed to some day return. It turns out that the descendants of the warriors both live in the city and so they set out to defeat the warlord and close the portal to Hell... 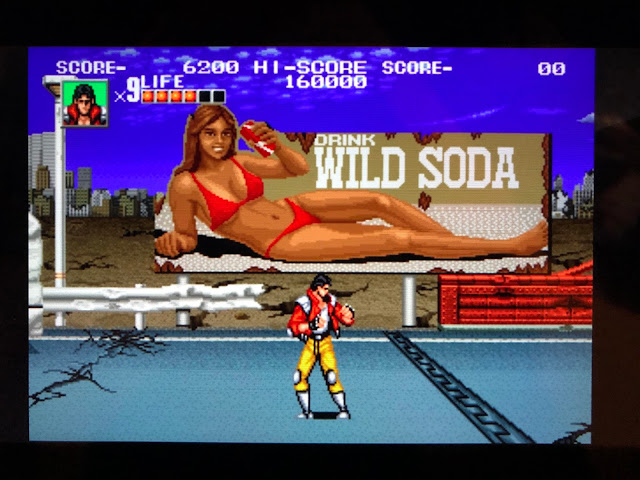 Upon loading this up you are given two options; play the Japanese version of the game, or play the North American version. I played through the game on both these options and as far as I can tell aside from the subtitles changing language I found the North American version to be slightly easier. I guessed the story the first playthrough and was mostly correct in my assumptions. It was sad to see that the English translations are at one both terrible and lazy, so much so that I enjoyed the Japanese version just for the fact I couldn't tell what was being said in cutscenes.

I really enjoyed playing Sengoku and I think a lot of that has to do with the level design. Each stage flits between the increasingly apocalyptic city of modern day, and the Hell realm of the twisted ancient Japan. One moment you might be fighting through city streets, or through a shopping mall, next thing you know you're battling a mural come to life on a Japanese temple, or fighting samurai as an entire army watches on in the background. I loved the transition used here as it made every level plain exciting, you just do not know where you are going to be fighting next. It was also cool that the antagonists floating fortress repeatedly appears in the background of stages with enemies often entering the stage by running in from the background. The game is made up of five stages, and one boss stage, the final proper stage is more traditional in that it takes place in just the one location (the antagonists floating fortress) rather than going between different places. 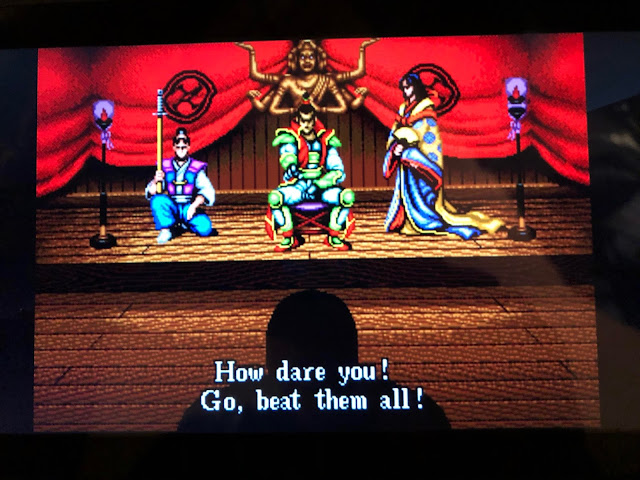 So you fight plenty of samurai and ninjas but you also fight your fair share of demonic type creatures that come from myths and legends, I myself recognised the Kappa monster, but there are also dragons, huge beasts and evil spirits that appear, plenty of variety throughout the game. Each stage ends in a cool boss fight that is usually made up of two parts. The first part is the boss in it's human guise, then mid fight it transforms into a monster usually. These bosses are memorable, such as for one boss the fight takes place entirely on the back of a wild herd of ghostly horses, another boss bursts out from behind a paper screen in the background. In between stages you get a cutscene that introduces the boss for the next stage, this was a neat idea.

If it wasn't for my infinite lives this would have been a punishing game. Your character has a life bar of sorts but it only takes two or three hits from any enemy and your looking at losing a life. This goes both ways though with many enemies dying in only a few hits with bosses not too much stronger. On the final stage there were some enemy types that were still dying in just one hit! In terms of fighting this is quite a basic scroller. There is no scenery you can pick up and use as weapons, you have just the one attack button along with a jump. The third button is reserved for the games unique concept, you are able to summon ancient warriors to fight in your place. You have a ninja, a samurai, and a wolf that for a limited time can be summoned. However it's a bit fiddly to select them in the heat of combat and so I just played as the modern day guy for the majority of the game. Some enemies drop orbs that grant you limited time abilities such as access to a couple of different swords, or magical abilities which added some variety. 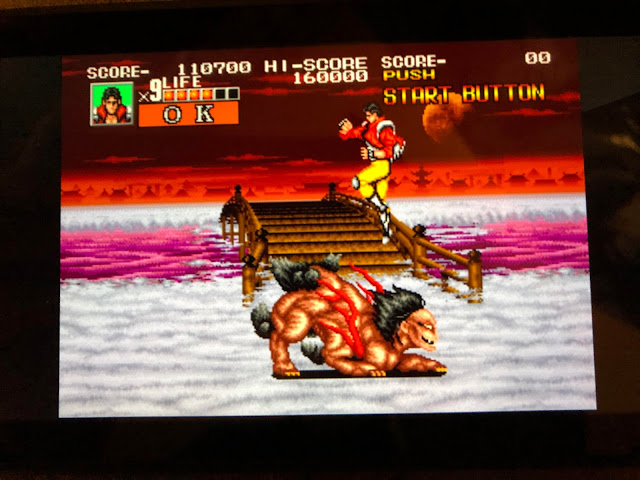 Sengoku succeeded for me because of how fun it was playing it. Sometimes it is good just to switch off your brain and get in some mindless digital violence. I can only imagine it would be even more fun playing through with a friend. I loved the level design, the enemy design, and the great old style of Japanese music. What I didn't like was the dreadful translation effort that tries its best to rip away any sense of immersion in the goings on, though I do fear the original Japanese has just as bad dialogue, but least they get to enjoy the lines of dialogue spoken throughout this. There are three games in the Sengoku series and so later in the year I shall be trying out the others if I can find them.