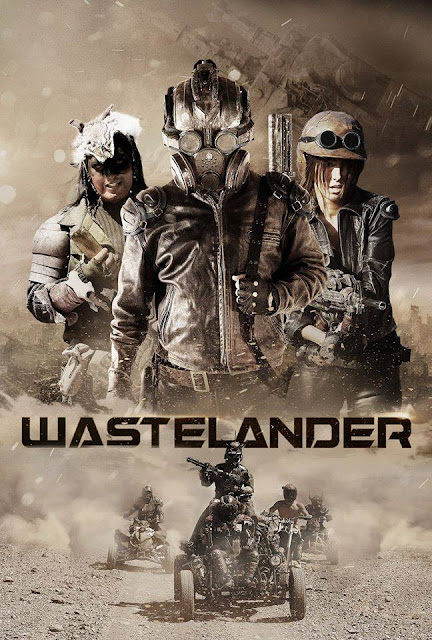 Wastelander is the second post apocalyptic film I have seen this year, Blue World Order being the other one. This is influenced far more by the Mad Max series and shares a similar group of characters, though to me it shared also a lot with the Fallout series of video games, both in the costumes characters wear, and also where the plot itself goes to.

Tom Hanks look alike Brendan Guy Murphy stars as Rhyous; a wandering wastelander on a post apocalyptic Earth who is on a quest to discover Eden. Eden is said to be one of the last surviving pre-apocalypse places left intact on the planet. In Rhyous's way though are an army of barbarians known as The Scourge, these rule the wastes through violence and fear and think the past should be left behind, and that anyone seeking the mythical Eden should die... Wastelander has many problems, but it also does a lot that delights. There is always something new going on here with very little downtime in between shootouts, gladiatorial type fights, car chases, and close quarters combat. It is all done with an obviously low budget yet plenty of shaky camera work, CGI, and green screens do their best to keep this world feeling as realistic as possible. The best thing about this film is the wonderful costumes that all the characters wear. Most of the enemies Rhyous faces, as well as him and his comrades all wear outlandish Mad Max style armour and masks. I could never work out why so many people wore cool looking masks when there didn't seem a need to, but it seemed to be the fashion as no one bats an eyelid with people walking around looking like futuristic soldiers as a fashion choice. This did get confusing at times as one of the main antagonists looks nearly identical to Rhyous.

Both the good guys encountered and the bad guys looked awesome then, with the main lead you have Jon Proudstar as Solek who was kind of a comedy character, and who was distinctive due to the red and black face paint he wore. You also have the easy on the eye Carol Cardenas as Neve whose costume was quite complimentary, as was Murphy's to be fair. The Scourge had a unified look of red and black combat armour and it was nice to see a large mix of male and females in the gangs, this wasn't all male centred with even the main Scourge leader being a female. I haven't seen Mad Max in a while but don't really recall many females in the wasteland crazies. I also liked the look of the wasteland, it is never revealed exactly how the world came to end, other than it being suggested some sort of religious war occurred. The scenery is full of cool incidental detail, such as the ruins of a crashed space satellite, rusting spacecraft, and my favourite which is the moon in the sky having a gigantic piece missing! 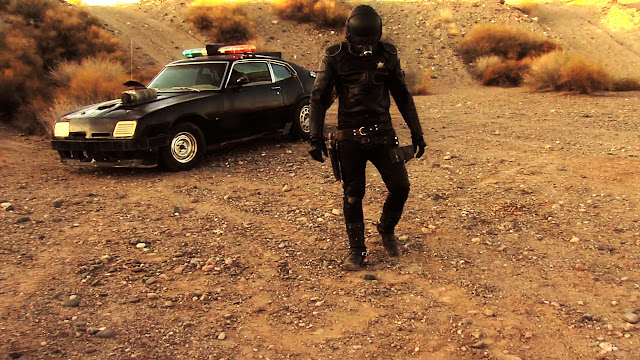 This is very B-movie in feel with everything feeling kind of cheesy and low budget, yet at the same time being an enjoyable romp that mostly makes sense. I wish that director and writer Angelo Lopes had doubled down on the B-movie feel and put a lot more over the top violence and gore, as at times this feels quite sterile in the action it shows. People are stabbed, shot and killed but usually this translates to a small amount of blood supplemented by CGI, nothing seems very vicious. There are a few cool shots of stronger violence, a car crushing someones head comes to mind, as does someone getting the flesh dissolved off their face by acid, but I felt this should have been constant to really embrace the cheesy B-movie feel..

This came into the biggest problems for me with the hazy editing that made some scenes not really make much cohesive sense. The quest for Eden is abruptly wrapped up with no explanation of how it came to be found, it seemed Rhyous for all intents and purposes teleported there for a scene or two before suddenly being back in the main plot world. I don't know if there wasn't time to put in scenes to show better transitions but at times it hurt Wastelander. This also applied to some of the action sequences with characters being shot off camera, and going back to the acid death a spray of acid randomly came from off camera with no explanation of where it originated from. The CGI works for the most part though if it does look a little bit dodgy at times. One of the huge guns used blasts huge CGI holes in enemies chests that was a lot of fun to watch, while in the majority of the gun fights are between laser gun carrying people, though there are a few who use more traditional weaponry, and even Mad Max style ones such as comedic huge hammers and swords. 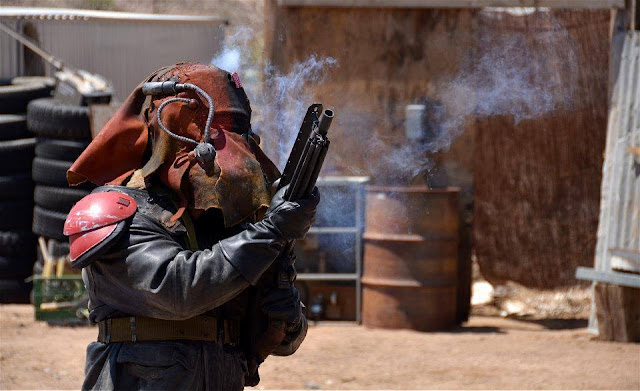 I preferred Wastelander to Blue World Order, it made better use of it's time and it had much better action sequences, and the low budget had a certain charm to it that fitted the feel of a post apocalyptic movie well. This has problems for sure, mainly the sometimes muddled editing, and an over reliance on CGI, but the costume design is fantastic, the action scenes exciting, and the soundtrack is pretty great, especially the synth track that plays over the end credits. Wastelander came to VOD on February 20th including Sony Playstation, YouTube Movies and Comcast, it is due for an unrated DVD release on March 13th, all thanks to Indican Pictures.

Wastelander [OFFICIAL TRAILER] (2017) from Indican Pictures on Vimeo.
Posted by Daniel Simmonds at 09:34

Lots of good action, I enjoyed it.

Wastelander isn't a perfect film, but it's a very interesting one, and it's worth the watch.